Since the signing of the JCPOA and the resulting influx of cash into the Iranian economy, Tehran has been emboldened, and its bad behavior has been ignored, As Trump outlined in his strategy, Iran’s offences are not limited to its nuclear program. Since sanctions on Iran were lifted in 2016, Iran has invested in destabilizing many of its neighbors.

On the other hand, Iran has adopted the policy of suppression and execution as its main domestic policy.

The Iranian people are frustrated with high unemployment, outlandish living costs, Lack of public services. According to the report by NCRI On Monday morning, October 23, more than two thousand people, whose property was plundered by institutions affiliated with IRGC, judiciary and other state agencies, rallied in front of the regime’s parliament.

The repressive police force using batons, assaulted the demonstrators and beat them brutally, and tried to disperse the demonstration in which women played a very active role, but was faced with the resistance of the people.

Protestors chanted: “Shame! Shame on the police force! ,” “Cannon, machine gun, tank no longer works,” “death to the dictator.” When the police arrested some people, especially women, and wanted to take them by force, people chanted “You ISIS, you ISIS, death to ISIS, let them go,” “Police, shame on you, let our fellow citizens go.”

Some of the slogans were: “Death to Saif (head of the Central Bank),” “Shame on Rouhani,” “Larijani is apparently the judge but a thief’s accomplice,” ““Theft is institutionalized, the hearts are full of hatred,” “For traveling to other countries, they have taken our money,” “They had a budget deficit, but they have taken it from our money,” “Caspian institute has stolen, the government has supported it,” “Saif betrays, Parliament confirms,” “I will not give up unless I get my rights,” “Injustice is enough,” …

When a number of participants in the demonstration including women were attacked by police forces, other people at the scene joined and defended them. People chanted “I kill, I kill whoever killed my brother” while throwing rocks, wood and other objects at the police.

Subsequently, the police encircled the protesters so that they could not leave the surrounded area, but the people broke out of the siege and started marching towards Baharestan square. The repressive forces tried to control the population by bringing in a motorized unit, but the people continued their rally while throwing rocks at them. A large number of people joined the protesters. 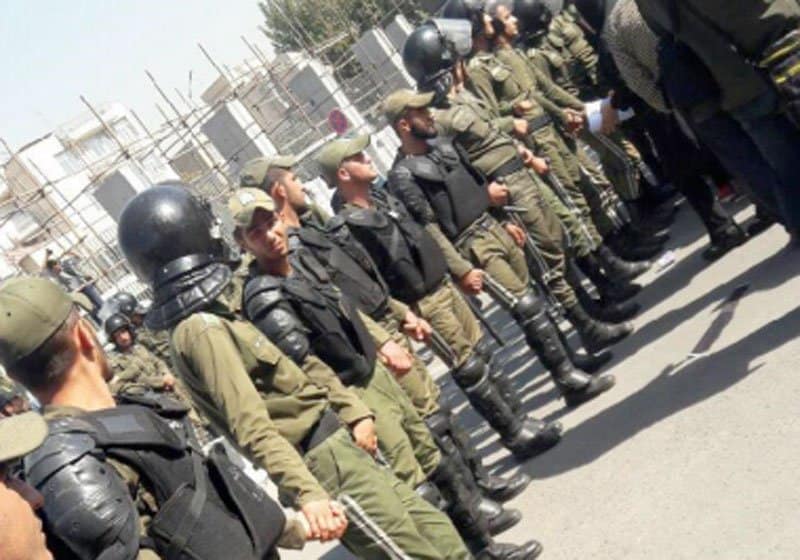 Mrs. Maryam Rajavi, the President-elect of the National Council of Resistance of Iran, hailed her courageous compatriots who staged demonstrations today in Tehran. She welcomed the protests by Iranians whose savings have been plundered by institutions affiliated with the mullahs’ Supreme Leader Ali Khamenei, and the Revolutionary Guard Corps (IRGC) with the complicity of government agencies under Rouhani and previous presidents.

She said, “The courageous chants in today’s demonstrations targeting the heads of the Judiciary and Executive Branch, as well as the suppressive State Security Force and intelligence forces, reflect the Iranian people’s desire for the overthrow of the mullahs’ religious dictatorship.”

Noting the chant “theft has become institutionalized under this regime,” Mrs. Rajavi added, “Institutionalized fraud along with institutionalized murder and belligerence constitute the pillars of the mullahs’ decadent regime. Ali Khamenei and his office hold the strings controlling all the depraved crimes taking place in the country. As long as this regime is in power, there will be no end to the astronomical embezzlement, poverty, unemployment and catastrophic economic conditions.”

Khamenei’s Wealth From Plundering the People of Iran

Khamenei has attained enormous wealth by plundering the people of Iran, devastated by poverty to the extent that they sell their children or organs, and by suppressing Iran’s youth who demand freedom. He has amassed this wealth in giant financial conglomerates such as the Staff Implementing Khomeini’s Order, the Qods Razavi Foundation, the IRGC and Bassij cooperatives, and the Mostaz’afan Foundation. He has delegated the administration of these institutes to officials who were in charge of the massacre of political prisoners in 1988, as well as other ruthless officials.

Mrs. Rajavi called on all Iranians, especially the youth, to support their plundered and deprived countrymen and women protesting in demand of their rights, and to help them expand their protests.

Iran: Uprising of Looted People in Tehran and Confrontation With Repressive Police Force-2

Iran: Uprising of Looted People in Tehran and Confrontation With Repressive Police Force