Good old Joe Biden and freshman Senator Kamala Harris (D-CA) are chomping at the bit to provide free healthcare for illegal aliens. The magnanimous proposal using your tax monies could not be more pretentious. But it brings cheers from those who either do not pay taxes or think money falls from heaven.

It is a fact that illegal aliens at present receive free health care in this country costing in the general vicinity of $18.5 billion per year. But that’s unimportant to a field of Democratic presidential nominees falling over each other to outdo the next guy by offering “free” everything. 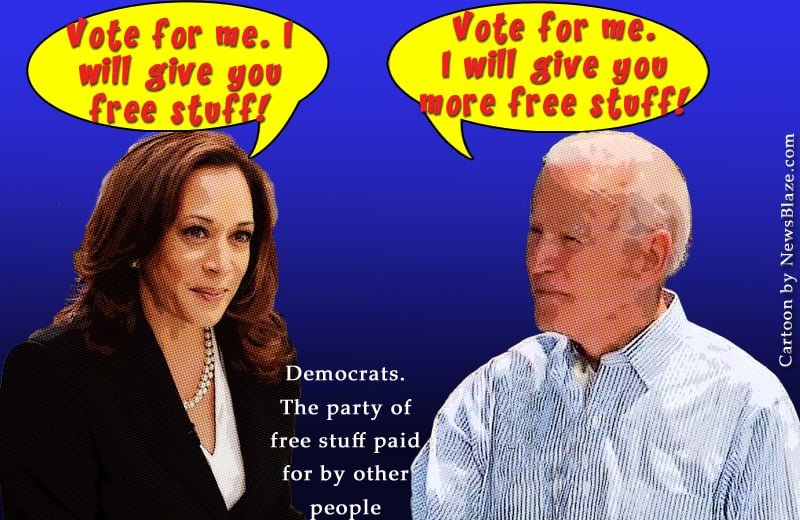 Cradle to grave welfare is the war cry from such far-left candidates as Sen. Elizabeth Warren (D-MA). Hell, she went a step further and offered taxpayer-financed free childcare of all Americans. Damn generous of her, don’t you think?

Never mind that such a proposal amounts to $15,000 per year, per infant in this country. According to the financial services firm Moody’s, the cost of Warren’s program stands at $1.7 trillion over 10 years. Pocket change, right?

But that’s not all folks. Once these budding Americans are out of diapers, the Demo candidates want to get the government to educate them. Yup, high school and college.

It’s Only Money – Yours

Not to be outdone with your money, ‘Pocahontas’ raised Bernie and would give each of the 42 million Americans currently paying off their student loans up to $50,000. That’s right, that money from heaven. Oh, Warren knows the plan is an additional $1.25 trillion over 10 years, but what the hell, idiots cheer for such things.

OK, now we have the child/adult taken care of through free childcare and college. Not so fast, they aren’t through with your money yet. Those unable to find work after free college, just because sociology or liberal arts degrees mean zero, will get ‘universal basic income.’

That’s right folks, those deadbeats will get their bank accounts replenished each month with your money. Most glad-handing Demo candidates have endorsed these entitlements through another brilliant socialist idea; ‘the Green New Deal.’

Keep this under your hat. That “deal” will cost an estimated $93 trillion over 10 years. The heavens are really erupting. Why, any two-year-old should have thought this all up. Wait a minute, they have a two-year-old’s mind, with your money.

Oh, by the way, if the replenished bank accounts aren’t working evenly over the racial spectrum, no problem, the freebie presidential candidates offer an exclusive raise to one racial group in the form of reparations for the great-great-great-great grandchildren of black slaves.

That should make sense to all of you. Or, I have to tell you, you’re a racist. Besides, Booker, Gillibrand, and Harris, as well as South Bend Mayor Pete Buttigieg, former HUD Secretary Julian Castro, former Rep. John Delaney, D-Md., former Colorado Gov. John Hickenlooper, and Rep. Tulsi Gabbard, D-Hawaii, all endorse it. So there.

Finally, and I hope this hasn’t exhausted you thus far; every Democratic presidential candidate has endorsed a national medical entitlement tending toward single-payer, socialized medicine. Yes sir, such a program will only cost an estimated $3.3 trillion dollars according to the Mercatus Center at George Mason University.

That just happens to be the same total of all federal income taxes collected in 2017. No big deal, right? Their generous spending proposals are paid for thanks to the dwindling number of American taxpayers.

You’ve got a great bunch of generous candidates out there ready to spend all your money. Now get out there and vote with a big smile on your face. Remember, heaven will provide.