Have the Democrats struck gold with liberal Senator Kamala Harris (D-CA)? Many in the party call her the second coming of Barack Obama in female form. Like Obama in his successful run for president, she has only two years in the senate and is African American. With the ‘Me too’ movement in full swing, what more could the Democrats ask for?

Harris is getting plenty of attention from networks like CNN who adore her. The fact that she has no national track record is unimportant to their gender politics.

For instance, last January 28, CNN hosted a town hall for the senator at the ripe hour of 10 pm. The time slot easily won ratings gold. That included the key demographic of adults 25-54. The broadcast netted over two million viewers, the most ever for a single candidate on CNN.

Until that day, most polls showed the leading presidential candidates as former Vice President Joe Biden, failed senate candidate Beto O’Rourke (D-TX) and Senator Bernie Sanders (I-VT). But they fail the test of far-left liberals who have hijacked the Democratic Party; they’re too white.

From that one interview on CNN, Harris has moved into third place replacing O’Rourke. She is now tied with Sen. Elizabeth Warren (D-MA). Warren is fading fast as her misuse of affirmative action becomes front page news.

Since October, Biden has ranged between 26 percent and 33 percent among Democratic voters, roughly twice the support of the next candidate, Bernie Sanders, who has been between 15 percent and 16 percent. 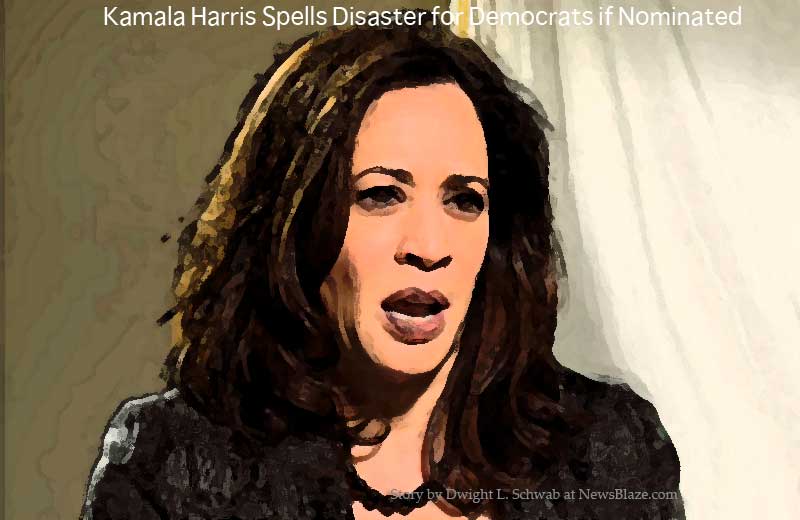 Enter Harris at ten percent. That’s up three points from earlier in January. That puts her ahead of the next two candidates: former Rep. Beto O’Rourke (D-Texas) and Sen. Elizabeth Warren (D-Mass.), both of whom are at six percent in the poll. Sen. Cory Booker (D-N.J.) is in sixth place, at three percent.

This is great news for Harris, but an impending disaster for the Democrats. Her qualifications are clouded by her over-the-top radicalism which will not resonate with most Americans.

Harris is ready and willing to do away with private health insurance altogether under Sanders’ “Medicare for All” plan, of which she’s a co-signer. Even though she backtracked from the poor reception of such a plan, the damage was done.

She embraces rookie Rep.Alexandria Ocasio-Cortez’s (D-NY) sweeping “Green New Deal.” She has spoken about ridding the country of so-called “assault weapons,” public funding for abortions and rejects the idea of notifying a parent if their minor is getting an abortion.

Harris may make a great choice for the far-left, but her chances against President Trump are marginal at best. Centrist Democrats may still vote for Harris simply for the benefit of her not being Trump, and having a D next to her name, but it will be far short of a majority to become president.

If Democrats put Harris at the top of the ticket, it will be George McGovern in 1972 all over again. Nixon won 49 states that year. Harris would be leading a radical charge with a small minority of voters behind her. That could very well lead to Schultz.

Identity politics is already beginning to sink the Democrat ship. If Kamala Harris is the nominee, Donald Trump gets four more years with ease.