President Trump took a swipe at one of his staunchest critics the other day. It is no secret there is no love lost between liberal Sen. Elizabeth Warren (D-MA) and the commander-in-chief. The incident took place at a ceremony honoring Native American veterans.

During the festivities, he called out the senator labeling her “Pocahontas,” the famous Native American of national folklore. In addressing the Navajo veterans of World War Two, Trump said, “You were here long before any of us were here. Although we have a representative in Congress who, they say, was here a long time ago. They call her Pocahontas.”

Warren is a favorite of the liberal media and their reaction was predictable. They immediately called Trump’s statement “a racial slur.” These days that is the equivalent of saying “Good morning.” The teeth of such a remark has become so commonplace with the “progressives,” it serves no purpose, including shock value.

Trump was referring to Warren’s longtime claim of Cherokee ancestry she readily used to gain minority favor for employment in America’s educational system. The idea that Trump’s usage of the word “Pocahontas” is a racial slur is more than ridiculous. 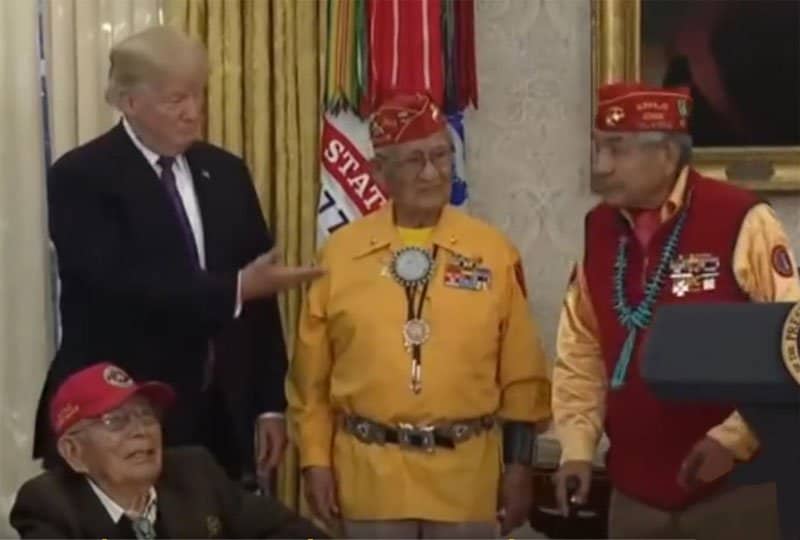 It might be a racist slur if she actually was a Native-American, but that claim is highly dubious at best. Warren has used the unlikely claim of her Cherokee ancestry to advance her academic career at Harvard to the detriment of a genuine minority applicant.

The senator denies any wrongdoing or testing the practice of minority hiring. But that could be readily affirmed if she took a simple DNA test to end the controversy. It is almost a certainty she will never do that. Trump knows this and he uses the hypocrisy of the left to illuminate her so-called “inclusiveness.”

The obsession of political correctness by the left is best handled with humor. They have no sense of humor when it comes to them. A joke can only be laughed at when it is directed elsewhere. Warren’s behavior is an injustice and the left will never recognize that she took a job away from a minority applicant it was intended to help.

If Elizabeth Warren is so outraged, she could take a DNA test to humiliate her political foe. Otherwise, the American people can only assume that her disingenuous outrage is just that; disingenuous.