Apart from India, the festival of Dusshehra is celebrated in many countries of the world. The major incidents of Lord Rama’s life are staged in the form of Ramleela. The incidents of Lord Rama leaving Ayodhya for 14 years exile, kidnap of Sita, attack on Lanka and finally killing of the devil Raavan by Lord Rama are particularly highlighted through Ramleela. On the last day of the festival i.e. Vijayadashmi, the huge effigies of Raavan, his brother Kumbhakarna and nephew Meghnad are burnt symbolising the removal of evils from the society.

It is said that Lanka King Raavan, a born Brahmin, was very intelligent and powerful. Despite these qualities, he was an egoist, stubborn, cunning and possessed a devil nature. This very nature of Raavan led him to kidnap Sita. And the same incident drove him to his killing in the hands of Lord Rama. Today his effigies are burnt as the symbols of various social evils. 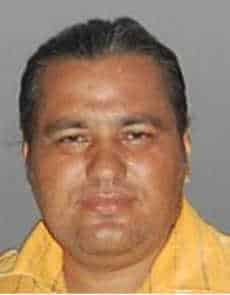 With the same spirit, this custom is followed not only in India, but also in countries with sizeable Hindu population. Important places in India where Dusshehra is celebrated on a grand scale include Mysore (Karnataka), Kullu (Himachal Pradesh), Allahabad (Uttar Pradesh), and Ramleela Ground of Delhi. Main reason for popularity of Delhi Dusshehra is- being the country’s capital, Prime Minister and big national leaders usually participate in the celebration. And the devil in the form of Raavan effigy is put to fire by them.

Another Ramleela and Dusshehra celebration is being organised at Barara town in the Ambala District of Haryana, which has grown in size in the last five years. This Raavan of Barara holds the record being the world’s tallest Raavan effigy in the past three years. Apart from this, it has many such specialties attached to it which make it world famous. The commencement of this event goes two decades back when Rana Tejinder Singh Chauhan, founder Chairman of Ramleela Club Barara and artist & designer of the tallest effigy for the first time installed a 20 feet tall Raavan. Rana claims as the evils and violence in society are growing by the day, the size of his Raavan effigy is keeping pace. In 2007, it was 151 feet tall, 171 ft in 2008, 175 ft in 2009 and 180 ft this year. In this way, this effigy is breaking its own record since last three years. 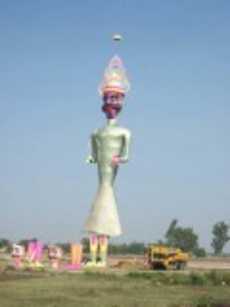 Rana told that this year’s 180 ft Raavan effigy will reflect the growing challenges of terrorism, communalism, casteism, egoism, violence, female foeticide, illiteracy, increasing population, unemployment, inflation, criminalization of politics, corruption, adulteration, hoarding, inequality etc. More than 40 tonnes of bamboo has been used in this five lakh rupees effigy. This gigantic Raavan has been decorated with silk coloured cloth. Another unique feature of this Raavan is that it has been built by a group of Muslim artisans from Agra under the direction of Rana Tejinder Singh Chauhan. It took eight months to build the effigy. During that period, the country witnessed the major Muslim festival of Ramzan and Eid. The requirements of workers during their festivities were fulfilled by chauhan himself. Therefore, this effigy also becomes a symbol of communal harmony.

People from all walks of life observe this event every year. Thousands People from all over Haryana and different parts of India come to witness this event. Hundreds of eating and toy stalls start gathering a day prior to Vijayadashmi. The atmosphere becomes that of a funfair. The installation of this effigy is no less than a project in itself. A special kind of crane is used to establish it. Every year intellectuals, politicians and businessmen are invited as guests of this event. This year’s Chief Guest was Tarsem Garg, Chairman of Maharshi Markandey University.

Referring to the 30th September Allahabad High Court verdict on 6-decades old Ram Janm Bhoomi-Babri Masjid mosque case, Rana said that it is clear from the court verdict that our judiciary strongly supports coexistence, communal harmony and unity. Similarly, this year’s Dusshehra seeks to convey that every sect of society should join together against the Raavan like evils which are weakening the society.