Made in Dagenham is based on a true story about a group of women who change the industrial world from their dilapidated, cramped factory base that leaks rivers in the rain and turns into a sweatshop in the summer. Ford management don’t do anything about their working conditions because the complainers are, after all, only women. So when the hand that once rocked the cradle dons a gauntlet and lands a perfect right hook, there is no one more surprised than them. It really is quite a party.

It’s 1968, the Ford factory in Dagenham employs 55,000 men, who build the cars, and 187 women, who sew the seat covers together. The women, already on a much lower wage than their male counterparts, are told their job status will be downgraded from semi-skilled to unskilled and their wages decreased accordingly. The women are incensed, the union steps in and the battle begins.

This film is well paced, an entertaining jaunt and places an industrial revolution in the middle of a fascinating group of people. It’s also a comment on British classism and there is no richer vein than the working class. If that sounds classist, it’s because it is, and that’s because I’m British. There’s no escape, no matter where on the spectrum you were born. 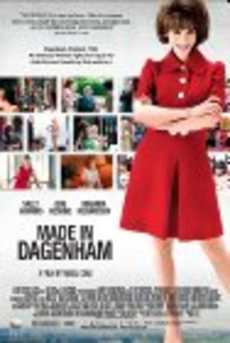 As well written as this film is, there is quite a blunder in the set up. Rita O’Grady (Sally Hawkins), is as timid as a mouse when we first meet her and has to be persuaded to take on the role of union negotiator, so when she makes a ballsy speech at her first management meeting, it feels extremely contrived. Also, Hawkins talks in either a baby voice or uses a breaking quiver, which is extremely irritating and someone with more presence would have added to the charm of this otherwise excellent indie film.

By 1968, the unions in the UK were becoming extremely powerful, with miners’ wages soaring until the mines, inevitably, began losing millions, so when Margaret Thatcher got voted in she announced plans to close them down. The miners went on strike but she had already stockpiled imported coal and, with one swish of her handbag, brought them to their knees. So would she have been equally brutal with the Ladies of Dagenham? If she had to, yes, but she was a pragmatist and all about giving people opportunities, so she’d probably have given the greedy Ford managers the opportunity to either learn to sew or pay the Dagenham seamstresses a fair wage for doing their job. So history would still have been made, but Maggie’s body count would have been a little higher.