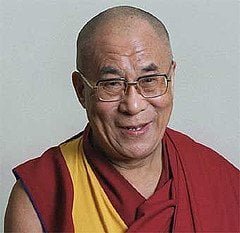 Both the Dalai Lama and King Gyanendra are believed by followers to be divine incarnations, and they (almost) share a birthday.

His Holiness the Dalai Lama is persona non grata in Nepal, due to Chinese influence, but that didn’t stop 3,000 Nepalis from celebrating his birthday Friday in Kathmandu. Little happens here that doesn’t have a political dimension, and this party for the Dalai Lama’s 72nd birthday was intended to pressure the government to allow him to visit Nepal’s millions of Buddhists, who believe that the Dalai Lama is the incarnation of Avalokitesvara, the Boddhisattva of Compassion.

Followers of Nepal’s King Gyanendra also revere him – they believe that he is an incarnation of Vishnu, the Hindu god who saves the world from destruction. The king’s birthday Saturday drew bigger crowds than the Dalai Lama’s celebration, and it also sparked fierce controversy. The palace said 16,000 people came to wish the king well: They were met by at least 10,000 anti-monarchy demonstrators. 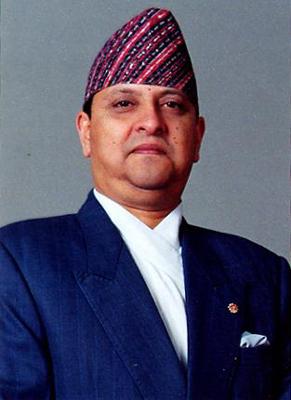 A heavy police presence and early-morning shutdown of two major roads kept the two sides apart in the immediate palace area, but there were several confrontations in other parts of the city between groups headed to the palace and demonstrators led by the Maoist Young Communist League and student groups associated with other political parties. Demonstrators also took over the open ground where supporters of the king had announced they would rally before marching to the palace. Twelve people, including two policemen, were injured, and a half-dozen people were reportedly missing at the end of the day.

The thousands of people who did reach the palace queued for hours to get in, while VIPs and ministers from past royal governments were whisked inside. The waiting crowd included many people in formal national dress, but also a surprisingly large number of people in street clothes. Those in line comprised a wide cross-section of ethnic and economic groups. While the queue looked as long as in past years, guards were able to close the palace gates behind the last well-wisher hours earlier than usual.

Even if fewer people queued to see him this year, public support for the king remains strong. A wide variety of polls from different organizations over the last year show 45-48 percent support for the monarchy. A similar number of poll respondents are strongly opposed. The even balance worries the Maoists, and drives their attempts to declare Nepal a republic now, despite their agreement last year to allow the first session of the constituent assembly to decide the question.

Maoist leaders repeated the call on Saturday, saying that royal birthday parties were “political activism” on the part of the king and were therefore grounds for the parliament to end the monarchy under the just-amended interim constitution. But other parliamentarians are not likely to be worried about the birthday parties, whether they consider them activism or not. Only 150 of the reported 2,000 people invited to Friday’s formal bash showed up, and Sunday’s tea party hosted by the widely-disliked crown prince fared no better.

Despite the political embarrassment of those flops, the poll results and the good turnout on Saturday will leave the palace hopeful that a ceremonial monarchy will emerge from the constituent assembly. That’s probably too optimistic. The show of support for the monarchy in the polls only reaches the near-half level by including a sizable number of respondents who support the institution but not the current occupant of the throne or his son.

To save the monarchy, Gyanendra may need to abdicate and take the crown prince with him. Even the prime minister has suggested that they leave Nepal. It would hurt the king, who is by all accounts a proud man, to become persona non grata in his own country. But he could at least then share the experience, and perhaps even a birthday party, with another holy exile.