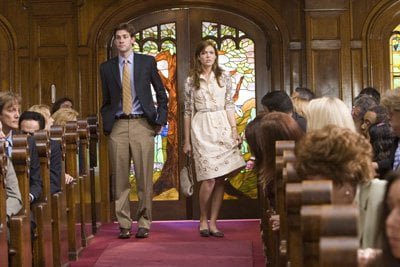 Sadie Jones (Mandy Moore) has always had her heart set on one day getting married in St. Augustine’s because the church is rumored to have been built by her grandfather. Truth be told, he only paid for a stained-glass door, but that revelation couldn’t change the young florist’s mind.

So, when her boyfriend, Ben (John Krasinski), proposes to her on bended knee at her parents’ (Peter Strauus and Roxanne Hart) 30th anniversary party, she not only accepts the engagement ring on the spot but immediately asks Father Frank (Robin Williams) to perform the ceremony at St. Augustine’s. He agrees, but informs the happy couple that the only open date available for the next couple of years is just three weeks away, which means that the bride-to-be has to cram a heck of a lot of wedding planning into the next several days. 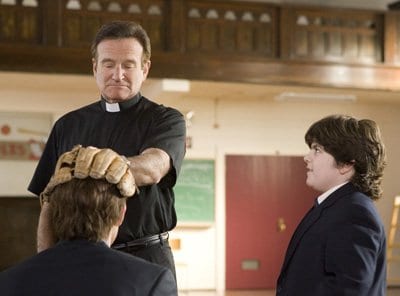 To complicate matters, his generous offer to squeeze them in comes with strings attached, namely, that they must satisfactorily complete a marriage preparation course as proof that they’re really ready to marry. And his unorthodox test involves everything from caring for a couple of robot babies which poop, pee, cry and barf to role-playing exercises in which they have to pretend to be each other.

Nights, the intermeddling minister, accompanied by his chubby child assistant (Josh Flitter), monitors the pair’s mating behavior, eavesdropping via a bug strategically hidden in their bedroom from a van parked outside their house. If this sort of voyeurism strikes you as unbecoming of a man-of-the-cloth, especially with a pre-pubescent boy sitting at his side, you’re not alone, since the creepy scenario automatically conjures up images of pedophile priests.

Unfortunately, this groan-inducing skit flops, as do all of the others in this disastrous sketch flick, a Robin Williams outing worse than Man of the Year, which made my 10 Worst List for 2006. License to Wed is only the latest in the erstwhile comic’s recent string of unwatchable offerings, which has included RV (2006), The Night Listener (2006), The Big White (2005), House of D (2005), The Final Cut (2004) and Deathy to Smoochy (2002). 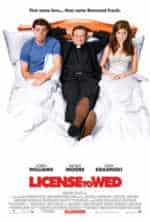 Who knows whether Williams has lost his talent entirely or has merely lowered his standards to foist as many take-the-money-and-run ripoffs on the public till his fans catch on? Regardless, this picture is so pathetic that an uncredited Wanda Sykes is funnier in a quickie cameo than the star is in 90 minutes. The same can be said for the politically-incorrect DeRay Davis in a support role as a Ben’s beleaguered buddy who brags about not getting along with his witchy wife while admitting to not knowing whether he’s the father of her kids.

Looks like Robin Williams has replaced Cuba Gooding, Jr. as the kiss of death on the set of any comedy.