Massive protest in Diphu against alleged rape by army jawans

As reported earlier, the whole of Karbi Anglong continued to be tense following the alleged rape of three women in two adjacent villages located in eastern Karbi Anglong. The rapes were perpetrated by Indian soldiers who were members of the counter-insurgency operation under unified command. 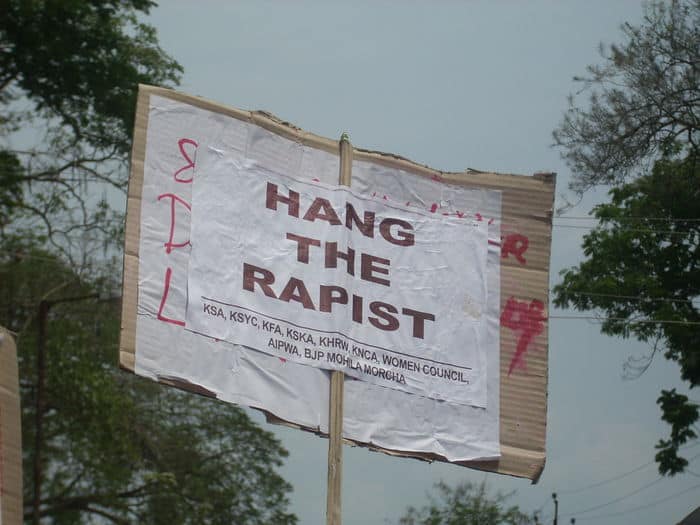 A joint memorandum demanding immediate arrest of the culprits, and adequate compensation to the victims was submitted to the Deputy Commissioner Mukul Gogoi.

Today, Mrs. Hunmili Teronpi, Additional Deputy Commissioner conducted a probe into the incident. DC Mukul Gogoi, Superintendent of police Karbi Anglong MJD Mahanta and high level army officers also visited the place of the incident. As of now both the SP and army authority issued an assuring statement that erring army personnel will be arrested once the identification process is done.

It may be mentioned here that a 50 year old lady and her 38 year old daughter in law and her 15 year daughter were raped by the raiding army in Sarthe Tokbi village under Dokmoka police station around 7.00 A M on the pretext of searching for insurgent elements. During the incident, a 3 year-old infant was also hit with a rifle butt. The incident was reported to Dokmoka police station yesterday and two separate cases were registered. The victims were sent to Diphu civil hospital for medical examination. Receiving official information, Deputy Commissioner of Karbi Anglong district, Mukul Gogoi immediately ordered a magisterial investigation into the incident.

Sarthe Tokbi village is around 35 kilometers from the police station, connected through a jungle trail. Villagers told the media that due to hostile terrain and remoteness of the place of incident from Dokmoka town, it took more than 24 hours to report the incident. The district police authority considering cognizance of the matter assigned one lady DSP to investigate the incident yesterday.

Various civil society members called for a 24 hour deadline for initiating government action and threatened to impose a general strike for an indefinite period if the government fails to reach a logical ending.

Meanwhile, Pratima Enghipi general secretary of Karbi Nimso Chingthur Asong (KNCA) has alleged that around 11 to 12 army personnel of Jat regiment entered the residence of Dar Tosso in Sarthe Tokbi village and molested his 15 year old girl. When her mother tried to free her from the clutch of the perpetrators she too became a victim.