The National Democratic Front of Boroland (Progressive), NDFB(P), the pro-talk faction of an Assamese militant group, engaged in a peace process for the past six years, says it welcomes the Assam State Government initiative to allow Indian Army security forces a ‘free hand’ to seize illegal arms in the Western Part of Assam.

The security forces have already started their operation in the area, where ethnic conflicts recently flared up. The organization says the peoples of the state would much feel happier, be more relaxd and secure if the Assam Chief Minister authorised the Army to detect and deport the ‘illegal Bangladeshi immigrants’ in addition to seizing the illegal arms.

“[W]e also welcome the state and the Boroland Territorial Autonomous District Council (BTADC) governments to their decision for immediate rehabilitation of the evacuated people by the ethnic-clash. But, our only plea to both the IASG and Indian Central Government – excluding the bona-fide Indian citizens, no foreigner or ‘doubtful voter’ (which is known as – ‘D’ Voter) should be included into the lists of rehabilitation and the question of citizenship must be proved and fixed on the basis of the ‘Census Report of 1951, which is constitutionally justified as per the Indian Citizenship Act, 1948,” – a press note given to media by S. Sanjarang, the Information & Publicity Secretary of NDFB (P).

The militant organization described in their press release on 30th August, 2012 and said, “The fact is that illegal arms are available in every nook and corner of the state and not only in lower part of Assam State but also in entire state. Therefore, we, the NDFB (P) feel that the drive for seizure of illegal arms should be operative in the entire state, if the IASG really has sincerity in prevailing peace in the state.

The NDFB (P) has been complaining about illegal arms in the area for a long time, but the State Government did nothing about it before. This laxity on the part of the government has allowed the crisis of kidnapping, killing and ethnic riots.

The press release says “during our official as well as informal interactions with the officials of the IASG since the beginning of our peace process, we time and again expressed our apprehension for probability of unwarranted situations due to availability of illegal arms in the region and appealed them to take bold steps to seize those arms but for the reasons best known only to them the authorities did nothing and as a consequence each and every part of Assam State is today seen to be in boil with kidnapping, killing and ethnic-riots, et cetera. The present ethnic violence is none but the outcome of laxity of IASG authorities in this regard.”

The organization also criticised one of India’s leading English national dailies reporting, published on 29th August, 2012 mentioning it specifically in their press release, “It is absolutely concocted, fabricated and completely false reporting. We were surprised, when we saw the news, where the report allegedly accused us that our organisation is directly having taking part in the recent communal-riots between the Boro Tribe and the illegal Bengali speaking Bangladeshi minority Mulsim immigrants in Kokrajhar, Chirang and Dhubri districts of the Assam State.”

The NDFB (P) press release went on to say “[T]he [news] report also claimed that we are violating the ‘ground rules of cease fire’ by not submitting the arms to the IASG and keeping some of our arms with the civilians, which are not only baseless but also unsubstantiated and sham allegations. The NDFB (Progressive) is working in close cooperation with the people of other communities as well as the IASG’s law maintaining agencies for building up of a permanent peace in the region. We are not involved in the recent ethnic-violence that broke out in the three districts of the state that has been alleged. Besides, through our various ways, including media by our press notes, we condemned the violence and from its very beginning, kept appealing the parties/people concerned to be tolerant to each other for keeping restraint expressing futility of being engaged in the acts of human tragedies. We condemn the unfounded allegation and also the reporter’s desperate attempt to malign us with false, baseless and fabricated news.”

“We have deep respect for the media and its people, be it print or electronic, for their selfless services to the people and the society. Being the fourth pillar of the democracy unbiased and untainted service of the media is inevitable for peace, harmony and development of our nation. We therefore appeal to the media persons not to create confusion and misunderstanding among the people by publishing false and baseless news.

The NDFB (P) says they are working for peace and mutual understanding among the people of different communities living together in the area. The organization’s Information & Publicity Secretary of NDFB (P) noted in the press letter: “Therefore we would like to appeal the people of all the circles and all the communities not to be misled by such baseless and motivated publicity and further would like to appeal to keep strict vigilance to the evil forces to keep the social fabric in a smooth run.” 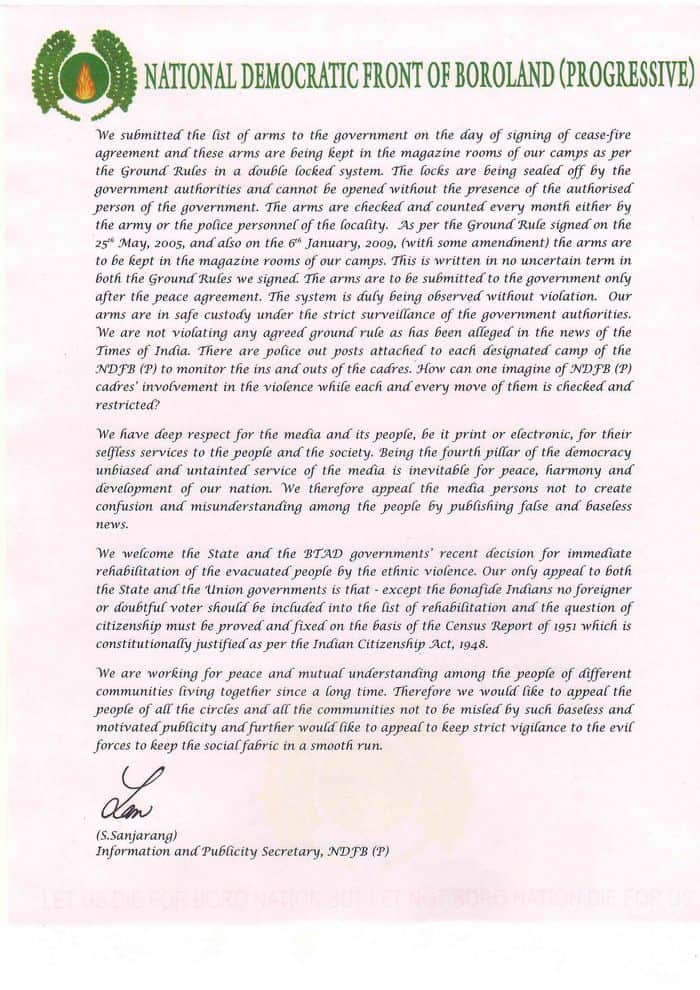 When the group signed their cease-fire agreement with the government, they listed all their arms, and those weapons are now kept in a double locked system.

“Meanwhile, we already submitted the list of arms to the IASG on the day of signing of cease-fire agreement and these arms are being kept in the magazine rooms of our camps as per the Ground Rules in a double locked system. The locks are being sealed off by the IASG authorities and cannot be opened without the presence of the authorised person of the government. The arms are checked and counted every month either by the Indian Army or the personnel of the Indian Assam State Police Force (IASPF) and the locality as well.”

As per the Ground Rule signed on the 25th May, 2005, and also on the 6th January, 2009, (with some amendment) the arms are to be kept in the magazine rooms of the camps. “This is written in no uncertain term in both the Ground Rules we signed. The arms are to be submitted to the government only after the peace agreement. The system is duly being observed without violation. Our arms are in safe custody under the strict surveillance of the IASG authorities. We are not violating any agreed ground rule as has been alleged in the news of the said newspaper.”

The press message notes that there are IASPF Out Posts attached to each of the NDFB (P) designated camps, to monitor the movements of their cadres in and out. Given this, they ask “How can one imagine NDFB (P) cadres’ involvement in the violence, while each and every move of them is checked and restricted?”

5. Memorandum Calls for End of Communal Clashes in Assam

6. Unabated Illegal Bangladeshi Threats to The Ethnic Identity of Boroland

7. All Disquiet in North-East India

9. Millions of Foreigners in India,

11. An Ugly Attack on Human Rights

14. Secret Dossier of Land Dispute Between India and Bangladesh