Hardly one week had passed, when the terrorists made serial bomb blasts in Delhi, the Capital of India Delhi again became the headlines on September 19. When Delhi Police and National Security Guards (NSG) raided a hideout of the terrorists in the Okhla area of Delhi and killed two terrorists. A brave inspector of Delhi police, Mohan Chandra Sharma laid his life in this encounter.

In this densely populated area, during the action at the morning, a suspect named Saif was arrested whereas two terrorists escaped. In this combat on Friday morning, in the densely populated Muslim area, there were some persons who were trying to call it a fake combat to insult the Muslim community. Whereas there were a large number of the Muslims and the others who were the eyewitness of the event of the firing from the both side, the police and the terrorists. And the martyrdom of inspector Sharma is a hard proof that the terrorists constantly fired at the security persons and in return the police had to open the fire. As the terrorism, especially the terrorism based on religion and community is taking the country in its grip.

There is great need to check the activities and those who give shelter to the terrorists should be immediately curbed. The statement of the father of Saif, the suspect caught in Delhi combat should be a lesson for the Muslims in India. He says, ‘If my son is a terrorist, shoot him in front of me’. The Muslims of India should also learn a lesson from the mother of another alleged terrorist Zubeida. She said that if her son was involved in the terrorist activities, he should be hanged.

Despite one thing that came out causes great worry. The Indians were proud of the fact that the persons involved in these terrorist activities were not Indians. But misfortunately the name Indian Mujahideen, the terrorist organisation that is in the headlines today belongs to the Indian soil. It simply means that some misguided fundamentalist Indians have been impressed and started work with an organisation that has been striking at the very cause of communal harmony in India.

Undoubtedly, the Indian Muslims especially the Muslim literates are worried about the issue that because of some inhuman activities of some misguided Muslim youths, the Islam has to face a great insult. To publicise their worry, last days sometime in Delhi and sometime in Deoband, the Muslim priests, Ulema’s and imams tried to show the world in great gatherings of the Muslims scholars and the Muslim public, that Islam is not associated with terrorism. The Muslim scholars clarified the point that the Islam doesn’t teach terrorism. It doesn’t inspire for terrorism.

It is anti-Islamic to kill innocent and unarmed people. It is totally anti-Islamic to kill the women, the children and the old people. A person who is involved in such activities is unreligious and can’t be called a Muslim. But the reason is beyond one’s knowledge that in spite of these declarations of the Muslim scholars, the terrorism is spreading in India? The world ‘crusade’ (*Jihad*) that was heard from across the border or sometimes in Kashmir has made a base in India under the name Indian Mujahideen. Because of these misguided Muslim youths, the communal harmony of the country is being spoiled and the persons who are anti-Islamic get the chance to raise the fingers. 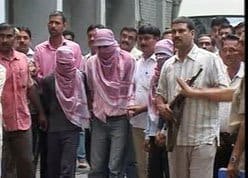 Now it is a proper time to see the challenges that the Indian Muslims have to face and what should be done to lessen the terrorist activities so that anti-Islam persons shouldn’t get chance to affront the Islam. Obviously it is not time to waste the time in discussing, all this why and how it happened and why it is happening? In my opinion, already we have made the Muslims and the Islam to stand on such a point only because of these discussions. Now the need is to find the immediate solution of these problems. For these solutions, it is necessary that Indian Muslims should feel themselves unassimilated and unlinked from the Arabian Muslims. They should try to understand the difference between the Indian Muslims and the Arab Muslims.

The second attempt should be from the side of Indian Muslims that they shouldn’t associate the Talibani teachings and the Talibani movements with the Islamic teachings and the Islamic movements. The Muslims should make an attempt, as Friday is the day of collective prayer, as most of the Muslims gather for prayer in mosques on this day. So on every Friday the persons who make the prayer the Imams should address to the persons who pray that the terrorism is inhuman and anti-Islamic and the Muslims are against terrorism and to kill the innocent persons is a way to hell.

There is no place of extreme religion in India and there is no need of it at present. The Imams should teach the Indian Muslims to live with cooperation and love with other communities in India. They should teach that it is good to take part in the religious activities of the other communities. The addresses to be given in the mosques should have the lessons of not spreading hatred but to have social cooperation and shouldn’t think one self above others.

The need is that the Islamic religious leaders should teach in the mosques to the Muslims about nationalism, communal harmony and equality for all religions. If some conservative and misguided Muslims take inspiration form the rulers like Gaznavi or Tughlaq, in reality they are affronting the Muslims and the Islam. For a true national Muslims, how can a looter or a plunderer or assailant or an assaulter be a source of inspiration?

A true Indian Muslim should get inspiration form the brave Abdul Hamid, who was awarded the Paramveer Chakra. If a Muslim of today will be guided by Ashfaquallah, he is the right person to be called a true Muslim. There is a need to accept Bharat Ratna APJ Abdul Kalam, Dr. Zakir Husain, Abul Kalam Azad, Rafi Ahmed Qidwai and Azeem Premji, the persons who have the national thoughts as the ideal. If the religious leaders talk of these national guides publicly among the Muslim brothers and the Muslim youth are told to take inspiration from these persons and to walk on the footsteps of these personalities, there is no doubt that the Muslim youths will be filled with national thoughts in future. In the present time, there is an important role for them to wash away the blots that are there because of the Muslim youth’s involvement in the terrorist activities.