Scary Movie scream queen vet Anna Faris decided, as she explains in her own strange way during this gab session, that she was ready for a big switch makeover in movies. So she signed on as both producer and star of The House Bunny, in a bid to express her inner funny bunny. And which also landed her on the cover of the recent Playboy. But Anna hasn’t given up her mama drama side just yet, as she plays Shelley Darlingson, a Bunny who ends up in a sorority house after getting tossed out of the Playboy Mansion for being over the hill at twenty-seven years old. Which, for those not in the know, happens to be fifty-nine in bunny years.

So how come that aging codger Hugh Hefner is the only one allowed to grow old and still be up to his apparently desirable neck in all those Bunnies? In any case, there were some fascinating revelations during this giggly conversation, even though Anna seemed to suspiciously drop by in character as your basic dumb blonde. For instance, that she’d rather bond with a Bunny any day, over that feline species she encounters among those catty fellow actresses. Anna also shared her very personal Philosophy Of Sexy, and how it can be really embarrassing when you’re doing a nude scene in the movie, and getting caught wearing nothing more than her hat as a producer. 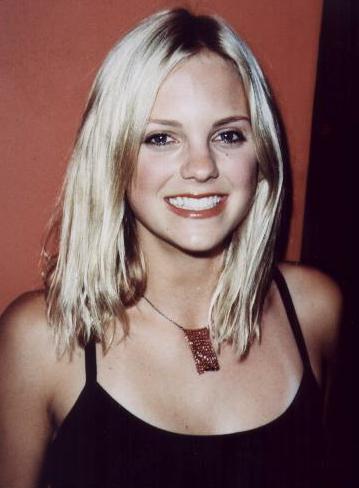 So what do the real Playboy Bunnies think about how you played one of them in this movie?

ANNA FARIS: Well, um…We screened the movie for ‘Hef.’ And the Bunnies too. And they seemed to really love it. Though I don’t think any of them are going to tell me, ugh, [Anna whispers] hated it!

AF: I was expecting the mansion to be a highly competitive environment between the women. But from my observance, I didn’t see that at all. Everybody was so friendly and nice. Much more so than actresses can be with each other. Which was interesting! And, you know, really refreshing. I have a whole new respect for a lot of those girls.

What was it like working with ‘Hef’ and getting him to show up for this movie?

AF: Ha! He was a great sport. And that scene where he’s eating all that ice cream because he’s sad that I went away, we were all in his bedroom. And it was like 110 degrees. And he had to eat, you know, a lot of ice cream!

But Hef was always great about it. He was always in a good mood. But I think he’s hysterical in the movie. Because it’s so clear that he can’t be anybody but himself! So it was awesome.

What was it like for you, running around half naked a lot of the time in House Bunny?

AF: Yeah…I think that Shelley’s sexiness – to me at least – was innocent. And silly. I mean, it’s not any kind of sophisticated sexiness. At least to me. Maybe other people see it differently.

But I wanted to create a character that, while she wore really skimpy clothes, it didn’t seem like she was sleeping with half the town. Or that she even knew how to be savvy, in a truly sexual way.

And that’s why she was never able to get the centerfold. But that was something I struggled with as well.

AF: A little bit. I don’t know, if you add too much sexuality, it can take away from the comedy. I hope I’m making sense.! I don’t know if I am.

Is this the first time you’ve done a nude scene in a movie?

AF: Yes! I was supposed to have a body double, but there were some complicating factors.

So how did you end up doing the nude stuff?

AF: It was a last minute thing where I went, oh okay, I’ll do this. But I was really…uncomfortable!

AF: Well, the crew knew me so well by then, like wearing a hat as producer. And they suddenly see me naked! So that was a little humiliating.

But your nudity was pretty discreet.

How about that myth of the dumb blonde? Do you think it’s just a myth?

AF: Shelley is clearly not the most intelligent girl. But one of the things that comedy has given me, is a really good ability to laugh at myself. So I feel like very little offends me anymore. And I’m really grateful for that. Because I think I was a pretty uptight little kid! So I’m happy to feel like I can really laugh at myself.

What do you feel you bring to comedy that’s new and different, and maybe even sexier?

AF: I feel there’s such a boys club in Hollywood, like Ben Stiller, Adam Sandler and Will Ferrell. And I would really like to be a part of that as well. I do feel a little tired, like I’m just waiting around.

And all I seem to get cast for, are the straight girl roles. And those aren’t nearly as much fun to play. So I feel very fortunate with this one, though I wasn’t necessarily very powerful in the whole process. But it makes me feel like, well if I did it once, maybe I can do it again.

Is it true that you went and pitched the idea for this movie, dressed up in character?

AF: Yeah! Sometimes it really didn’t go so well! But sometimes it did.

It sure seems like Marilyn Monroe was the inspiration for your bubbly character Shelley in House Bunny.

AF: Marilyn Monroe is definitely somebody I admire. And I have, since I was a little girl. But I initially had a different idea. I was thinking, like what happens to the Playboy Bunnies when it’s time to move on.

AF: Well, you have sort of this protective, contained life. Though I don’t know how protective it is. Whatever! But this contained lifestyle, where you’re at parties all the time, and that’s your job. And, you know, whatever.

But I wanted to have Shelley go on a really dark journey. Like where she’s a drug addict, and moves back to her small Christian town. But it turns out that’s not as commercial as her sorority house mother story!

But no, I’m really happy with what we came up with. And I actually pitched the story to the Legally Blonde writers, and then they figured out the rest of the plot points. Because they weren’t buying the drug addict story!

A drug addict – is that supposed to be a comedy?

AF: In my twisted mind, yeah! And there was some other stuff that was just too weird to make it into the movie, but fun to do.

What was it like working with those actresses playing the sorority sisters?

AF: I was really proud of them. Because they had no problem losing their sense of vanity, and wearing hardly any makeup and stuff. That’s pretty brave!

Do you consider yourself to be hi-tech or lo-tech?

AF: Lo-tech. And embarrassingly so. Because I just told somebody that I thought LOL means Lots Of Love. And I couldn’t figure out why everybody was giving me so much love!

Good you straightened that out. Are you doing any more Entourage?

AF: No, no more Entourage. It’s hard to play yourself.

I bet! What’s next for you?

AF: I’m in a movie with Seth Rogen, called Observe And Report.

Are you both naked in that?

AF: Um…Almost! We have a love scene in the movie. But there’s not a lot of love involved, I can tell you that!

Have you ever thought about Shelley down the line as a senior bunny, like in her eighties?

AF: No. But I imagine her to be just as funny, and good hearted. And maybe she’s still single!

Will there be a House Bunny sequel?

AF: Oh, I would love to play Shelley again. Maybe that’s when she becomes a drug addict!

Who designed that Playboyish shimmering satin pink mini-dress of yours that you’re wearing today?