Jordanian warplanes carried out a bombing raid against the Islamic State group in Syria on Wednesday as part of a second day of US-led air strikes against ISIS.

King Abdullah II of Jordan told CBS 60 minutes 23rd September 2014, the war against ISIS is a fight of good against evil.

“Bahrain Jordan, Qatar, Saudi Arabia and the United Arab Emirates took part in air strikes against ISIS in Syria, American officials announced on Tuesday. The new coalition’s makeup is significant because the United States was able to recruit Sunni governments to take action against the Sunni militants of the Islamic State,” according to the New York Times Tuesday 23rd September 2014

ISIS military victories in Iraq and Syria in June emboldened the group and its followers throughout the Middle East. ISIS leader Abu Baker al-Baghdadi recently discussed with his lieutenants the possibility of extending the group’s control beyond Syria and Iraq, taking jihad to the Gaza Strip, Sinai and Lebanon; and to Jordan, where Islamist movements already have a significant presence. Jordan also shares borders with Iraq and Syria, making it easier for the terrorists to infiltrate the kingdom.

Jordanian leaders at the highest levels are alarmed. Jordanian political analysts are taking the ISIS threat very seriously. According to Middle Eastern security officials, defences have been reinforced at the borders of Iraq. The Jordanian air force has been on high alert for several days.

ISIS poses a threat to and beyond the Middle East, to American and European interests. The beheading of two American journalists and a British aid worker has given an international dimension to the crisis. As events in Syria demonstrate, terrorists don’t respect national borders. Analysts and statesmen alike have said repeatedly that any coalition to fight ISIS must include Arab States. This point was made again on September 16th, at a hearing of the US Senate Armed Services Committee. 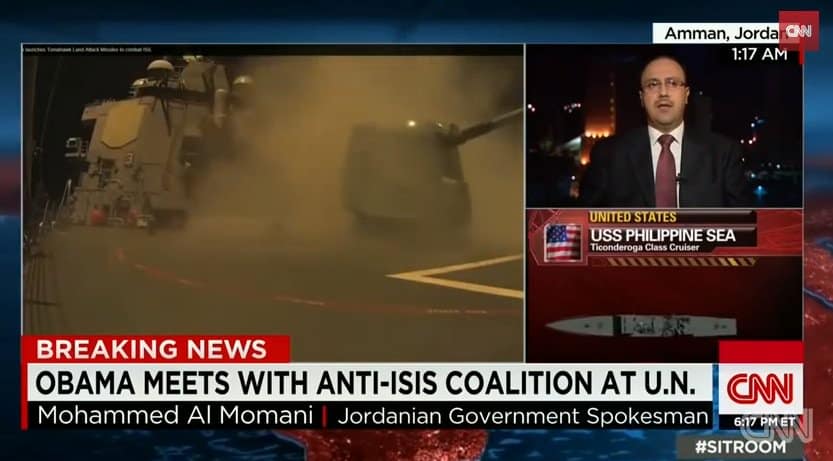 Some 10 Arab States have committed to take part in the fight against ISIS. UAE members, Saudi Arabia and Jordan have agreed to participate. US Secretary of Defence Chuck Hagel claims that Saudi Arabia has committed to training 5000 Syrian rebels, as well as offering logistical and other facilities. Jordan’s King Abdullah’s participation in the NATO summit in September 4-5 in Newport, Wales was a clear indication that Jordan is a part of the strategy of confronting ISIS.

The summit considered the role that NATO can play in an effective collective response to ISIS, and the roles of the regional states. King Abdullah’s participation is significant. Jordan has been a strategic partner to NATO since 1994, and the Kingdom’s stability and security must be a top priority to all 28 members of the alliance. For decades, Jordan has played an important role in assisting NATO’s military and humanitarian operations in theatres such as Afghanistan and Libya. Jordan’s co-operation helped U.S. intelligence to find and eliminate Abu Musab al-Zarqawi, former leader of al Qaeda in Iraq.

Peter Millett, British Ambassador to Jordan, said earlier this month: “NATO has constantly been adapting and changing, and the alliance now needs to adapt to the danger we are all facing from extremists and terrorists in Syria and Iraq.”

“Jordan has infiltrated [ISIS] in the past,” said Marwan Muasher, Jordan’s foreign minister 2002-2004 and deputy prime minister until 2005. Muasher told CNN recently that Jordan can contribute to the Western effort, not necessarily by providing ground forces, but by offering logistical and intelligence assistance. Muasher also warned that no deals should be struck with Assad.

On 10th September, U.S. Secretary of State John Kerry met with Jordan’s King Abdullah in Amman to discuss the formation of a broad U.S.-Arab coalition, including the possibility of using Jordan as a base for strikes against ISIS in neighbouring Iraq and Syria. (Kerry and the monarch also discussed the humanitarian impact of the regional crisis on Jordan. With the exception of Israel, Jordan’s intelligence service is widely seen as the most competent and the closest to U.S. intelligence organisations in the region. Many of its senior staff members were trained by the CIA. A former U.S. intelligence official said its General Intelligence Directorate has been an especially close partner with the CIA since the 9/11 terrorist attacks:“From an intelligence-collection perspective, Jordan has the geographic advantage, owing to its central location and borders with Iraq and Syria. A big part of what they’ll do for the U.S. will be intelligence collection” – including running networks of spies and recruiting informants in Iraq and Syria, to help root out ISIS members and understand the group’s hierarchy and organisational structure.

Jordanian intelligence also has infiltrated the Iraqi Sunni tribes aligned with ISIS. During the Iraq war, the US managed to turn those tribes against al Qaeda in Iraq and got them to fight with the Americans. That was a key pillar in the strategy that ultimately helped defeat the terrorist group, albeit temporarily.

As many as 700 Jordanians are estimated to be fighting with ISIS, and thousands of others with al-Nusra Front, al Qaeda’s Syrian affiliate. It is clear that the Jordanians, as well as the Saudis and other governments in the region, must act to protect their own national interest.

Now, with the United States building a coalition of some 40 countries, Nasser Judeh, Jordan’s Foreign Minister recently called for cementing cooperation and coordination to help Iraq in addressing terrorism in the region; “the international community should target all infrastructural assets of the IS group found anywhere.”

However most Middle East analysts believe that in the long run, moderate Syrian rebel groups such as the Free Syrian Army must do the fighting on the ground against ISIS. The FSA is the only group battling ISIS. Arming the FSA is the long term answer.