Three soldiers? Three is a crowd!

I’m back at home and in time to catch Doctor who and my brother yells that there are 4 minutes left before the show starts. I really wanted to catch this episode and I did. Another thing I really wanted to happen was for Danny Pink, Clara’s boyfriend, to meet The Doctor (who in a weird way is her ex-boyfriend … sort of). The perfect thing about the episode is that all of the interaction and scenes are happening in and around Coal Hill School, no planets and distracting aliens and landscapes, this gives the drama a little more focus than perhaps in episodes that happened off-world. This is debatable of course but the episode benefited from having more grating interaction between characters doing day to day things in comparison to surreal time traveler shenanigans.

Danny and the Doctor (both soldiers) don’t play nice at all as verbal sparring takes place with Clara caught in the middle. The monster (Skovox Blitzer), a dangerous soldier, is more side show than main attraction. The real action is watching a 2000 year old alien pretend to be a caretaker in what is a very unconvincing disguise. The highest point of action arrives however when the doctor and Danny Pink meet; It’s unpretentious, verbally heated and on the edge of your seat intense. I felt the dislike come off the Doctor like a heat haze. 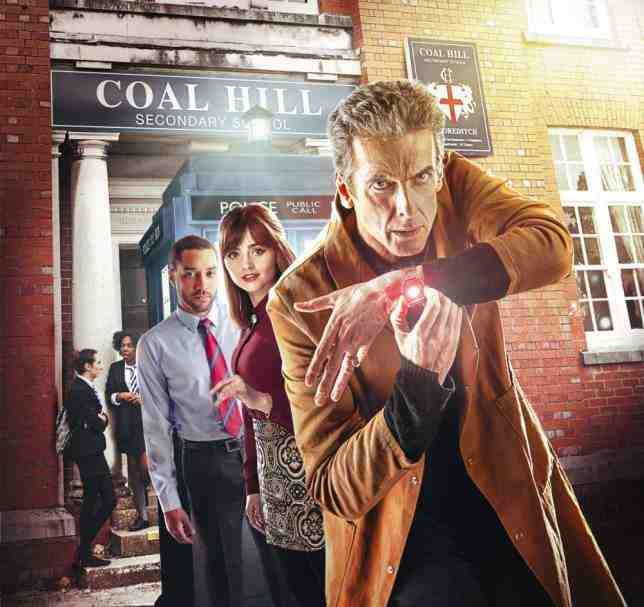 Apart from the Doctor – Danny fire breathing contest, the rest of the episode offered several treats; the Doctor gets another companion-that troublesome girl that Clara dreads teaching. She has natural chemistry with the doctor. The special effects team does a brilliant job with some scenes of space, Danny Pink’s somersault, and Heaven. Speaking of which-Heaven and the Promise Land get some air time as a copper dies and asks where he is. The alien soldier (Skovox Blitzer) is impressive as a metaphor and as a live action prop. The overall direction of the episode and everything about it including audio was top notch. I’ve said it before an d I’ll say it again this series will be the one people re-watch for its quality of production.

In this episode, the Doctor’s dislike for soldiers is on full display once the ‘Danny Pink Penny’ drops. He feels no way about upsetting Clara, telling her that’ she’s made a mistake in picking Danny as her partner. Danny assumed The Doctor was her father and it’s hard to disagree with him despite knowing better. The Doctor’s paternal instinct kicks in throughout this episode and reaches a crescendo at the end. The Doctor isn’t annoyed that Clara didn’t pick the teacher as her partner; you know…the one with the bow tie and fringe. It’s more the fact that she chose an ‘ex-soldier’ and something inside the Doctor can’t seem to reconcile ‘ex’ with ‘soldier.’ Perhaps he believes the mantra ‘once a soldier always a soldier’ rings true? He practically guffaws at the idea of Danny being a mathematics teacher rather than a P.E teacher. The Doctor’s disbelief not only insults a very cool headed Danny but leaves Clara wounded as she openly declares her love for Danny Pink. What follows is a disapproving dad stare accompanied by incredible eyebrows.

At the climax of the episode Clara says Danny has to be in the Doctor’s good books having helped save the world but the Doctor’s reply gives a clear idea of what the next couple of episodes will look like; his reply was “It’s a start.” He’s right of course , it’s the middle of the series but from here on out it’s a new dynamic to the TARDIS’ company. This episode was all about soldiers-The Doctor, Danny and Skovox Blitzer. They all reacted to each other with violence – verbal and non-verbal. I perceive there is still more verbal violence to be had between Danny and the Doctor with Clara stuck in the middle. Well, you know what they say about three; three is a crowd. Bring on episode 7!

Have a peak of the episode: