Ola Olu; the largest outdoor temple for the African Traditional Religion (ATR) of Ifa in North America, and monumental spiritual headquarters of The Ifa Foundation International, will be hosting a life-changing public event, with a very special line-up of rare healing ceremonies and transformative workshops open to the public next month. An event like none other, never before held or experienced in the United States, the invitational link to NewsBlaze readers, as well as further information, is detailed here below as follows.

“Ours is a process of awakening the individual. You may participate on any level, from visitor to initiate.” – Ifa Priest Oluwo Fagbamila; Ifa Foundation International

Lifting the Veil of Secrecy

As reported last week on ABC News, “Unlike most traditional or contemporary ATR temples, where many practices and wisdom’s are shrouded in patriarchy and mystery, Ola Olu treats persons of all gender, gender orientation, race, and creed–with respect and service; educating all of good character into the ancient wisdom’s of the spiritual path.”

As announced in the official press release, “Begin with the opening rituals April 27, and stay as many days as your heart desires through May 5. You will “expand,” as you immerse in the inter-dimensions of The Sacred Ancestral Forest with The Masters of Ifa. You will “activate” every cell of your being. Get ready to empower your life at this once in a lifetime event. Engage in the Ase of Elder Oluwo Philip Neimark celebrating 50 years of Ifa-ing. Learn from 15 Master Priests of Ifa; each sharing unique wisdom. Participate; Learn; Grow.

Ultimately celebrating world-renowned Ifa Priest Oluwo Fagbamila’s (Phillip Neimark’s) 50th Year in Ifa, numerous Ifa and Orisa Priests and Priestesses from the around the world will converge at the Sacred Gardens of the Ifa Foundation International in central Florida; for celebration, teaching workshops, presentations, ancestral lineage coaching, spiritual refreshment, ceremony, and more from April 26 to May 6, 2019. The Ifa Program Guide to the Festival can be found in the link below, including maps, speaker line-up, directions, affordable pricing, and more.”

History of The Ifa Foundation and The Sacred Gardens

The Ifa Foundation states, “Carried to the Americas by slaves; the 8,000-year-old philosophy of Ifa originated with the Yoruba peoples of West Africa. Ifa’s enduring message of strength and inner peace is expanded by the extraordinary, life-long dedication of founders Oluwo Fagbamila (Philip) and world-renowned Iyanifa Olufadeke (Vassa); co-founders of the stunning Ola Olu and the Ifa Foundation International.

In earlier times, an ancient continent known as Pangea began to split apart. Florida remained behind with the rest of North America. Reportedly over 300 million years ago, this land eventually became other continents including Africa, and left behind its’ sacred soil, plants, and roots. Humanity, which first appeared in Africa, shares the same soils, plants and roots of our shared descendants inside the “Sacred Gardens.” The Native Americans later shared this land, fishing the lakes and growing food there. Many African slaves, fortunate enough to escape–found safety in this land, and married the Native Americans where they became known as “Maroons.”

On this fertile land, they performed their rituals for each season, prayed daily to the four-directions, performed birthing ceremonies, and held their tribal meetings and teachings. They honored the land with special rituals before all they did, playing their instruments and drumming, and living in harmony and peace with one another. This land; now “The Sacred Gardens” was not tarnished by man. Instead, it was purchased by The Ifa Foundation International, and left untouched; honored and respected, as those who had always lived there reverently treated the land.” 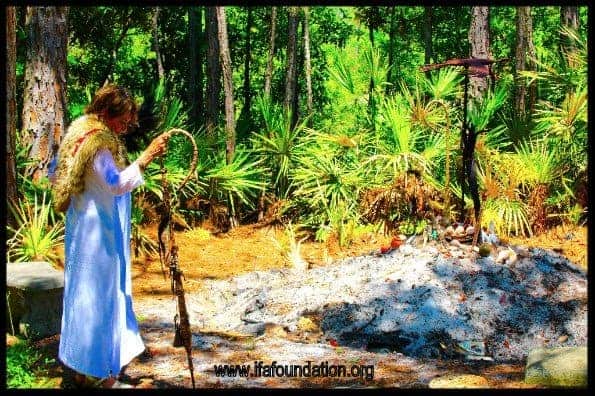 Welcoming Women and the GLBT Community

Practicing the traditional African Religion of Ifa in the United States in Central Florida, The Ifa Foundation is also unique, in that it has famously broken barriers in the religion, by being the first temple to embrace women and the GLBT community for priesthood positions. The Ifa Foundation International is also unique in that instead of hiding histories, traditions, and rituals from members; it is welcoming, open, and educational to all. The Temple even gives away free general energy readings each week; online to the public found through the link below, and offers a free online classroom.

As noted by the Ifa Foundation International, practice of the religion is predominantly comprised of three main components;

1. Ritual Energy; Engaging in historical ceremony, ritual, and offering to the traditional African deities, and ultimately the creator of all things; sharing this similarity with many other mainstream religions

2. Divination; Using traditional methods to tap into the unconscious mind of the practitioner to find the energies most affecting them, as well as to determine the quantum energies existent in all life and all matter that are presently affecting the person, and

3. Ancestral Connection; Recognizing a permanent spirit of every human being, and communicating with those blood ancestors who have passed on (again, common in many other religions), as a means of gaining wisdom and help from them in this lifetime.

The Ifa Foundation invites you to explore their information online, join them during their very rare, public, transformative celebration, and get in contact below: