Witches Put a Spell on Trump, and Trump Supporters Fight Back. This and more of the latest news in entertainment and Washington is reported here from Bruce Edwin of Starpower Management and Hollywood Sentinel dot com for Breaking News Daily here exclusively for NewsBlaze dot com.

Numerous online groups of so called ‘witches’ reportedly are planning to curse President Trump at the stroke of midnight tonight with a so-called binding ritual. What time zone the curse is supposed to be during, we have not read as of press time. Some reports of the alleged requests to be carried out by witches and non witches alike circulating around the internet include burning an orange candle, using a Trump card, burning images of the President, reciting the 23rd Psalm, and calling for the President to fail in all he does and for him to not cause harm to any person, animal, or Earth, among more. Some of the requests allegedly tell people to call to the spirits of the Earth, Air, Wind, and Fire, and to call on the ancestors and on demons.

There are numerous problems with this so called mass spell or curse, as follows;

1, If the President fails in all he intends to do as the spell reportedly alleges to intend, then parts or all of America will also fail, wherein many of the alleged witches reside. That is akin to shooting oneself in the foot.

2, Spiritual forces are real, and to advise those to tinker around with spells and magic when then they know not what they do, is playing with fire.

3, Most so called witches, even if they think they know what they are doing, know not what they do, and could not trick their way out of a paper bag.

4, If a spell is to be most effective, one would not tell the subject of the spell that they are going to do a spell upon them. This would be like going against Trump’s own philosophy of telling an enemy during war that one is going to attack them and on a specific time and date, giving them the chance to prepare a defense. An effective witch would curse first, then announce what had been done, or not at all. As such, Trump reportedly now has Christians from around the world that are praying for him as I type, and through midnight and tomorrow, reportedly to deflect the witches. One other report I heard stated that the President himself is engaging in a prayer circle tonight with over 100 Christians. That report is unconfirmed as of this publication.

5, Suggesting that one call on ‘demons’ is foolish, and comparable to praying to ISIL to help one escape violence. Demonic entities are arguably real, and – when channeled, reportedly often cannot be controlled by most so called ‘practitioners.’

6, The universe is a spiritual realm of cause and effect. If we put out evil intentions to hurt another, or do them harm, that energy reportedly can and often may come back on the sender. To encourage a mass group of people to harm The President when they know not what they do, is similar in the spiritual realm to inciting a skinny wimp to go attack a black belt in Karate.

7, Mixing Biblical scripture with the calling on demons shows further the ignorance of what is being promoted. The Bible itself warns against demon worship or demonology. This instruction is comparable to instructing a new student of Algebra to use Geography to solve a math problem.

8, If the call was for a prayer or even ritual to help guide the President to use good judgement, treat people fairly, and not harm the planet or other human beings, and bring peace, that would be reasonable, however, the so called ritual and spell being called on for many to perform is nothing more than a confused jumble of ignorance by misguided, metaphysically uneducated souls that know not what they do or what they toy with.

Let’s pray for peace for all in America and protection of our Earth and all peace loving people our great country, with harm to none. So mote it be!

Lana Del Rey, who is allegedly participating in the witchy curse as cited above, released a new video for her single titled “Love.” Although not as strong as many of her other songs, the video has already racked up over 14 million views online and growing.

Elite Connections CEO Sherri Murphy and Vice President Tammi Pickle were a hit at the L.A. VIP Red Carpet Party for Women in Entertainment this Tuesday, February 21st 2017 in Hollywood, California, where the women danced, and mingled. Their friend, the pretty Heather Wolfe (pictured) was also a hit on the red carpet, where at least one man begged to have his photo taken with the blonde bombshell. L.A. Matchmakers Elite Connections are providing select singles the opportunity to get free dating advice and a free consultation this and next month by calling 1-800-923-4200 or e-mailing the company through their official site at www.EliteConnections.com 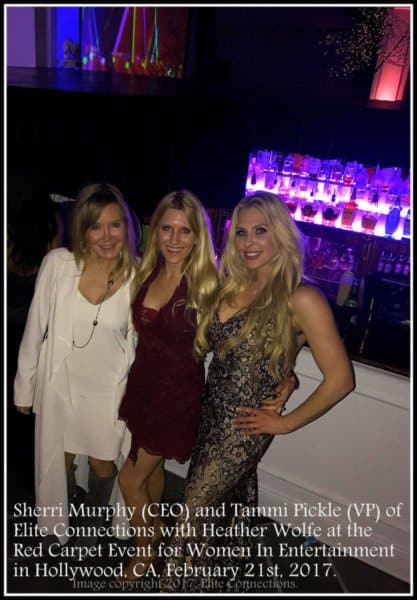 Academy Award® nominees Amy Adams and Jake Gyllenhaal star in the romantic thriller Nocturnal Animals from acclaimed writer/director Tom Ford (A Single Man). Susan (Amy Adams) is living through an unfulfilling marriage when she receives a package containing a novel manuscript from her ex-husband, Edward (Jake Gyllenhaal). The novel is dedicated to her but its content is violent and devastating. Susan cannot help but reminisce over her past love story with the author. Increasingly she interprets the book as a tale of revenge, a tale that forces her to re-evaluate the choices that she has made, and reawakens a love that she feared was lost. Also starring Armie Hammer and Michael Shannon, ‘Nocturnal Animals’ is a thriller reportedly of shocking intimacy and gripping tension.