CNN used to be a premier 24-hour news channel. It must have been at their peak when their never-ending mantra said they were “The Most Trusted Name in News.” A new series of CNN disasters see the channel imploding.

Their slide from grace began when they became chief media cheer squad for the Obama Administration. Then, like a bunch of outlaw cowboys, they jumped onto the anti-Trump bandwagon, and things went downhill from there.

CNN pretends it has journalists, but the CNN anchors must have skipped all of their classes.

Perennial CNN jackass, Jim Acosta, started a contentious verbal exchange with Donald Trump on day one of his presidency. He never stopped, even when ejected from the White House briefings.

While standing next to a high border wall in Texas, which was clearly preventing illegal border crossings, Acosta stated that because no people were crossing the border “walls don’t work.” Acosta got his comeuppance this month when his Enemy of The People book sales tanked. 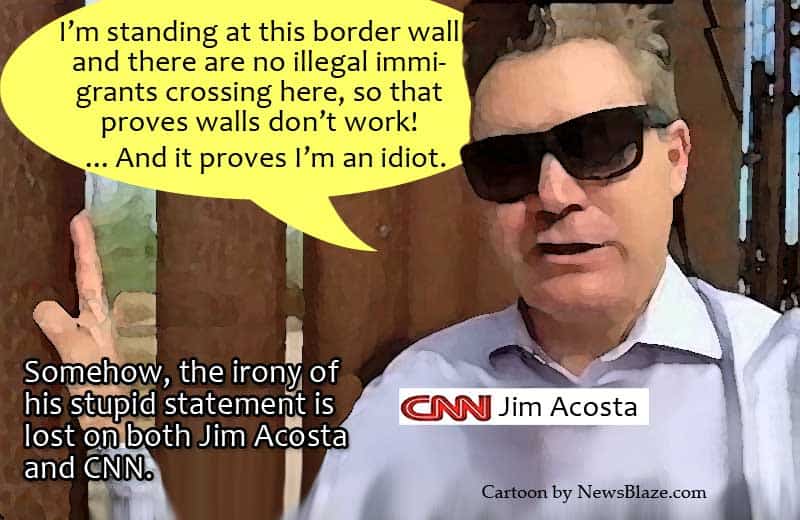 Americans abandoned CNN in droves, their ratings dropping in every new ratings period. They finally crashed by double digits just a few weeks ago.

CNN and the left’s Russia hoax has become evident in television news ratings the past few weeks. Millions of Americans who watch cable news became disgusted by the networks which perpetrated the collusion nonsense for two years.

The CNN ratings decline led to staff layoffs, just as they were moving to a new building.

Anytime they could poke a stick at Donald Trump, they have done it.

CNN (and MSNBC) had celebrity lawyer, Michael Avenatti on so many shows, that he seemed like a permanent fixture. Breitbart counted 108 appearances in two months. CNN loved Avenatti because he poked a sharp stick into Donald Trump. That lasted until Avenatti disgraced himself, and became a liability, so he has now disappeared.

The CNN disaster actually got worse this week. Anderson Cooper got into more trouble than he could handle when he interviewed a woman who claimed Donald Trump indecently assaulted her. The 30-second interview in the clip below wasn’t what CNN had in mind to attack Trump.

As is typical with CNN now, they didn’t understand what they were getting into. CNN did not investigate the story at all. All they saw was another opportunity to skewer President Trump, but it failed spectacularly.

CNN host Anderson Cooper moved quickly to a commercial break when the woman who has recently accused President Trump of assaulting her in the mid-1990s suggested that rape was “sexy.”

Cooper had asked writer E. Jean Carroll, 75, if she felt like she was a victim. During a discussion of her allegations with the CNN host, Carroll maintained that there was nothing “sexual” about her alleged rape in the dressing room of a New York department store.

According to Ms. Carroll, the incident happened in either 1995 or 1996, in a Bergdorf Goodman dressing room. She said she was preparing to try on lingerie when Donald Trump pinned her against a wall and pulled down her tights. He denies the allegation, and it appears she never told anyone about it before.

That didn’t matter to CNN, and they had Ms. Carroll on Anderson Cooper’s show. That’s when it all went wrong again for CNN. They should have learned their lesson by now because after jettisoning all pretenses of being a media organization, their failures vastly outweigh their wins.

Anderson Cooper can be heard in the video expelling air as he wonders what he’d got himself into once more.

The once Most Trusted Name in News is a complete disaster area.