Whether you are a Democrat, Republican or Martian, the question is how much is a president supposed to take? Take the case of CNN’s rude White House correspondent Jim Acosta.

Acosta’s baiting questions for the president are both biased and baseless for the most part. Acosta fervently believes it is his role at CNN to be rude and disrespectful of both the President of the United States and the office he holds.

The far left reporter has been conducting a contentious verbal exchange with Trump since day one of his presidency. It seems President Donald Trump has seen quite enough of the abrasive and highly partisan Acosta.

The latest incident occurred on Tuesday during a presidential meeting with President Nazarbayev of Kazakhstan. As is the norm, the two leaders met the media after their talks. They discussed future cooperation between the two countries.

There was nothing out of the ordinary for this routine gathering. The White House staff members tried to politely let the press know that this wasn’t the time to ask questions.

That was not going to stop Acosta who suddenly interrupted the proceedings. He yelled, “Mister President, Mister President.” He was immediately voiced-over by a female staff member who smiled and said, “Thank you everyone, thank you Jim.” 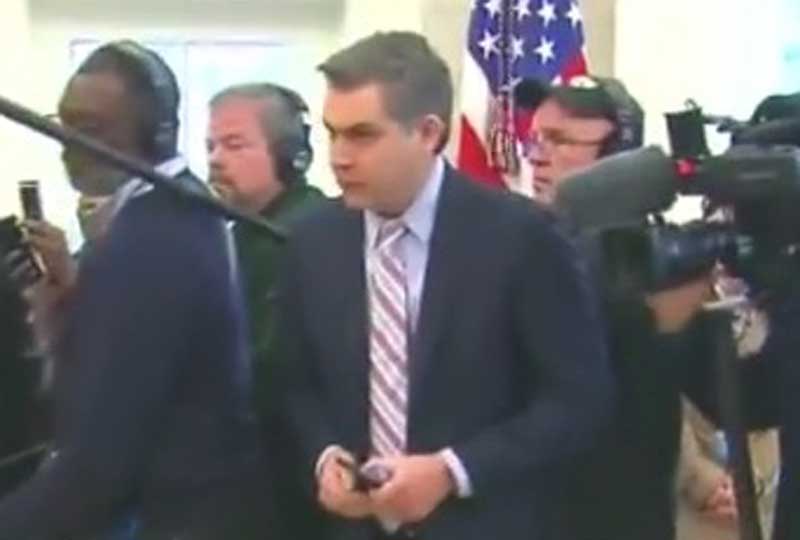 Not to be ignored, Acosta continued to speak right over the polite woman. He created his own scene directly in front of a foreign guest to the White House who sat in stunned silence. He began to scream out questions that had nothing to do with the event at hand.

A clearly irritated Trump said, “Thank you very much.” He actually said it twice trying to ignore the belligerent Acosta who clearly knew better than begin another of his political diatribes at this sort of moment.

Instead, the talking head of CNN shouted out a question about Trump’s alleged previous comments days earlier using the word “shithole” to describe Third World countries. It is a subject CNN has covered 24/7 all week.

Now clearly agitated, Trump gave Acosta a withering look and said, “I want them to come in from everywhere, everywhere.” It was a moment of truth as well as patience for Trump. “Thank you very much everybody,” he said.

It was a very tense moment for everyone in the room including embarrassed reporters. But that did not stop Acosta. “Just Caucasian or white countries, sir?” Acosta said. “Or do you want people to come in from other parts of the world, people of color?”

Red-faced Trump had heard enough. He pointed at Acosta and said one firm word: “Out.”

It has now become the norm for CNN reporters to be openly disruptive and abrasive. It makes no difference what the occasion is, including diplomatic meetings with other nations. There is no notion of appropriate behavior.

This is the very same network that accuses the president of being “Un-presidential.” All this happens while they shout out race-baiting questions while foreign visitors to our country look on.

After the verbal altercation, Acosta sat down with his CNN colleague Anderson Cooper. While chatting with his buddy, he commented about the incident and implied that his rights had been violated. “To have the president point at you and say, ‘You are out,’ goes beyond what the president should be doing in the Oval Office,” Acosta complained to Cooper.

The question for the American people to consider is this: Whether you are a Democrat, Republican or Martian, can you ever imagine this happening if the president had been Barack Obama? Therein lies your answer as to whether the Washington press corps and their handlers have two sets of rules with their “unbiased” coverage of this president.

CNN now thinks that asking if the president is racist during a diplomatic event is just fine, but the president asking a reporter to stop interrupting a meeting is the most appalling thing ever.

Will Acosta ever recover?