The struggles of anti-Trump 24/7 CNN continue. Since the Mueller report was issued essentially exonerating President Trump of any so-called Russian collusion, both CNN and MSNBC have suffered a substantial ratings decline. It seems their viewers feel duped at the cable news channel’s outward hostility toward the president.

On Tuesday it was announced that CNN is reducing staff as they move into new headquarters. Morale at the network has reached an ebb low as ratings plummet and advertising revenues dry up.

Thus far, over 100 CNN employees have accepted a voluntary buyout option. That includes CNN International executive vice president Tony Maddox among the staffers departing the ratings-challenged network after 21-years at the company.

It appears this is only the beginning of harsher measures to shore up the faltering network. Although the buyouts have been made public, rumors persist that mass staff layoffs are on the horizon. 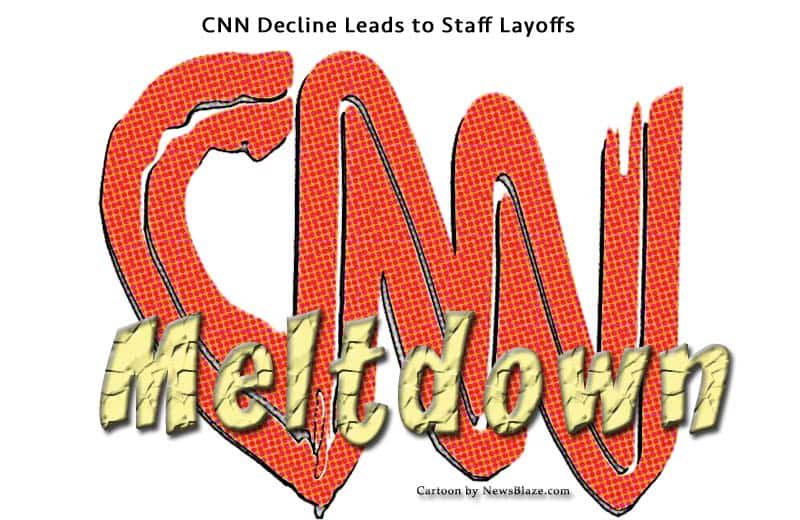 Countering the persistent rumors, CNN Executive Vice President Allison Gollust told Fox News, “There are no mass layoffs at CNN. I have no idea where that crazy rumor came from. We have recently offered a voluntary buyout option for employees, and just over 100 people voluntarily decided to take it. That’s it.” She added, “‎We have nearly 4,000 people at CNN and around 100 of them exercised the option for a program that was offered. That’s it. Those are the facts.”

But the facts speak for themselves. Since the Mueller report, the ratings slides of both CNN and MSNBC have been shocking in their rapid decline. Ratings mean ad revenue and ad revenue fuels the organization. At the pace the decline has happened, 100 employees will not be anywhere near what must be done to eliminate encroaching red ink.

CNN executives are looking to eliminate approximately 300 jobs. Those not accepting voluntary buyouts face elimination outright. Presently, bureau chiefs and award winners are among the staffers accepting the golden parachutes with lesser titled employees to follow.

Although CNN’s new headquarters has been seizing the headlines, the undercurrent is dismal. Viewer decline is difficult to resurrect once it begins and a total overhaul of the network’s ultimate business plan could be forthcoming.

The new facility on Manhattan’s West Side features condominiums which start at $4.3 million, high-end restaurants and stores such as Cartier, Rolex, Louis Vuitton and Neiman Marcus. If the downslide continues for the network, those retailers could become concerned for the location. Even worse, how will these expensive brands feel about being associated with a loser?

But the stark reality is this: The network finished April down double digits across multiple dayparts. CNN finished the month as the number 15 network on basic cable, behind channels such as Food Network, Hallmark Channel and History.

Rival Fox News was rated number one. They were the most-watched primetime network, averaging 2.4 million viewers compared to only 767,000 for CNN. It was only a matter of time until staff layoffs started being noticed.