The curious world of today’s liberal media is striking in its hypocrisy. Take the glaring example of adult star Stormy Daniel’s attorney, Michael Avenatti. Until earlier this week, he was the darling of Trump-hating outlets such as CNN and MSNBC. They could not book him enough times during a 24-hour day.

Liberals on cable news glowed in his anti-Trump rhetoric and the portrayal of his client as a modern-day Joan of Arc. It was a ratings bonanza for an audience short on much else to do but bask in perceived bad news and their hatred of the president.

But something curious happened after Avenatti’s 15-minutes of fame; he disappeared. Where did this darling of the left go? The reason was close at hand.

Last Tuesday, a federal bankruptcy court judge in Southern California ended Stormy’s lawyer’s favorite son status with the liberal media. That should be updated to include an investigation of him by the California Bar Association. His law firm was ordered to pay $10 million to an attorney who claimed that Avenatti’s firm stiffed him on the first installment of a $4.85 million settlement.

That ended the circus act quickly. Stormy’s mouthpiece went from tyrant-killer to “tax cheat” quicker than a liberal can accuse you of racism. Michael Avenatti became a pariah on social media. 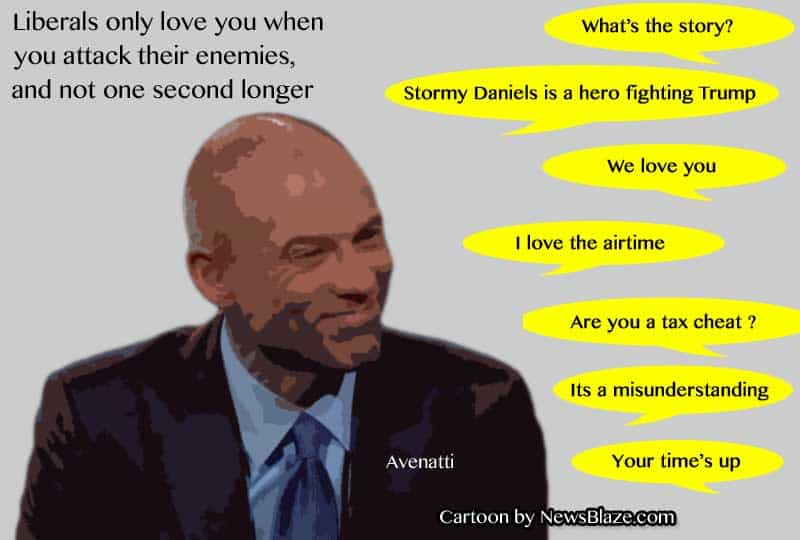 When things go south in the world of liberalism, you do not want to be on the losing end. Loyalty is an eight-letter word and it has little meaning when you have nothing left to offer. In Michael’s case, no ratings, no relevance.

But Avenatti has his memories. Ah, the moments of triumph when the liberal world was his for the taking. He ascended to CNN stardom as his client, known best for accepting money to perform sex in front of a camera, played victim in white lace and bifocals. Her fight against a legally binding confidentiality agreement prevented her from discussing an alleged 2006 sexual encounter with Donald Trump.

Since the liberal media has no memory of their fallen idol, Bill “Bubba” Clinton – poor, innocent, fresh as the morning dew, Stormy, was fighting the dastardly evil Donald Trump. Forgotten were names of real victims like Paula Jones and Juanita Broaddrick. So, a professional adult star was today’s Mary Pickford in the eyes of the media elite.

‘Slip and fall’ Michael did not appear on CNN last Tuesday and the hundreds who watch that network or ‘MSLSD’ needed their fix. In fact, it is reported that several angry viewers hired someone to write a complaint letter.

Mike had a good run though. He was in the liberal network’s green rooms more times than a “progressive” can say, “At the end of the day.” Last week, Rich Noyes and Bill D’Agostino of the Media Research Center reported that from March 7 to May 15, Avenatti was interviewed on national television a whopping 147 times.

The biggest non-surprise of all that? Seventy-four of the appearances were on Jeff Zucker’s CNN.

Much like a scorned politician who faces the media to announce his so-called retirement to address “family matters,” Avenatti told Fox News, “I am scheduled to be on a number of networks, including CNN. I have been dealing with some medical issues for a close family member that I am caring for.”

Sure Mike, that’s the reason. Good luck with that and the other matter with the courts. The biggest surprise was CNN‘s response to MIA Mike; no response at all.

But fighting Mike isn’t going down without a pathetic fight. He has threatened to take legal action against reporters who reported unfavorable news about him. That includes a Los Angeles Times reporter. That’s the person who revealed how MIA Mike was hit with a $10 million judgment in bankruptcy court.

Avenatti is getting a lesson in Liberalism. The truth is only useful when it supports their side of the argument. When that is no longer the case, there is no longer any use for you.

Got that Mike? Now get back to Stormy. The cross she is carrying grows heavier.