There are only two big-budget films this week, A Bigger Splash, rated R, and Captain America: Civil War rated PG-13. In the Independent & Foreign Films section, there are eight releases. They are Beautiful Something, Dark Horse, Elsetree 1976, A Monster with a Thousand Heads, Mothers and Daughters, Pele: Birth of a Legend, Phantom of the Theatre, and Rabin in His Own Words. 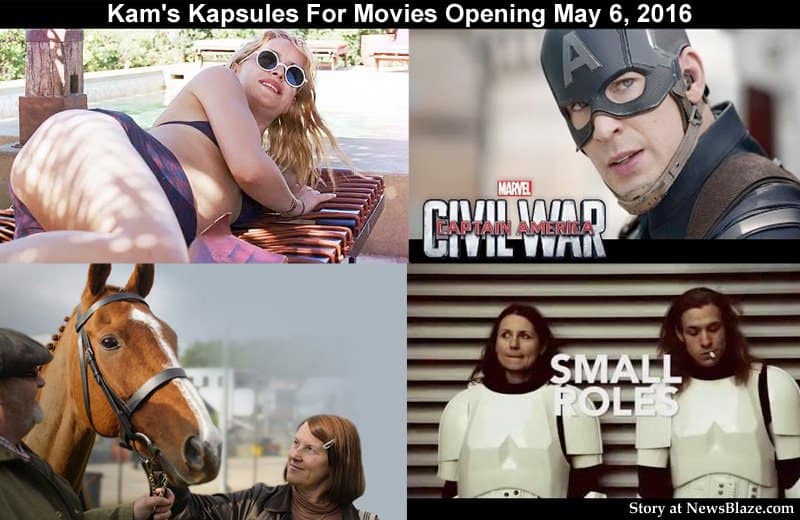 A Bigger Splash is a psychological adult drama, loosely based on the movie La Piscine, released back in 1969. It is powerfully acted by a very talented cast. The plot revolves around a female rock icon, played by Tilda Swinton. Her vacation with her boyfriend, played by Matthias Schoenaerts, on a remote Italian island is disrupted by the arrival of an old friend, played by Ralph Fiennes and his daughter, played by Dakota Johnson.

Beautiful Something is a homoerotic ensemble drama following the fates of four gay males. The four actors are Colman Domingo, Zack Ryan, John Lescault and Brian Sheppard. It follows their relationships throughout one very eventful evening. Supporting cast includes David Melissaratos, Grant Lancaster and Matthew Rios. Beautiful Something is unrated.

Dark Horse is an inspirational, rags-to-riches documentary fairy tale. A cleaning lady wanted a racehorse, and a group of working-class Welshmen helped her buy one. The horse didn’t know he wasn’t supposed to be as good as all the others.

Elsetree 1976 is a nostalgic documentary that follows the lives of the actors and extras who played supporting roles in the original George Lucas Star Wars movie, through to J.J. Abrams’ recent blockbuster The Force Awakens.

There are human highs and lows, including probably the most iconic villain ever down to the actor whose character was cut from the final original film. We get to see the eccentric community these people have formed.

A Monster with a Thousand Heads

A Monster with a Thousand Heads is a revenge thriller about Sonia, a desperate woman, played by Jana Raluy, who takes the law into her own hands. Her insurance company denies medical care for cancer-stricken husband. Her desperation triggers a primal survival instinct in her, and we see a series of increasingly violent confrontations. Featuring Sebastian Aguirre, Hugo Algores and Emilio Echevarria.

A Monster with a Thousand Heads is unrated. (In Spanish with subtitles)

Mothers and Daughters is an ensemble drama. A female rock photographer is on a career high when she unexpectedly becomes pregnant. Looking inward, instead of outward through her camera lens, she reconnects with her estranged mother.

Mothers and Daughters is rated PG-13 for mature themes and brief drug use.

Pele: Birth of a Legend

Pele: Birth of a Legend is a soccer biopic. The legendary Pele, played by Kevin de Paula, rise from the slums of Sao Paulo and changed soccer forever. He rose to lead Brazil to its first World Cup victory at age 17.

This is a documentary soccer fans want to see. The cast includes Colm Meaney, Vincent D’Onofrio and Rodrigo Santoro.

Pele: Birth of a Legend is rated PG for smoking, mature themes and mild epithets.

Phantom of the Theatre

Phantom of the Theatre is a fantasy haunted house horror flick, Set in Shanghai. A haunted theatre is filled with the spirits of a performance troupe who were trapped and murdered in a fire 13 years ago. The theatre is haunted, and the vengeful spirits are just waiting for the playhouse to open again, so they can exact revenge on new victims.

Phantom of the Theatre is unrated.

Rabin in His Own Words

Rabin in His Own words is a reverential biopic about Yitzhak Rabin (1922-1995), narrated by the assassinated Israeli Prime Minister himself from rare archived news footage and home movies and his personal letters. He was the son of a labor leader prior to the State of Israel being formed. He became a farmer, joined the army and was present at some of the most critical points in Israel’s history.

Only 5 critics have rated this so far at Rotten Tomatoes, but all 5 liked it, giving it an average rating of 9/10.

Rabin in His Own words is unrated. (In Hebrew with subtitles)