Dark Horse is a fairy tale about a cleaning lady who wanted a racehorse, the kind villagers who helped her buy one, and a horse who didn’t know he wasn’t supposed to be as good as all the other horses.

Jan Vokes grew up in the Welsh valleys, the daughter of a miner who bred pigeons and whippets. As well as cleaning, she also served behind a bar in a working mens’ club. One night, she overheard a local accountant, Howard Davies, tell a friend how much money he’d lost when he owned a share in a racehorse.

Like all great visionaries, Jan ignored the facts, and decided that owning a racehorse was not only a good idea for her, but also for everyone else in the village. She galvanized her husband, who clearly knew better than to argue with his Boadicea, and then assured Howard that second time around would be a charm. He was no match for the irrepressible Jan and, with that, the Cefn Fforest syndicate was launched. When the foal finally birthed in a shed on an allotment, Jan was given the privilege of naming him. She decided he would be called Dream Alliance. 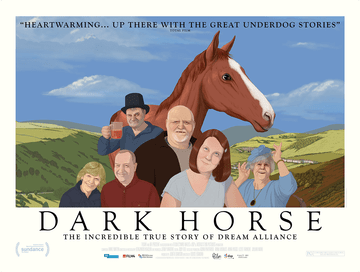 There are a few woefully short, edge-of-the-seat clips of Dream’s races but, as thrilling as these snippets are, it’s the interviews with Jan and her cohorts that take this unique story on its dramatic journey. Although the villagers only ever talk about their experiences with the syndicate, their stories are played out against a backdrop of the 80s economic collapse that assaulted every mining community in the country. Had Mrs. Vokes been at the union’s helm at that time, there would undoubtedly have been less saber-rattling and more effort made to save both the coal industry and the pride of its men.

Perhaps the most poignant moment in this film is when Dream’s owners have to decide to either take the money and run, or repay their sturdy mount by showing him their gratitude for giving them the ride of their lives. The decision is an easy one for the villagers but definitely not one Big Racing would ever quite get.

There is no country more classist than the U.K. and this is illustrated perfectly by the syndicate’s interaction with Dream’s haughty trainer. He takes snobbery to quite another level by comparing Dream to a working class school-boy who turned up at a fee paying school by mistake. The dark horse must have overheard this crass comment, as he keeps his lowly birthright to himself, and the other horses never find out that he isn’t a toff.

If you can’t catch it at the movies, it’s streaming and for sale on Amazon U.K.

Screening in Los Angeles and New York 6th May, 2016