The US has left the UN Human Rights Council alleging that its skewed reports tend to upbraid certain countries which try their best to maintain their human rights record unblemished while, in the words of US Ambassador to the UN Nikki Haley, it ignores “the misery inflicted by regimes in China, Venezuela, Cuba, and Zimbabwe.” Condemning the council’s “shameless hypocrisy” she also called the outfit the UN’s “greatest failure.”

Bahrain had already vehemently questioned the council’s “biased and fabricated” report earlier this month at a forum in Geneva. “The seriousness and credibility of these sources are debatable,” Bahrain’s Deputy Foreign Minister said. The ground reality in Bahrain is certainly very different from what the council claimed. 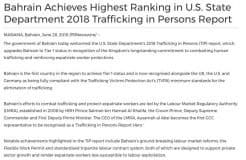 Dismissing the report, the Bahrain minister had said: “These organisations have a narrow interest that doesn’t aim to promote or protect the good interest of Bahrain. We are ready to provide any information and more details whenever the committee demands and we believe we deserve an equal opportunity to respond, so that the committee can verify the facts. There is an imbalance in the evaluation which is unacceptable, and is repeated with every UN and international body.”

However, in the middle of the questionable and messy assessment by the UN Human Rights Council, a report released by the UK government and covering the same ground comes as a breath of fresh air. The UK’s Human Rights and Democracy Report for 2017, issued by the British Foreign Office, appreciates Bahrain’s efforts to protect the rights of women, children and expatriates.

“The UK supports the development of human rights monitoring bodies in the country which work to safeguard human rights, provide independent oversight of security personnel, monitor standards of detention, and investigate allegations of mistreatment,” says the report, adding that “the National Institution for Human Rights, has taken steps to ensure that all Bahrainis can report alleged human rights violations and abuses, including through a new widely-advertised hotline.”

It also highlighted Bahrain’s acceptance of UK recommendations made last year at the UN Human Rights Council, including a national strategy to tackle trafficking of women and girls – as well as ratification of the 2014 ILO Protocol to the Forced Labour Convention.

Inded Shura Council [Upper House of Bahrain Parliament] human rights committee chairman Ahmed Al Haddad said: “Overall it is a positive rating of our human rights record by the UK and I feel it’s important to have a dialogue directly with a country, unlike other institutions – such as the UN High Commissioner for Human Rights – that do the opposite.”

Indeed such was Bahrain’s frustration with the inaccurate UN report that at the Geneva meet, Bahrain’s Deputy Foreign Minister was constrained to edify the panel by stating that “Rights and freedom are the pillars of Bahraini society, governed by democracy and rule of law. Policies adopted are accompanied by executive procedures and implementations are based on human rights values and principles.”

He also highlighted the report of the Bahrain Independent Commission of Inquiry, establishment of the Ombudsman, Special Investigation Unit, Prisoners and Detainees’ Rights Commission, Government Action Plan 2015-2018 and the latest achievement of Bahrain receiving Tier One ranking on the US State Department’s 2018 Trafficking in Persons (TIP) report.

Considering that Bahrain is the first country in the six-nation Gulf Cooperation Council to achieve this, it’s an acknowledgement of its efforts to combat human trafficking. No wonder Bahrain has found it galling that the powers-that-be at the human rights council of the world’s leading body, the United Nations, should ignore all this and rely on unverified sources.