As the Imran Khan Government draws global attention to Kashmir with a diplomatic offense against India for “human rights atrocities” in Kashmir valley, Pakistani Christians are knocking at the UN doors with the plea “Save us from HR abuses.” They held a rally before the UN Human Rights Council in Geneva. “We want justice. Save our girls from forced conversion to Islam, We demand roll back of inhuman blasphemy laws” – read the placards.

Some two hundred of them staged a protest outside Geneva’s historic Palais Wilson and marched to the UNHRC headquarters to highlight “a much deeper, infinitely more startling malaise” of Christian persecution in the land of the pure as Pakistan is known.

Member of the European Parliament, (MEP), Herve Juvin of France and Mario Silva, Executive Director of Canada’s International Forum for Rights and Security, joined the protestors’ call for global pressure on Imran Khan Government to end repression of minorities.

Chanting varieties of “Stop Pakistan” slogans, the marchers highlighted abuse, hostility, and aggression from security forces as well as civilians. “Forced disappearances, arbitrary detentions, and forcible conversions have made living dangerous for Christians,” they said. Their message to the UN: Pakistani Christians are being harassed, arrested, abused, beaten, tortured, and killed all for the so-called “crime” of their spiritual beliefs. Pakistani penal code provides for the injustice of religious persecution through its discriminatory blasphemy and religious defamation laws. 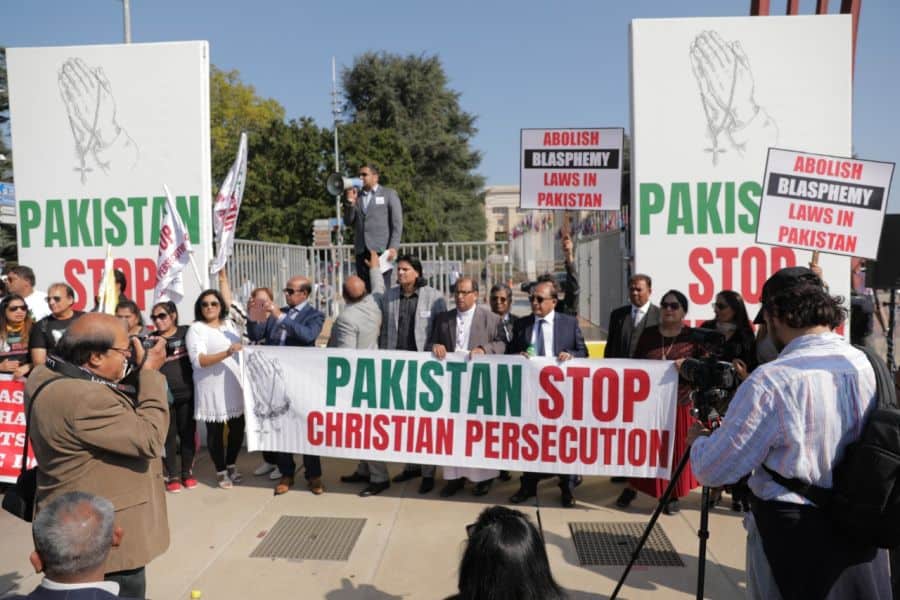 Voicing grave concern over the safety Christians in the Islamic Republic, Silva, who is also a former Canadian lawmaker, thundered: “The world has failed if it remains deaf to the voices of almost four million Pakistani Christians, who live their daily lives in fear.”

He lamented that there is no Christian boy or girl, man or woman, father or mother, grandmother or grandfather “who can be considered safe from the Pakistani blasphemy laws.”

MEP Juvin agreed with him that Christians in Pakistan are suffering untold discrimination. “All Christians [in Pakistan] suffer from institutionalized discrimination,” he pointed out and remarked that only occupations seen as low, dirty, and derogatory are officially reserved for Christians. “Many Christians are very poor, and some are victims of bonded labour and forced to clean toilets,” he lamented.

Both the European leaders and other speakers agreed that Christians are not the only minority community suffering hostility, discrimination, and heavy-handed abuse at the hands of the Pakistani government and its security forces. “But the reality is that the Christian community in Pakistan is arguably one of the communities attacked most often. The persecution and abuse faced by Pakistani Christians is cross-cutting and inter-sectional. “

MEP Juvin declared, “We politicians of Europe are gathered here today to remind the world that Pakistan’s blasphemy laws must be changed to ensure that Christians in Pakistan are no longer persecuted.”

Pakistan’s blasphemy laws play an integral role in the institutionalized persecution facing the Christian community, as well as other minorities in the country. “The blasphemy laws allow any non-Muslim to be accused of insulting Islam quite easily, without any solid evidence, and often based on simple story telling and vindictiveness,” said MEP Juvin. “Any judicial system that is not evidence-based,” he declared, “cannot be called a judicial system at all,”

Observers consider the presence of MEP Juvin at the Pakistani Christians rally significant, as the European Union (EU) has a special working relationship with Pakistan.

Under the Generalized Scheme of Preferences (GSP+), the EU gives Pakistan full removal of tariffs on almost one-third of tariff lines. In order to even be considered for the preferential status, Pakistan is required to both ratify and effectively implement 27 international conventions on human rights and labour rights, environmental protection, and good governance.

Twice in the past, in April 2014 and June 2017, the European Parliament adopted a resolution against religious persecution in Pakistan, and called for action to stem human rights abuses against some of its most vulnerable people.

When allegations arise that Pakistan has breached the terms, the EU is supposed to send a team to monitor the situation and develop appropriate solutions.

The Geneva rally may trigger such monitoring. The protest has highlighted that there has been no initiative from the Pakistani government to actually address its abusive terrorization of Christians and other minorities.

“The community of Pakistani Christians across Europe seeks to motivate the UN and all other appropriate international and national bodies to utilize the diplomatic and political channels available to them in order to actually do what is in their mandate: secure and protect human rights for all people, in all places,” a community leader told reporters on the sidelines of the rally.

“No one is safe from Pakistan’s blasphemy laws,” the community leaders said. Any form of appeal for justice is “systematically hampered.” Legal assistance to the victims is “futile,” they said, adding that Pakistani Christian boys, accused of blasphemy, are thrown in detention in filthy jail cells for indeterminate periods where they are beaten and starved.

Making up 1.6% of Pakistan’s nearly 207-million people, the Christian community continues to suffer a host of maladies that range from forced disappearances to arbitrary detentions and forcible conversions under the heat of Pakistan’s “fundamentalism-obsessed” regime, and increasingly radicalised society.