US and UN deplore the attack!

Insecurity looms again when Buddhist mobs went on a rampage in western Burma’s Rakhine state of Sittwe as they attacked offices of United Nations and international aid organization.

According to media reports, hundreds of ethnic Rakhine Buddhists destroyed windows at the offices of German medical aid group by hurling stones.

In addition, United Nations offices were also damaged by the spread of riots. These incidents and the escalating insecurity are affecting the delivery of humanitarian aid to those displaced people, isolated villages and Rakhine communities.

UN and US deplore the violence 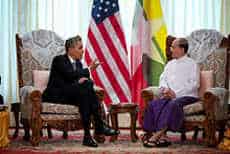 Showing concern in the wake of the incident, Secretary-General Ban Ki-moon spoke on the phone to Myanmar President Thein Sein. The UN Secretary General urged the president to ensure the safety of all UN humanitarian members.

US Deputy Department Spokesperson Marie Harf also made statements on the escalating violence in Rakhine State.

In her remarks in Washington DC, Ms. Harf said the US is deeply concerned by the humanitarian crisis in Burma’s Rakhine State.

She said the recent attacks on UN and NGO offices have worsened the situation particularly in the delivery of aid to 140,000 internally displaced persons and hundreds of thousands of additional individuals in need.

Ms. Harf added that large segments of the population do not have access to adequate medical services, water, sanitation, and food.

Despite the spark of violence, humanitarian aid workers cotinue to provide assistance including food, water and healthcare to those in need.

Burmese government fails to provide security for the aid workers

Ms. Harf also made a remark criticising the government for its

failure to provide adequate security and the travel authorizations necessary for the humanitarian aid workers to resume their life-saving services.

The US is also calling on the Burmese government to rescind travel restrictions and to facilitate the appropriate travel authorizations to the United Nations and other humanitarian organizations so they may resume services to all vulnerable people in Rakhine State.

“We further call on the government to take meaningful steps to provide security for all humanitarian workers and residents of Rakhine State.” – Ms. Harf

In addition, Ms. Harf emphasized that the top United Nations official in Myanmar has described the attacks on the premises of UN agencies and non-government organisations in Sittwe “an attack on the entire humanitarian response in Rakhine State.”

Rakhine state has been engulfed by waves of violence between Buddhists and Rohingya Muslims, leading to the death of hundreds of people and displacing tens of thousands people.

Records of violence in Rakhine State

Earlier this year, more than 40 Muslims were killed when Buddhist mobs attacked a Muslim village in Myanmar’s Norther Rakhine State.

According to media reports, a total of 280 people were killed, most of them Muslims, when sectarian violence raged in the country since 2012. Another 250,000 people have fled their homes as well.

According to various UN reports, “Tal camp set up in the year – 2002 at Teknaf Upazila under Cox’s Bazar district again it relocated at Leda Bazar Camp.”

Around 34,000 Muslim refugees created a new camp known as Kutupalong, between 2009-2010. At the same time, the UN report says there were around 300,000 undocumented stateless Rohingya Muslim minority refugees, whom Myanmar had refused recognition as Myanmar citizens for many years. They had taken shelter and were staying illegally around Cox’s Bazar, Bandarban and Chittagong districts of Bangladesh, one of the poorest areas in Bangladesh.

The United Nations World Food Programme (UNWFP) reports, “About 200,000 to 400,000 Rohingya Muslim refugee spontaneously had settled across the Cox’s Bazar district of Bangladesh in June, 2010, while in June, 2012, there are around 92,000 refugees once again fled from their native areas Arakan State after ethnic conflict occurred between ethnic Rakhine Buddhists and Rohingya Muslim Community, but Myanmar Government in this connection stated about 52,000 Rohingya peoples fled from the nation after the ethnic clash broke out.”

According to the Rohingya Muslim Community leaders, “It is fact that a number of factors linked to legal, political, economic and social aspects had persuaded the Rohingyas to cross the Bangladesh-Myanmar international border and entered into Bangladesh, Saudi Arabia, Malaysia, Pakistan, India, Thailand, Australia, and in various Middle East and European countries in a scattered way. Out of about the 2.5-million Rohingya Muslims, around 2-million were claimed to be living outside their country of origin, Burma. But, in this context, Bangladesh always took a silent spectator’s role.”

Myanmar is dominantly a Buddhist nation of 60 million people and Northern Rakhine is home to 80 percent of the country’s 1 million outcast Muslim Rohingya population.

Amid evidence of massacres and violence, the Myanmar government has repeatedly denied the outbreak of violence against Rohingya Muslims.

Even the Chief Minister of Rakhine state Hla Maung Tin told people about “false news published and aired by foreign media that children and women were killed in the violence.”

According to the UN, there are around 1 million Rohingya in Myanmar. The US called them one of the most persecuted minorities in the world.

Some of the Rohingya have been denied citizenship, making them stateless. For many decades, they have been persecuted and discriminated against.

US Concerned About Violence in Northern Rakhine State

In a press statement in Washington DC, deep concern was expressed over reports that at least 40 people have been killed, as well as the disappearance of a police officer.

“We reiterate our call for the Government of Burma to launch an immediate, credible and independent investigation into the violence and hold accountable those responsible.” – US State Department

The US encouraged the Government of Burma to work toward a durable solution in Rakhine State that addresses the underlying causes of conflict in the state to create conditions for sustainable peace and development.