The Burmese military ruler Than Shwe is visiting India this week. The chairman of the State Peace and Development Council is supposed to meet many high profiles in the largest democracy of the world. Senior General Than Shwe is expecting moral support and endorsement from New Delhi for the proposed general election in Burma (Myanmar).

The international community may not impose faith on the proposed election later this year, but the regime at NayPieTaw has completed all necessary formalities for the polls to be held after two decades in the Southeast Asian country. From the United Nations to Amnesty International and America to several other democratic and progressive nations, every one has raised voices for a free, fair and comprehensive election in the poverty stricken country. They are unanimous in their views that the proposed election would bring little change for the poverty stricken nation.

Meanwhile, Burma Centre Delhi has submitted a memorandum to the Indian prime minister Dr Manmohan Singh urging New Delhi to denounce the proposed 2010 Burma election, unless the military regime initiates for the release all political prisoners including Daw Aung San Suu Kyi, engage in genuine political dialogue and review the 2008 Constitution. The India based pressure group has also appealed the government to pursue with the Burmese military regime for a free, fair and inclusive election in Burma. 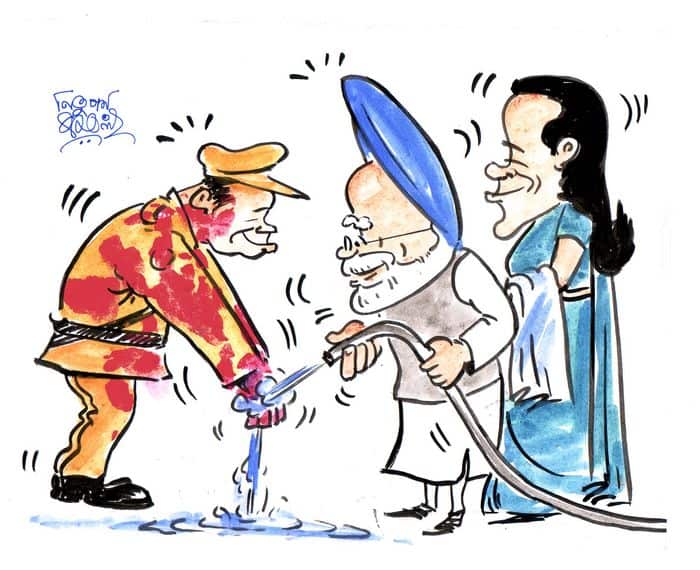 “We are deeply disturbed with the official visit of General Than Shwe to India as he does not represent the 50 million peoples of Burma. Rather the dictator represents only the military regime that has been culpable in mass atrocities and many systematic international crimes. Than Shwe is also solely responsible for attempting to assassinate Ms Suu Kyi, in what has become known as the 2003 Depayin Massacre,” said in the memorandum, which was endorsed by a good number of organization and individuals.

The Burmese Head-of-State is meeting the Indian President Pratibha Devising Patil, Prime Minister Manmohan Singh, the UPA chief Sonia Gandhi with other dignitaries during his visit. Than Shwe will also meet some Indian business-giants including the TATA group before he left India.

An Indian sympathizer to the pro-democracy Burmese cause argues that New Delhi has provided some legitimacy to the junta in its endeavour to continue ruling the country with different attire. He has also criticized the Indian government for giving an opportunity to Than Shwe to ‘clean up some of his blood stained hands’ after all the rights violation activities in Burma.

Even the International Federation for Human Rights has termed the State visit of General Than Shwe to India a shame for the world’s largest democracy. In an open letter to Dr Manmohan Singh, the rights body urged for New Delhi’s indirect responsibility for improving the grave human rights violations in Burma.

Earlier the Burmese communities living in different parts of the world had taken the opportunity to celebrate 65th birthday of the pro-democracy icon Ms Suu Kyi and tried to draw the attention of international community. In fact, the pro-democracy activists and sympathizers used the event to start coordinated demonstrations against the military controlled election in their country.

The democratically elected leader of Myanmar, Ms Suu Kyi had observed her birthday on June 19 once again under the house arrest in Rangoon. Not only the Nobel Peace Laureate lady, the military junta has imprisoned over 2000 political leaders and activists. They are denied free movement as well as liberty to participate in the forthcoming election.

After observing the Global Day of Action on May 27 in many countries, the exile Burmese celebrated Ms Suu Kyi’s birthday spreading the message that the great lady continues to be a symbol of freedom and democracy for people in Myanmar.

Amnesty International also advocates for the release of all political prisoners including Ms Suu Kyi. The London based rights body has urged the Association of Southeast Asian Nations, of which Myanmar is a member, to pursue with the junta for an immediate and unconditional release of all prisoners of conscience. It also insisted for protection of rights to freedom of expression, peaceful assembly, and association throughout the elections period and beyond in Myanmar.

“ASEAN has repeatedly emphasized that the elections should be held in a ‘free, fair and inclusive manner’. Yet those calls do not go far enough to highlight the human rights that are most at risk in the elections context. Indeed, the Myanmar government has not taken any steps to improve its poor human rights record as the polls approach’, said Benjamin Zawacki of AI.

The India based Burmese and their supporters also celebrated Ms Suu Kyi’s birthday in the national capital with various programmes and expressed their solidarity to the democratic movement of Burma.

A number of Indian parliamentarians, diplomats, political leaders, civil society activists, journalists and other sympathizers attended the program. A memorandum was also sent to the Union government by the demonstrators with various demands and appeals.

On the other hand, the Indian Parliamentarian’s Forum for Democracy in Myanmar has urged the UN Secretary General Ban-Ki-moon and also friendly countries of the Burmese regime to adopt pragmatic actions for the release of Ms Suu Kyi with other political prisoners in the country.

The Parliamentarian’s Forum has sent letters to the Heads of the States and Governments of Australia, European Union, UK, France, Norway, Russia, US, Indonesia, Japan, Singapore, Thailand, Vietnam, China and India strongly urging them to keep on pressurizing on military rulers of Myanmar to engage Ms Suu Kyi in the process of democratization.

The junta’s proposed election, understandably on October 10 this year, has already shut the door for Ms Suu Kyi and her party National League for Democracy (now de-registered). It might be mentioned that the NLD and other democratic parties of Myanmar recorded a landslide victory in the May 27, 1990 election, but the military junta did not recognize the outcome of the polls. And shockingly, the group of Generals imprisoned many opposition political leaders and many elected representatives left the country to take refuge in foreign countries.

The Parliamentarian’s Forum has appealed the Heads of the States and Governments not to endorse and recognize the 2010 election result if the constitution announced in 2008 is not amended and if political prisoners are not released before the polls. They were supported by the Burmese exile groups organizing demonstrations against the imposed military election in front of Myanmar Embassy, United Nations building and other public places on the day to draw the attention of the international community.

Global Day of Action under the Global Campaign Against Myanmar’s 2010 military election was initiated by Ten Alliances of Burma’s movement for democracy and ethnic rights representing broad-based and multi-ethnic cooperation of political and civil society organizations from inside and outside Myanmar. The initiative, which has been endorsed by over 150 organizations in the world, is aimed to raise voices against the plight of Burmese people including the monks.

“It is already clear that the military’s elections this year will not be a step forward that Burma needs. The NLD and many ethnic groups have already decided that they cannot participate in such a sham election. The Indian government should stand with the people of Burma in demanding genuine democratic elections, rather than supporting the military’s election,” said Dr Tint Swe, MP elect in 1990 Myanmar election.

Speaking to this writer from New Delhi, Tint Swe of NLD also added, “The people of Burma put their choices bravely twenty years ago, but their mandates were bulldozed by the junta. In 1990 election, 235 political parties put their candidates, where as till date only 42 parties have decided to join the 2010 election. Moreover, instead of an election fever in Burma, we have observed an election fear in our country.”

In the meantime, the Myanmar Election Commission issued a directive on June 21 prohibiting the political parties on campaigning that ‘harms security, the rule of law and community peace’. With this order, the regime has simply tried to deny the freedom of expression, peaceful assembly and association in Myanmar.

Condemning the military dictatorship of Myanmar as well as its flawed election laws, the senior Burmese political leader demanded an immediate release of all political prisoners. Even the UN Secretary General Ban Ki-moon and the US President Barack Obama also joined in the chorus for the release of Ms Suu Kyi.

Dr Swe concluded saying, “We demand for a genuine political dialogue with opposition and ethnic groups of Myanmar before the election. Moreover, we reaffirm our conviction that the people of Myanmar deserve the freedom to choose their future for themselves.”

Pu Kim, a young political activist based in New Delhi said, “We, the exile Burmese in India or anywhere in the globe are actually calling on international governments to denounce the proposed Myanmar election and reject the results under this situation. The Chinese and Indian governments with the member-countries under the ASEAN are being urged primarily, as those nations have maximum influences on the junta.”

The United Nations Special Rapporteur on the situation of human rights in Myanmar, Tomas Ojea Quintana also urged the junta to release Ms Suu Kyi immediately. He also called upon the junta ‘to release all prisoners of conscience in order to create the conditions for an inclusive election process and to demonstrate that it intends to take a more serious and sincere approach to its international obligations to uphold human rights’ in Myanmar.

“We expect a unified worldwide action against the military rulers of Burma would finally help in denouncing the proposed sham election. We also want the election result not be recognized by the international community,” said Thin Thin Aung, a lady exile in India. She also added, “We demand for release of all political prisoners including Suu Kyi, cessation of hostilities against ethnic & democracy groups and review of the 2008 constitution.”

Even the ASEAN Secretary General Surin Pitsuwan admitted in an interview that the Myanmar election might not be perfect. But the soft spoken gentleman and former Thai foreign minister argued that it would be the beginning of an initiative emphasizing on a genuine national reconciliation and finally would lead for a real democracy in Burma.