The Taliban and the people of the Talibani thought in the Swat Valley in Pakistan have given a strong blow to Pakistan and have succeeded in implementing Sharia Law there. There has been an agreement between the Taliban leaders and the Pakistani government regarding it.

After this agreement, the Pakistan government is trying its best to help the US and other parts of the world to understand that under the present anarchical atmosphere in the region, this is an interim arrangement, in Swat Valley. But this statement about the implementation of Sharia law is neither being digested by the US nor by other countries. The people of the world have only one opinion about this implementation of Sharia law and that is the Pakistan government and the Pak army has bowed down before these enemies of humanity.

Once, the British Queen Elizabeth had visited Swat Valley. This region was called Switzerland in Asia. It is a matter of big sorrow that the area well known for its natural beauty and natural wealth for its scenery has come into the hands of brutal powers and their savage activities.

They are busy doing irreligious acts in the name of religion.

These brutes don’t want the people of the world know about their activities. That’s why journalists who are famous for their bold and honest opinions are disliked by them. So these people kill such journalists mercilessly.

Last year, these devilish powers killed four journalists in the valley. More recently, a fearless and honest journalist with Pakistan’s private TV Channel, Geo TV, Mr. Moosa Khan was killed just two days after the implementation of Sharia law. It is said that these uncivilized brutes, who talk of Islam and Sharia, fired 32 bullets into the body of Moosa Khan. Even after that, they were not satisfied, and they beheaded him. 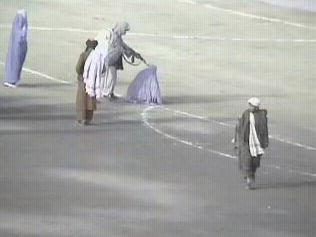 The savages who live in the uncivilized atmosphere hate the educated people and education. There is news that these enemies of humanity blew up 125 schools with bombs in the valley and set them on fire. They have the opinion that the educated people are aware and the aware people are not taken in by their superstitions. So they like neither schooling nor schools. Especially they don’t like the schooling of girls. These people think that the schooling of the Muslim girls is anti-Islamic.

These Taliban issued an order that stated that the girls of the valley can only marry Talibans. The people in this region are so horrified that about half a million people have left his place and migrated to somewhere else. Here anybody, who disobeyed the Talibani decree, is put to death without a hearing. The Talibani decrees are issued through illegal Radio FM. These orders are to be obeyed without any objection and disobedience means death.

Swat valley is a part of Pakistan. Slowly but surely, it has become controlled by the Taliban, from Afghanistan. These Talibani powers don’t want to limit themselves up to the Swat valley. But like other expansionary powers, they want to expand to and control Islamabad.

These protectors of the Talibani interests are making their place among the Pakistan people and have entry into Pakistan politics. That is why the world is worried over the implementation of Sharia law in Swat valley, there are people in Pakistan who are in favour of it. There was a time when Pakistan government was helpful in nurturing the Taliban. It used to consider the foes of humanity as friends and sympathizers of Islam.

When these powers were ruling over Afghanistan, the other countries of the world kept a distance from them. No other country recognied the Taliban government. Pakistan was the first.

These powers now are keen to get control over Pakistan. It is said they distributed pamphlets in Pakistan hinting about the 9/11 attacks even before the attack on the US, and posters favouring Sharia law were pasted on the walls. It is to be remembered that when NATO and the US started the war to uproot the Taliban in Afghanistan, the Taliban spokesman used to speak to the world media in a vulgar manner from Pakistan and not from Kandahar or Kabul.

Since the great defeat of the Taliban in Afghanistan, the implementation of Sharia Law in Swat valley in Pakistan is once again being considered as a victory by the Taliban. Obviously Pakistan is a co-partner of the US in its ‘War against Terror’ and has been taking huge sums of money from the US for this mission. But it is clear that Pakistan has bowed its knees before the Talibani powers. The Taliban is encouraged as a result of the implementation of the Sharia law in Swat. The US and allies are worried.

Richard Holbrooke, the special envoy for Afghanistan and Pakistan, appointed by President Obama, has gone to the point of saying that these powers are responsible for the November 26 attacks on Mumbai. And the Mumbai attack was done to infuriate India to attack Pakistan. But India played a mature role, showing tolerance and responsibility and didn’t let the enemies of humanity succeed.

US Secretary of State Hillary Clinton and American envoy Richard Holbrooke have directed Pakistan Foreign Minister to clear the air regarding this agreement with the Taliban. The US wants to know in detail, the circumstances that forced the Pakistan government to implement Sharia law in Swat valley.

Some South Asia political analysts, are of the view that the US may say it is worried over the implementation of Sharia law, but Pakistan could not have taken such a step without US approval. If that was so, there must be some far reaching American policy behind it. But the reality is, the attempt of strengthening the power of the Taliban by implementation of Sharia law may be a compulsion or because of a far reaching policy, but it will prove harmful.

Any alliance with the foes of humanity will harm humanity. These extremists, hard line religionists take the support of religion to carry on their unreasonable orders. The peace-loving Muslim world including the Pakistani people must stand fast against the Talibani attempts, at every level.