Since the cold-blooded murder of American journalist Daniel Pearl in 2002, dozens of Pakistani journalists have to lay down their lives just because they dared to speak the truth regarding the ground situation in Pakistan.

Not only this, Pak rulers can’t even tolerate any genuine criticism of their internal politics and disputes by the media. Readers must be to recall an incident during the last days of Parvez Musharraf at helm when he had an interview with the Geo TV. Musharraf asked the then editor Hamid Mir to remove some parts of the interview. But Mir put it on air unedited.

As the ‘controversial’ parts were being broadcast, the goons of Musharraf intruded into the office of the Geo TV and vandalized it. This suppression of media was being done by the head of the state himself. This incident shows how far the people at helm in Pakistan can go in concealing the truth. And this is the reason Pakistan is becoming notorious in the entire world. These circumstances have brought Pakistan on the verge of being declared a ‘terrorist state.’ 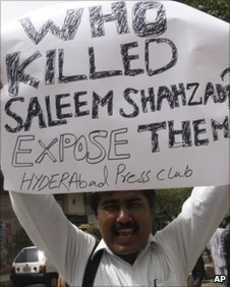 Threatening, kidnapping and murders of journalists are not new in Pakistan. This is as common as suicide attacks by the terrorists there. Anarchy, insecurity and terrorism are the norm in Pakistan today. Support of the Pak Army and the ISI has made terrorists so strong that they don’t even hesitate to strike the military installations of Pakistan. After looking at the dexterity with which the terrorists struck at Mehran Naval Base in Karachi recently, many Pak Army officials are now admitting that only army trained terrorists can carry out such a daring and well planned attack. Pakistan’s Special Services Group (SSG) commandoes managed to liberate the base from terrorists after a long combat of fifteen hours. Interestingly, SSG is said to be the Pak counterpart of the US Navy SEAL. In this attack, terrorists destroyed a huge cache of arms including two fighter jets.

Such kind of attacks proves that many current as well as former officers of the Pak Army are hand-in-gloves with terrorists. Active support and training to the terrorists by the army was exposed way back during 26/11 terror attack on Mumbai. But Pak rulers are still trying to hide this unholy nexus from the world. And if some honest and dedicated journalists dare to bring this truth to the fore, he has to pay the price. Exact happened with Syed Saleem Shahzad last month. Shahzad (40) was the Pak bureau chief of Asia Times Online. In an article, he just exposed the unholy nexus between the Pakistan Navy and Al Qaeda. Shahzad started getting threats just after publication of this article. And finally, he was kidnapped and killed. His corpse was found lying about 200 km away from Islamabad. There is a general consensus in the Pak media that Shahzad was killed by the ISI.

Some time ago, a TIME Magazine journalist did a scoop in which, he showed with the help of pictures and evidence, the luxury abode of India’s most wanted underworld don Dawood Ibrahim in Karachi. In that report, he also elaborated how Dawood enjoys the patronage of the ISI and the Pak Army. This report once again unmasked the true face of Pakistani establishment. Pak tyrants went berserk after the publication of this report. Ultimately, the ISI kidnapped that honest journalist and tortured him physically and mentally. He was threatened and even forced to write a ‘suicide note.’ Perturbed by this incident, he fled Pakistan and started living in America.

This culture of suppressing the voice of media is not at all healthy. It is dragging the people of Pakistan towards darkness and uncertainty. Such narrow and shortsighted policies of the Pak rulers have brought Pakistan to this pathetic state today. Now when incidents like Abbottabad happen, Pakistan invokes the claims of “sovereignty.” If Pakistani ruling class really cares about the nation’s sovereignty, then first of all it needs to severe all its ties with the terrorists, and respect those journalists and their reports who expose this unholy nexus and act upon those reports rather than kidnapping and killing those journalists in order to camouflage its misdeeds. If this trend persists, God save Pakistan.