At a press conference Nepal’s Energy Minister Dr. Prakash Sharan Mahat was enthusiastic about the plan. “This will allow us to exceed the target of 10,000 megawatts of electricity production set by the previous government,” he said. In addition to providing for Nepal’s energy needs for the foreseeable future, sale of excess power to neighboring India should bring in welcome foreign exchange according to Mahat.

Several other ministries co-championed the plan and were present at the announcement. Umakant Jha, Secretary of the Ministry of Irrigation, touted the agricultural benefits of the new dam and estimated that with it in place Nepal could attain food self-sufficiency in all but a few product categories. The Home Ministry also sponsored the proposal and spoke of its positive effects. “With all of Kathmandu underwater,” a Home Ministry spokesman said, “traffic management in the city will become much easier.”

A Senior Superintendent of Police said in response to questions that he expected much lower crime levels in Kathmandu once the city was flooded. “We are concerned about piracy on such a large lake,” he remarked, “but we are sure that crime will be reduced and that immoral activities in Kathmandu’s dance bars will be eliminated.”

The body of water filling the Kathmandu Valley will be called Lake Manjushri in honor of the Bodhisattva Manjushri who, legend says, drained the original lake by cutting the natural dam at the valley’s southern end with a magical sword. Nepalis believe that Manjushri wanted to make it easier for people to worship at Swayambhunath, a sacred site that was once an island in the lake. The Department of Antiquities was quick to note that water levels in Lake Manjushri would be maintained so that Swayambhunath would again become an island, and it said that plans for hydrofoil ferries to convey the faithful between the island and the mainland were already in place. 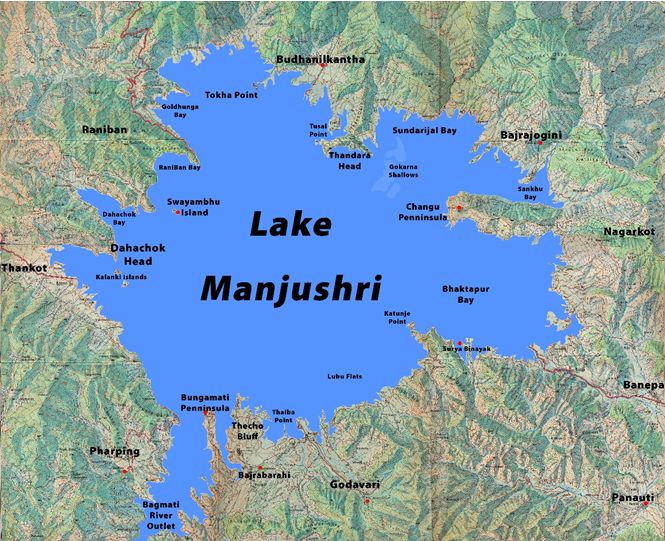 Reaction to the announcement from foreign missions in Nepal was generally positive. A spokesman for the US government said that it was studying plans to enclose its embassy in Kathmandu in a dome and to provide submarine services for embassy employees and visa applicants.

In an unexpected appearance, Prime Minister Madhav Kumar Nepal also addressed the press conference to announce that an all-party meeting had agreed that political party office-holders, senior bureaucrats and members of the Constituent Assembly would remain at their posts in Kathmandu while the valley was flooded. He said that this would “reduce the political influence of criminals and end impunity, allowing a fresh start for a New Nepal. No party other than mine could have conceived of such bold action to address the root cause of the nation’s problems.”