Athletes from over two hundred countries are taking part in one of the largest sporting events-the Olympic Games- in London as a manifestation of universal goodwill and fraternal relations amongst the nations and Peoples of the world. Millions of people throughout the world however continue to suffer and endure oppression at the hands of some of the states represented at the Games.

17 million people of Kashmir are one such glaring example of suffering and oppression at the hands of the Indian State. Over 700,000 Indian troops are actively deployed in the Indian held part of the forcibly divided state of Kashmir, who openly indulges in massive abuse of human rights, rapes, destruction of property and disappearance of innocent youths. 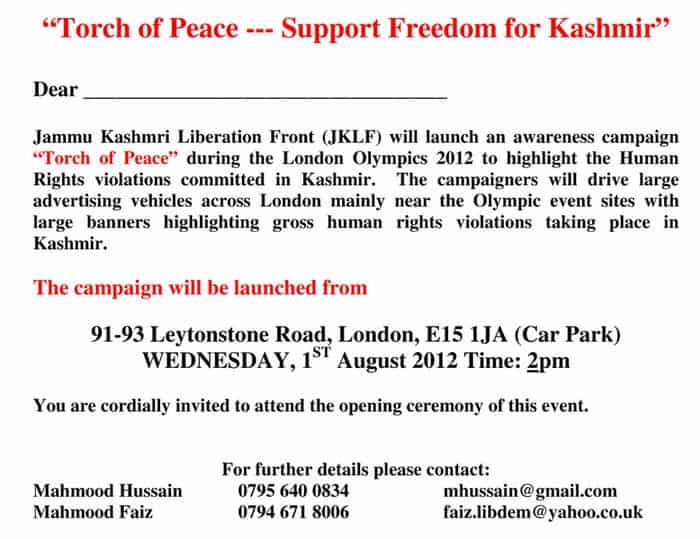 More recently, thousands of unmarked graves were discovered in many areas of Kashmir as reported by Amnesty International. Thousand of Kashmiri people are still languishing in prisons across India. The revelation of these unmarked graves has increased the fear of their whereabouts.

The Torch of Peace campaign is to highlight the plight of Kashmiri people (without disturbing the enjoyment of the games) and expose the state oppression by the huge occupying army of so called largest democracy in the world-India which continues to deny to the people of Jammu Kashmir, their internationally recognised, inherent and inalienable right of self determination.

The Torch of Peace is also to expose the indifference and failure of the big’ powers’ and the United Nations to secure the FREEDOM for the people of Kashmir which the world body promised the people of Jammu Kashmir.

The-launch of the Torch of Peace is a reminder to the World Conscience of the continued enslavement and subjugation and forced division of 17 million people and their land between India and Pakistan.