Diphu November 30: The high altitude 100 mega watt Karbi Langpi hydroelectric project, in Baithalangso, west Karbi Anglong, faces serious threats due to reduced water levels in the feeder source rivers. During peak monsoon season this year, the same project faced the threat of damage due to massive soil erosion in the catchment area of the main feeder.

Enormous chunks of top soil with green undergrowth and giant stones slid down into the river near the embankment since the beginning of the monsoon downpour in the catchment area. This caused the accretion of considerable quantities of biomass and debris near the flash point of the regulated torrent.

The project should produce one third of the 300 megawatts of hydro electricity produced in Assam state. 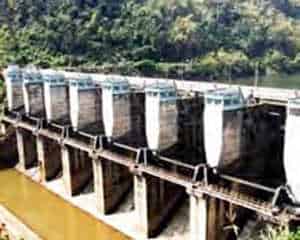 In the past 45 days, the project has produced only 50% power on average and one of the units has stopped production altogether.

Considering the seriousness of the situation, a high level team of Assam government officials led by Additional Chief Secretary visited the site recently. Deputy Commissioner of Karbi Anglong, Principal Secretary of Karbi Anglong Autonomous Council, SDO(C) Hamren also inspected the project site and viewed the catchment. The fact finding team expressed dissatisfaction at the faulty infrastructure of the project and directed the Chief Manager, Rajendra Deka to cope with the situation and take urgent measures to restore normal production.

According to people in the locality, considerable deforestation in the higher ridges where the principal river Karbi Langpi is revived perennially has left much of the area barren. In addition, the forest department (Hamren Division) did not do any customized work while taking up the large scale plantation (in record actually) in the river catchment before actual commissioning of the project.

Crores of rupees were allocated by the power sector to the forest department, but they did not use the money for the intended purpose. Neither did the department undertake any conservation measures to protect the existing natural forest cover.

Although the project authority is attempting to prevent wearing down of soil with bamboo guard walls and sand bags, they have found the effort to be more counterproductive than of help so far, according to a project officer.