In a bizarre and weird incident, former national javelin champion Debjani Bora, a mother of three children, wedded to Hiteswar Medhi a humble agriculturist, was subjected to inhuman torture and mental tormenting by a gang of antisocials who claim to be associated with Namghar ( Vaisnava Assamese place of worship ). The incident took place at her native village Saracani located in Dokmoka of Assam’s Karbi Anglong district. The gang indicted her to be a witch or Daini.

The eccentric group of villagers took her to the village place of worship (Namghar) gagged and bound, they wrapped her with a fishing net and hauled her to the centre of the village at around 1.00 PM and repeatedly thrashed her with canes and sharp weapons in the presence of hundreds of villagers. 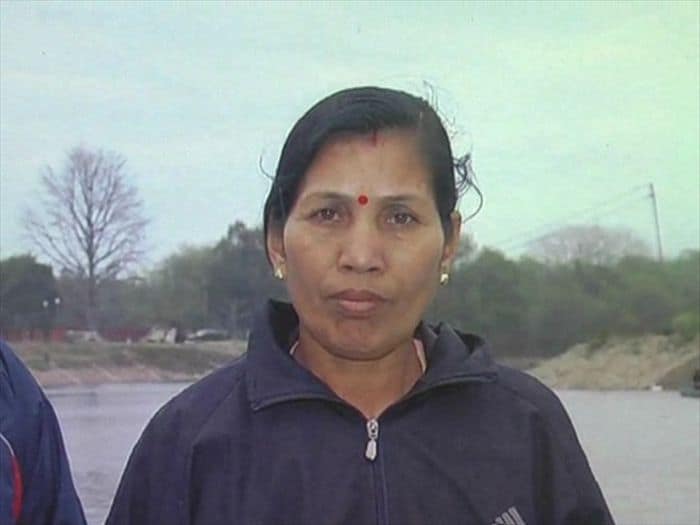 All through the physical torture, one Radha Laskar and Biswa Ram Medhi performed voodoo enchantments claiming to purify her from the ill influence of evil spirits. After enduring agony for hours, she was unconscious and bleeding profoundly from her wounds. Her helpless husband and few family members later rescued her and admitted her to the Dokmoka health centre. According to information she is responding to treatment.

Dokmoka police have arrested Radha Laskar and Biswa Ram Medhi today under section 120(B)/143/354/325 of IPC, and case no. 64/2014 has been registered. Howraghat locality in eastern Karbi Anglong is known for the issue of witch hunting. A few months earlier, CBI had to intervene in a similar case where none other then Assam Chief Minister Tarun Gogoi’s cabinet minister Khorsing Engti is alleged to be involved. In this case Dokmoka police suspect personal enmity with the family.

Both of the arrested were produced before a magistrate today at Diphu court and were remanded to police custody. A statement by Debjani Bora was also recorded by the trying judge; police are expected to file the charge sheet to the court for legal proceedings.

According to some commonsense people in the village, the practice of witchcraft is an unfounded and speculative conviction of a section of religious fanatics. Apparently, a group of villagers instigated the fanatic elements to perpetuate inhuman torture particularly against women to settle their personal score. In the most egregious cases, the victim is killed either by burning alive or by other means. In some cases a whole family is targeted.

“Social organizations and women society can play a vital role to generate awareness against this community nuisance which has already taken its toll in Assam, stringent low is also necessary to curb the activity of the religious touts” Sanju Bora, a renowned Karbi Anglong journalist said.