Poets honoring one of their own: Walking the streets with Bengali poets in Dhaka, paying tribute to Rabindranath Tagore.

I saw a movie by Satyajit Ray named “Charulata” (“The Lonely Wife”) written by Rabindranath Tagore. I was very much impressed with this popular movie. It stayed on my mind. In Kathmandu, it is not easy to have an environment to freely talk about movies or poetry. My grandfather, who is always concentrated on the local newspaper, will call in a loud voice and gather the villagers if he knows that I am talking about those two topics. Therefore, I keep these matters of movies and poetry inside my heart, while gazing at the moon in the sky through the window. My mother is keeping herself busy with household affairs and my father is working. My heart entertains the moon and dances peacefully while I think about literature.

I have read Ravindranath Tagore many times. I love his writing so much that I know it by heart. I especially like his one story “Home and the World.” It is about matters of the heart; it is so beautiful. The moment that I finished watching the movie “Charulata,” I believed that the movie had provided a little peace for me.

Speaking to my grandfather, I said, “Literature should be like the moon, which symbolizes light in the dark night – a symbol of regard.” He replied as if repeating dialogue from an old film, “Nepal’s situation is very bad” no jobs, no security, no good leaders” so you have to study and make money. Without making money, who will feed you? Your poems?”

He went on to ask, “Won’t you work and make money instead of writing poems?” I was shocked by the unexpected question from my grandfather. He continued, seriously, “How are you feeling about my questions?” I rejected his questions at once, saying, “I don’t like them.” Unable to be patient while looking at his sad face, I added, “I love poems, to an unlimited degree. For me, poems are immortal and we must immortalize them at any cost.” He did not like my answer and said, “Stop being a dreamer, be practical.” His voice contained pain while giving me this advice. I could say nothing, and so was quiet. 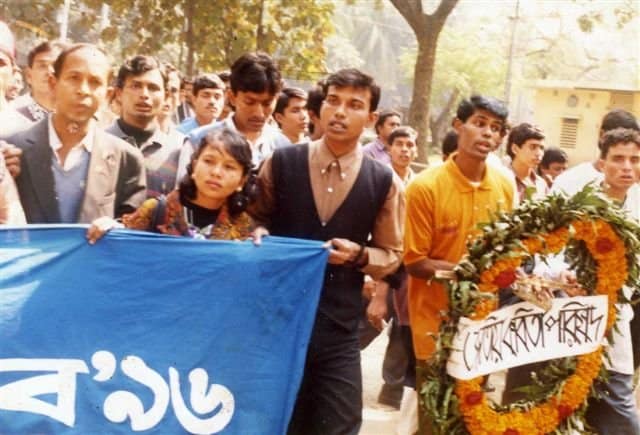 When I read a song written by Rabindranath Tagore, “Walk Alone,” the whole night passed in what seemed like a minute. Songs that touch us make life really beautiful.

I told my father, “I am going to Dhaka. It would bring me great pleasure to attend the Bengali poetry program there and show my appreciation to Rabindranath Tagore.” A Bangali, Indian poet, Tagore was born in Calcutta, India.

“It is not so easy for a young girl to travel away from home,” my father said, trying to talk me out of my proposal. I did not care and told him, “I will go. Nothing can stop me from going to Dhaka. Please, don’t say no.” My father stood dumbfounded. I have found that, many times, silence is a sign of permission, as when I am sharing my ideas and contributions with other poets.

Rabindranath Tagore’s poems have inspired me from inside my heart. He wrote to add more beauty to this beautiful life. All the great poets and writers of the world whose works I have gotten the chance to read” in Nepali, Hindi or English” all of them are my favorite writers.

While in Dhaka, I had some new experiences. I got to see life as a canvas and imagined the blue sky and the sea. The birds flew freely, as I composed a poem and listened to it. I was anxious to go meet Rabindranath Tagore, and I wrote a small poem for him:

Life accepts it as compulsory fact. Life stands you are the light you are my destination.

This article was originally published by United Press International, Asia.

Kamala is an editor for www.mediaforfreedom.com. Her specialties are in-depth reporting and writing stories on peace and anti-war issues, women, terrorism, democracy and development. Some of her publications include: Women’s Empowerment in South Asia, Nepal; Prevention of Trafficking in Women Through Media; Efforts to Prevent Trafficking in for Media Activism. She has also written two collections of stories.