Hundreds of gay Nepalis and their supporters turned out Thursday during the Gai Jatra festival for the largest gay pride demonstration ever here. Their procession started at the ancient palace square and passed through Kathmandu’s main shopping district accompanied by a marching band; rainbow balloons, umbrellas and face paints; and banners and signs proudly announcing who they were and calling for equal rights in a “new and inclusive Nepal.”

Spectators’ reactions ranged from confusion to amusement, but there was no hostility evident. Many people joined the procession as it passed, perhaps just to be part of the fun but in some cases obviously to support the marchers.

The 350-year-old festival of Gai Jatra was created by King Pratap Malla to assuage his wife’s grief at the death of their son. The king gave each of his sons a year on the throne as practice for their future royal duties. The youngest prince was thrown from his ceremonial elephant during the coronation and died. 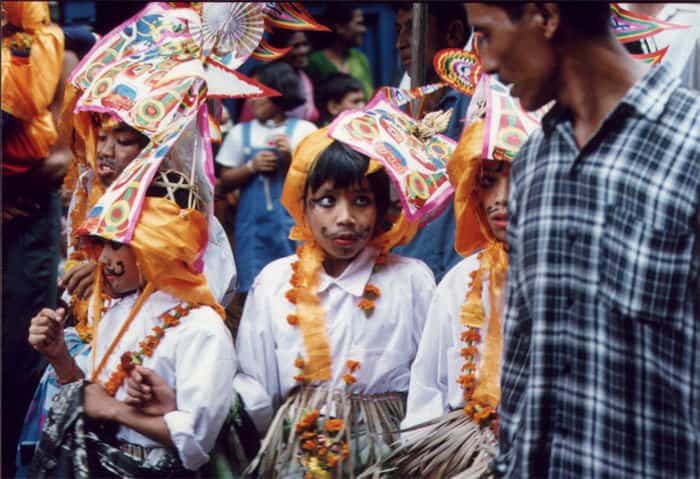 The king tried many things to bring the queen out of mourning, including building the lovely Rani Pokhari pool just outside of the medieval city walls, but none of them worked. Finally Pratap Malla ordered every household in the city that had been bereaved during the previous year to parade past the palace in the morning with their cows – the animal that in Hindu tradition leads the dead to heaven. When the queen saw that she was not alone in her sorrow she was somewhat consoled.

But the clever king had also decreed that the afternoon of that day should be devoted to merriment of all sorts, with nothing out-of-bounds. A second parade past the palace featured clowns, ribald songs and satirical performances. The queen laughed and put away her mourning clothes.

Every year since then Gai Jatra has featured a morning parade of boys leading cows or dressed as cows followed by an afternoon of outrageous behavior. Even during the most repressive times, newspapers printed biting satirical editions and lampooned government officials. Dressing in costume was also permitted, including men in drag. 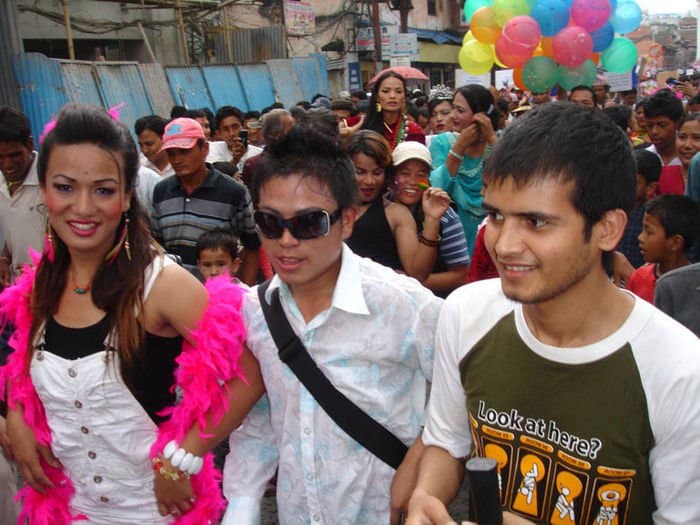 And that is why Nepal’s gay community has chosen this holiday for their own gay jatra. Homosexuality in Nepal is commonly considered to be the same thing as cross-dressing or being transgendered. Nepal’s only gay-rights group, the Blue Diamond Society, is primarily a support group for HIV-positive people and the transgendered, called metis here. The society’s leader, Sunil Pant, who is also a member of the Constituent Assembly, refers to gay Nepalis as a “third sex.”

Many of the marchers were men dressed in women’s clothing, but this year more than half of the group wore normal attire. That was markedly different from past festivals – the BDS has been marching since 2003 – and may signal a shift towards a more western style of gay-lib movement.

And there was vast media attention this year too: All the major newspapers and television stations had crews in attendance, and the march will be front-page news tomorrow. Organizers and supporters will count that as a major step forward for gay rights in Nepal.

John Child is The NewsBlaze Nepal Correspondent, a journalist in Kathmandu who writes about goings-on in and around Nepal and her neighbors.