Nepal will celebrate the diamond anniversary of the first ascent of Mount Everest Wednesday. Though neither of the first men to reach the top, Tenzing Norgay and Edmund Hillary, will attend – Tenzing died in 1986; Sir Edmund in 2008 – scores of other summiteers and record holders will.

The most recent record was for the ascent at the oldest age. Yuichiro Miura, 80, made his third ascent on May 23rd. Each of his previous ascents had also broken the age record: In 2003 when he was 70 and again in 2008 when he was 75. Miura also holds the record as the first person to ski down the mountain, 43 years ago.

This time too his record may not stand. The previous record holder, 81-year-old Nepali Min Bahadur Sherchan, is waiting at base camp now for an end-of-season chance to regain the record. But a powerful storm front over Nepal for the last several days may have closed the narrow weather window that makes up the annual climbing season on the mountain.

Miura says he will not climb again, even if Sherchan succeeds. “Three times is enough for me,” he told reporters. “There’s no greater feeling in life, but I’ve never felt this tired either.”

More than 630 other climbers have reached the summit so far this year according to unofficial tallies, probably breaking the record of 633 in 2007. Among them were the first double amputee and the first Saudi woman. A Sherpa climber, Purbi Tashi, made his 21st ascent, equaling Apa Sherpa’s record. A Qatari royal, a Nepali actress, and several family groups also claimed “firsts.”

Nine deaths (four Nepali Sherpas working on the mountain and five foreign climbers) marred the season, as did a fight high on the mountain between three European climbers and Sherpas. There was Comic Relief too, when British mountaineer Daniel Hughes donned a clown nose and made a video call to the BBC in London. Hughes was trying to raise a million pounds ($1.5 million) for charity.

A Government spokesman labeled Hughes’ call illegal, but no further statements have followed, and Hughes has already left Nepal. 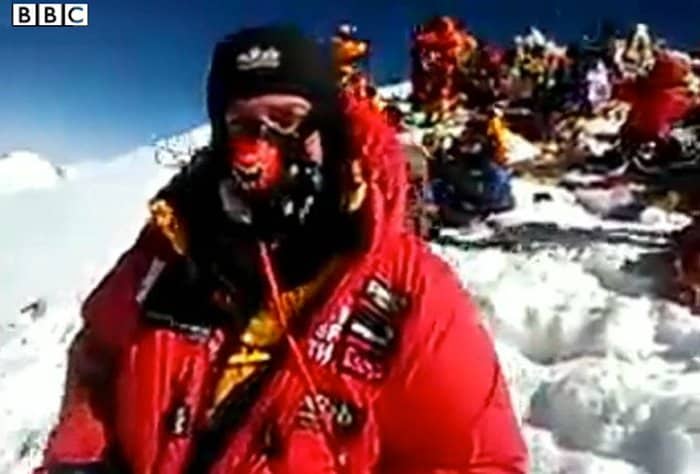 Queen Elizabeth too is celebrating a 60th anniversary this year. News of the May 29th ascent by Hillary and Tenzing, who were part of a British team, reached London on June 2, 1953, the day of her coronation. Hilary and expedition leader John Hunt were later knighted for the feat.