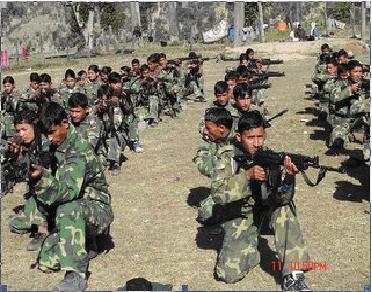 Even as the Maoists emphasize the “Political Warfare” line of operation in their people’s war approach – relying upon menace, extortion, and criminal activity in their effort to induce a nervous breakdown in an already dysfunctional system, their combatant forces train and flaunt their weapons. It is worth examining these weapons for what they tell us about the level to which the Maoists have advanced.

NepaliPerspectives asked noted small arms and insurgency expert, Dr Dave Spencer, to examine some typical photos presently making the rounds on the net. His assessment is below.

We provided him with this first typical photo (displayed above).

We see a main force company strength column conducting close order drill. It appears there are approximately 77 x guerrillas in formation (7 x columns of 11 x fighters each). Most of the fighters appear very young, no older than 20. All are clothed with what appear to be Chinese-made camouflage uniforms and most, but not all, wear similar canvas and rubber soft soled boots (slightly more militarized version of classic converse basketball shoes).

The guerrillas are armed with a mix of weapons. The most common is the Lee Enfield SMLE bolt action rifle in .303 caliber. About 1 in 15 are equipped with a grenade launching cup. Automatic weapons include British L1s (license-made copy of the Belgian FN FAL), Sterling 9mm submachineguns, Indian-made INSAS 5.56mm rifles, M16A2s, and Chinese Type 56-2s. There are also a small number of small caliber commercial hunting rifles. Support weapons include two 60mm mortars that appear homemade, and, if not, the bombs for them are; and 2 x Bren light machineguns converted to NATO 7.62x51mm.

Of the 77 x insurgents, about 10 are unarmed. Of the 67 remaining weapons, 2 are Brens, 2 are mortars, about 40 weapons are SMLEs, about 3 x SMLE with grenade launching cups. About 3 x weapons are commercial small caliber hunting rifles. The remaining 17 x weapons are automatics, including 2 x M16A2s, one with an M203 attachment, although no ammunition is in evidence. About 4 are equipped with Sterling SMGs; 1 is equipped with a Chinese Type 56-2, and the rest are about evenly divided between L1s and INSAS rifles.

All of these weapons, with the exception of the Chinese Type 56-2, are standard issue weapons in the Nepali security forces. However, with the exception of the Type 56-2 and the two M16A2s, the remaining weapons are also standard issue in India and can be acquired in fairly significant numbers everywhere the British had colonies in Asia. Significantly, in India most of these weapons are being gradually replaced with Russian AKMs and Indian made INSAS rifles. This means that there is a large surplus of these model weapons available for sale or donation.

Most important, however, is ammunition. The conclusion from the experience in Latin America is that successful insurgencies have to import large and steady quantities of ammunition from outside to maintain the tempo of their campaign. This question is far more important than the nature of the weapons themselves.

To illustrate: In El Salvador, the insurgents obtained most of their weapons from Vietnam and Cuba, which sent Western-manufactured weapons to be able to maintain the myth that they were not being supplied by communist countries. However, most of these weapons in fact were imported from communist countries. At the height of insurgent ascendance, only about 30% of the weapons were captured.

More importantly, the communist countries provided the steady flow of ammunition and explosives to keep the insurgent weapons firing. In the Cuban Revolution, most of the weapons were imported until the last six months of the revolution, when the government forces began to collapse. It is calculated that during this period about 90% of the weapons in insurgent hands were captured. Nevertheless, the insurgents had to import most of their ammunition.

It may be that the majority of weapons in the Maoist inventory have been captured from the Nepali government. However, this is unlikely given a lack of evidence that such has occurred. Therefore, the numbers are probably closer to 50% captured and 50% imported, plus or minus 10-20%. To hide what they import, the Maoists are probably careful generally to purchase weapons on the regional market of the same types as used by the security forces. Some exceptions do occur, such as the small numbers of Chinese Type 56-2s.

Where these are being acquired is a mystery, but there are many potential sellers in the region. Most of the weapons appear to be relatively old, so they could come from many sources. Clearly, these weapons are not merely accidents, as the ammunition to keep them operating has to be imported as well, and the weapons do appear operational.

Even if all the weapons in this photograph and others are captured, with the noted exceptions, the ammunition to keep them operating is almost assuredly not. Again, the difference between weak and strong insurgencies militarily is how consolidated and robust their ammunition supply chain is. This almost always involves an external source.

Dr. Spencer was also provided with the photos displayed at www.phalano.com (“Visit Nepal Year 007: Bring your SLR (guns) and SLR (cameras”), and at “Kevin Sites in the Hotzone – Meet the Rebels”

His assessment is as follows:

Photos taken of similar main force companies (to that above), at Kami Danda village in Kavre district on 14 Jul 06 and Ghumi, Shurkhet District on 16 Jul 06, show a slightly increased number of Type 56-2s and AKM automatic rifles. The type 56-2 is a Chinese copy of the AK-47. The AKM is the same as the AK-47 with a stamped steel receiver instead of the AK-47 milled receiver. This allows it to be manufactured more cheaply and in greater quantity. The other weapons and their mix are similar to the column photographed above.

These photos confirm the analysis above and indicate that this is fairly standard among main force columns. However, it may also indicate an increased importation of AK family weapons. If more than a coincidence, this may indicate a number of things.