With still no apparent solution to end the Syrian turmoil, the world is witnessing the worst humanitarian crisis in this generation.

In her remarks at a Security Council Stakeout on Syria in New York, the US Permanent Representative to the UN, Samantha Power, said evidence showed that that world has seen the images of emaciated and tortured Syrians, of dead and dying children, and of so much more.

“In Syria we are witnessing the worst humanitarian crisis we have seen in a generation.” – Ms. Power

Situation Getting Worse Every Day

According to Ms. Power, the situation has worsened in the last four months.

In October 2013, it was recorded that there were 6.8 million Syrians in need of assistance. Today, that number has increased tremendously, to 9.3 million, a rise of more than one-third.

At present, there are 6.5 million internally displaced persons with an increase of more than 50% compared to four months ago.

With the ongoing brutal onslaught of the Syrian regime against its people, from the previous recorded deaths of 100,000 in October 2013, it increased sharply to 136,000 deaths today.

In addition, since the Geneva II talks began, an estimated 5000 people have been killed.

Ms. Power, together with the Security Council and the international community have called upon the Assad regime to facilitate immediate humanitarian access and to alleviate the suffering of the Syrian people.

She highlighted that the international community should not have to take action in order for a leader to simply allow the delivery of food and humanitarian assistance to his people in need.

“It should be a primary responsibility of any government.” – Ms. Power 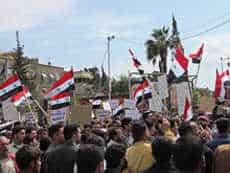 Given that that the Assad regime controls more than 80% of the besieged areas, the Security Council must take humanitarian action.

To respond to the worsening humanitarian crisis, the United States said it strongly supports the draft humanitarian resolution circulated to the Council this week. The US is still negotiating within the Council to ensure a final text that will make a real difference on the ground.

Ms. Power pressed for the Security Council to speak with a united voice demanding immediate, full humanitarian access to those in need, particularly in besieged areas and increased flows of assistance, including across borders.

US Responds To Humanitarian Crisis

According to Ms. Richard, the State Department and USAID are major funders of the top humanitarian organizations responding to the crisis in Syria and the region, providing over $1.3 billion in assistance to date.

The US government has the multi-faceted response that has been mounted by UN agencies and NGOs working with U.S. support, including the UN Refugee Agency (UNHCR), the World Food Program (WFP), the UN Children’s Fund (UNICEF) and the United Nations Relief and Works Agency for Palestine Refugees in the Near East (UNRWA). With the help of these agencies, food, clean water, shelter, medical care and other basic essentials are provided to the Syrian refugees.

In addition, the US provided over $30 million to help alleviate strains on the water and education systems. USAID built five new schools in northern Jordan and is expanding 67 existing schools.

On December 16, the UN issued new funding appeals for 2014 totaling $6.5 billion for 2014. The appeals will respond to the immediate humanitarian needs of those inside Syria and refugees in the region.

The violence in Syria, which began in March 2011 as a protest movement similar to those witnessed across the Middle East and North Africa, has claimed over 100,000 lives, mostly civilians, and displaced around 6.5 million, and 2 million of those are now outside Syria. The current estimate of deaths at the time of writing, range from 95,000 to 130,000.