Recent events in Syria are some of the most painful in modern history. Millions of people being displaced and the inaction seen from the international community have become major concerns for our consciences in the 21st century.

The ruthless massacre and displacement of the Syrian people are all rooted in an evil war directed by those sitting on the throne in Tehran. The Ayatollahs in Iran consider Syria their 35th province and the frontlines in the battle maintain their very existence. Thus, they are never willing to give up on the Bashar Assad regime. The regime believes if they lose the oil-rich province of Khuzestan in southwest Iran, their regime will not be toppled. However, the fall of Damascus will mean the inevitable fall of Tehran. 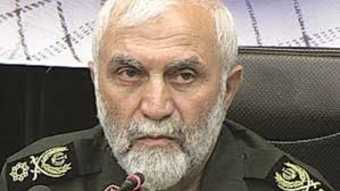 Hossein Hamedani a senior Revolutionary Guards (IRGC) commander was killed in Aleppo on October 7th along with a number of other IRGC commanders. Hamedani was the IRGC’s number two man in Syria as he was appointed by Qassem Suleimani – head of the Guards’ extra-territorial arm – as the “coordinator” of the Zeinabiun Brigade (consisting of Pakistani militias), the Fatemiun Brigade (Afghan militias), Iraqi jihadi groups and Iranian forces in Syria.

With a quick look at Hamedani’s biography one can come to understand the scope of Iran’s meddling in Syria, and how Tehran has set its frontlines outside its own borders.

Hamedani was a founding member of the Hamedan Corps in Kurdistan back in the early 1980s. He later served as Suleimani’s deputy in the Quds Force and the IRGC’s senior officer on the ground in Syria.

Down the road he was appointed as an advisor to the IRGC commander and for some time served as the commander of the IRGC corps stationed in Tehran missioned only to protect Tehran Province.

On 13 April 2011, the European Union blacklisted and sanctioned 32 Iranian officials, including Hossein Hamedani, for their role in widespread human rights violations against the Iranian people.

As commander of the IRGC corps in Tehran, Hamedani played a major role in the crackdown on protests following the controversial 2009 uprisings in the Iranian capital, according to the EU statement.

Hamedani was also one of the founders of the “Syria Bassij” force, a unit missioned to support the Assad regime and formed with logistics, training and arms support directly provided by Iran.

“Syria is fighting on behalf of Muslims against arrogance and terrorism. Syria is in the Islamic resistance camp and brothers with Iran. Today, our role is to back Syria and we must not cover-up the support provided to the Islamic revolution by Damascus,” he said on October 3, 2013, regarding the importance of Iran’s meddling in Syria. (Quds Force-associated ‘Tasnim’ news agency)

These remarks made by senior Iranian officials shed light on the dimension of Tehran’s meddling in the internal affairs of regional countries, including Syria.

“Without a doubt, Hamedani’s death will strengthen the will of the resistance front in Syria to uproot terrorism and Zionism,” said Iranian Defense Minister Hossein Dehghan.

“Hamedani tirelessly carried out his mission as an advisor with wisdom in the front against terrorism, extremism and occupation,” Iranian Foreign Minister Mohammad Javad Zarif said, after expressing his condolences to Iranian regime leader Ali Khamenei and IRGC chief Mohammad Ali Jafari.

The death of Hamedani and other IRGC commanders along with him, once again emphasizes this fact that the criminal war against the Syrian people is completely directed and led by Tehran and its senior IRGC commanders. Otherwise, the Syrian dictator would have fallen long ago, and we would not be witnessing the catastrophe rampaging in the Levant today.