Iran’s clerical regime may be losing its hold over the people and there is infighting within the government.

Despite Khamenei mobilizing the revolutionary guards and all governmental resources to shape the largest possible gathering on the occasion of February 11, the inception of the Islamic Republic, and in spite of threatening and enticing the people, especially schools and government employees, this state demonstration was largely ignored by the people.

In Tehran and cities throughout the country, the low participation was unprecedented. There was significantly less participation compared to previous years. Even in Azadi Square and the streets leading to it as the finishing site of the march to gather, as well as in Engelab and Azadi streets and Engelab and Firdausi squares as the main routes of the march, the crowd was quite small.

In many streets and districts of Tehran, government elements and the Basij pleaded with people from early morning to participate in the demonstration. In some districts, they said that during the demonstration lunch will be distributed. 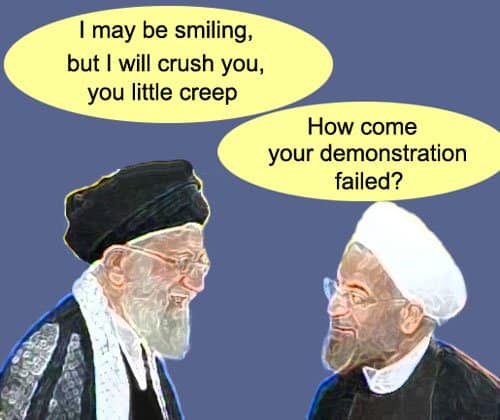 Along the demonstration route, a large number of pictures of Khomeini and Khamenei distributed by the IRGC and Basij forces were torn up by the people and scattered in the streets or thrown into garbage bins. To avoid the sight of this disgrace, regime officials quickly mobilized municipal workers to clean the torn pictures off the streets.

At least three times during his speech on February 8, Khamenei promised a great march on February 11 as a tool to terrorize the Iranian people domestically and to blackmail the international community.

In addition to this disgraceful defeat, the February 11 demonstration also showed scenes of antagonism between the regime’s internal feuding factions. In a speech, Rouhani accused those who oppose the negotiations with treason: “No treachery is greater than the treachery of the rear flank.” He also said, “Today, solely the enemies of this nation are against the negotiations.”

Reciprocally, Khamenei’s factions chanted slogans against Rouhani, Rafsanjani and the negotiations during the march. Khamenei’s faction accused Rouhani of “treason on the front line.” Vatan Emruz daily, the mouthpiece of this faction, described attempts by Rouhani and his foreign minister to seal a two-stage deal as: “If people are to know who the traitors are, then reminding the events should not be unpleasant to these gentlemen. Mr. Rouhani speaks of ‘treachery of the rear flank’ one must say that treachery is where a deal is sealed without the annulment of all sanctions.” (Vatan Emruz – February 12, 2015)

Things are not going well in Tehran.