The Weekly Standard reported on 27 February 2015 that documents released by the Obama administration that were recovered from Osama bin Laden’s compound in Pakistan indicate that al-Qaida had dealings with Iran.

The newly released files reveal that a top al-Qaida operative, Younis al-Mauritani, asked bin Laden’s permission to relocate to Iran in June 2010, where he would be based to plot attacks around the world. In fact al-Mauritani and some of the members associated with his plots received safe haven in Iran. In the memo to bin Laden, a top al-Qaida manager wrote, “Sheikh Younis is ready to move and travel.”

It adds, “The destination, in principle, is Iran, and he has with him 6 to 8 brothers that he chose.”

The Treasury and State Departments had also exposed a formerly “secret deal” between the Iranian regime and al-Qaida, according to the Standard. The arrangement allowed the terrorist group a base from which to dispatch terrorists around the world.

“In late 1991 or 1992, discussions in Sudan between al Qaeda and Iranian operatives led to an informal agreement to cooperate in providing support-even if only training-for actions carried out primarily against Israel and the United States. Not long afterward, senior al Qaeda operatives and trainers travelled to Iran to receive training in explosives. In the fall of 1993, another such delegation went to the Bekaa Valley in Lebanon for further training in explosives as well as in intelligence and security. … The relationship between al Qaeda and Iran demonstrated that Sunni-Shia divisions did not necessarily pose an insurmountable barrier to cooperation in terrorist operations. … In sum, there is strong evidence that Iran facilitated the transit of al Qaeda members into and out of Afghanistan before 9/11, and that some of these were future 9/11 hijackers. There is also circumstantial evidence that senior Hezbollah operatives were closely tracking the travel of some of these future muscle hijackers into Iran in November 2000.”

Exclusively-obtained US court documents have exposed a link between Iran and the Sept. 11, 2001 terrorist attacks.

The documents, published Mid-March 2016 by pan-Arab newspaper Asharq al-Awsat, revealed that a New York District Court ordered Iran to pay more than $10.5 billion in damages to families of people killed in the attacks and to a group of insurers.

According to the newspaper, “allegations were built on information collected by military men who conducted interrogations with US detainees on Iranian affiliation with al-Qaeda.”

The evidence from six court documents obtained by the newspaper points to Iran and Lebanese Shiite group Hezbollah as being involved “first-hand” in the 9/11 terrorist attacks that killed thousands of US citizens.

Judge George Daniels found that Iran had failed to defend claims that it aided the Sept. 11 hijackers and was therefore liable for damages tied to the attacks, according to Bloomberg.

The lawsuit detailed 274 instances of Iran’s alleged role in terror-funding and its cooperation with terror organizations such as al-Qaeda.

Iran is the strongest and closest ally of the beleaguered Syrian President Bashar al Assad. By extension and association Iran and Assad are colluding with ISIS.

In June 2015 according to media reports “Assad regime forces abandoned the city of Palmyra and allowed ISIS to take it over unopposed.” The recent liberation of Palmyra was pre-orchestrated. The ISIS fighters were given enough time to escape. A pro regime website (Syrian Perspective) quoted General Ali Abdullah Ayyoob, Chief of the Syrian General Staff as saying Sunday 3rd April: “the rats (ISIS men) inside were finally given the go-ahead to withdraw to Al-Sukhna, Al-Raqqa and Deir Ezzor. This morning at 5:00 a.m., the SAA had confirmation from sources inside the city that the piece-meal escape was taking place. The Syrian high command ordered troops to stand down until the last rodent had left.”

On 6th February 2015 the US Embassy in Syria accused the regime of supporting ISIS advance on Syria’s largest city, Aleppo. The Embassy tweeted:

“Reports indicate that the regime is making air-strikes in support of ISIL’s advance on Aleppo, aiding extremists against Syrian population,” said the post.

In a string of tweets, the U.S. embassy condemned Assad’s actions, saying he “will never be an effective counterterrorism partner.” Embassy operations have been suspended since 2012, but the Twitter account is still active.

In March 2015 The FT reported “A Syrian businessman responsible for orchestrating millions of dollars’ worth of secret oil and gas trades between the Assad government and its supposed sworn enemy, ISIS is among 13 individuals and organizations hit with sweeping new economic sanctions by the EU.”

On 12th March 2016 News agencies reported that the Syrian government and its military intelligence supported al-Qaeda’s suicide bombings of hotels in the Jordanian capital Amman in 2005, a US federal court has ruled.

The court ruled that the state and its spies provided “crucial material support” that allowed four al-Qaeda in Iraq operatives to kill 57 people and wound 110 in near-simultaneous attacks on three hotels. The support included training, finances and safe passage, according to court documents.

And also in Iraq:

The US court also ruled that Syria aided the rise of al-Qaeda in Iraq, and that “without Syria, there would not have been a developed foreign fighter transit pipeline and an advanced funding network underwriting terrorist operations in Iraq, Jordan and elsewhere throughout the region.” 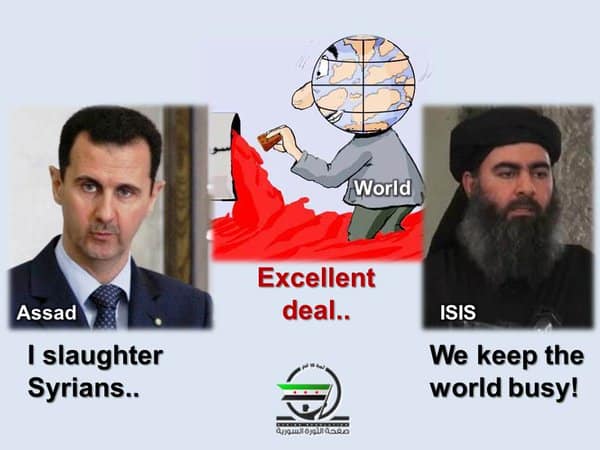 “Syrian support for this network led to the deaths of hundreds of Americans in Iraq and bolstered a terrorist network that killed dozens of Jordanians on 9 November 2005.”

The US court statement came earlier this month when US District Court Judge Beryl Howell ruled that the Syrian government and military intelligence owed $347mn to the families of two American victims who brought the lawsuit.

“There is broad and deep evidence of senior Syrian officials supporting and sponsoring al-Qaeda in Iraq and Zarqawi,” said FR Jenkins, a Portland based lawyer acting on behalf of the families. “This was coming from the highest levels in the regime.”