Actor, writer, producer, director, rapper, father – : “reigning Renaissance king” could be a good term to describe the one and only Ice Cube. Coming of age in 1980s Los Angeles, Cube experienced the roiling stew of street knowledge, sports fanaticism, and social injustice in a city at the forefront of hip-hop’s expansion from local sound to global phenomenon.

Twenty-seven years after N.W.Ahttp://www.nwaworld.com/http://www.nwaworld.com/ – the group Cube co-founded with Dr. Dre, Eazy-E, MC Ren, and DJ Yella – released their archetypal gangsta rap masterpiece Straight Outta Compton, the group’s 2016 induction into the Rock & Roll Hall of Fame, with an introductory speech by their spiritual heir Kendrick Lamar, is a mark of how far Cube has come.

Cube made his feature film debut in director John Singleton’s 1991 hit Boyz n the Hood. From that auspicious beginning, he has become one of the most bankable, likeable names in Hollywood as a writer, actor, and producer. His production company, Cube Vision, founded in 1995, has now passed two decades making memorable films. He has been part of films that have cumulatively grossed over $1 billion at the box office.

The N.W.A biopic Straight Outta Compton took in box-office receipts of over $200 million worldwide. Cube’s successful film franchises also include the Friday, Are We There Yet?, Ride Along, and Barbershop franchises.

Deon Cole plays the hilarious co-worker Charlie, a fan-favorite on ABC’s hit comedy Black-ish. Deon is also one of the lead roles in the TBS series Angie Tribeca. And he continues to be a featured guest correspondent on Conan, for which he was also a two-time Emmy nominated writer.

In the interview below, Cube and Deon discuss co-starring in Barbershop: The Next Cut as Calvin and Dante.

Kam Williams: Hi Cube and Deon, thanks for the interview.

Deon Cole: How you doing?

KW: Great! I really loved the film and how you addressed the issue of the murder rate in Chicago.

IC: Yeah, we really wanted to make sure that our movie wasn’t all laughs and jokes, and that we were dealing with what a real barbershop has to deal with. Sometimes, when you want to laugh, reality steps in. So, we were happy to be able to push it.

KW: How were you able to walk that fine line between humor and the serious material?

IC: I think [director] Malcolm Lee is a real master at being able to make you laugh while bringing serious subject-matter, so the movie doesn’t hinge on silliness, but on real life. We were lucky to get him, and he pulled it off pretty brilliantly.

KW: How hard was it trying to reassemble the original cast?

IC: It was easy for the ones that came back, and hard for the ones that didn’t. [Laughs] We tried to get everybody back. We got most of the key players, and I was happy to add Common and J.B. Smoove. They were great adds. And Regina Hall was great, too. So, it all felt right.

KW: And Nicki Minaj was larger than life.

IC: Yeah, without a doubt. She plays a great character, and I think people are going to dig her acting skills.

KW: Did you have any trouble balancing egos with so many big names on the set?

IC: No, people came with the right spirit. I think that my “Let’s get it done! Let’s have fun! Let’s make a great movie!” attitude helped. I rarely have problems on my movies with egos and attitudes. And that’s how it was with this movie. You just respect boundaries and get down and do your work.

KW: Deon, you were quite the scene stealer every time you appeared in the film.

DC: Is that what it’s called? I’m gonna take that. [Laughs]

KW: Did you base your character on anybody?

DC: Yeah, real people I know that be in a shop like that. No matter what barbershop you go to, there’s always that guy who’s just hanging around and doesn’t do much, but knows everything that’s going on in the community.

KW: What message do you think people will take away from?

IC: To me, the message is community, that you can make a difference, and that you can’t run from your problems and issues and move to another neighborhood. We have to step up as adults and try to guide our youth. I think those are some of the universal messages in it, along with a father trying to get his son off the streets and on the right path. .

KW: Have you shown it to folks in Chicago yet?

IC: Yeah, they loved it! We went there first. We had to get them to sign off on it first. We wanted them to embrace it, because this was a movie done to uplift spirits.

KW: Harriet Pakula-Teweles asks: With so many classic films being redone, is there a remake you’d like to star in?

IC: I haven’t really thought about it. At one point, we were think about adapting the TV show Welcome Back, Kotter, but as a serious movie about a teacher in the ‘hood with some real “Sweathogs.” But that fell through. It’s all good.

KW: Ling-Ju Yen asks: What is your earliest childhood memory?

DC: Trying to be like my uncle, because I was an only child. He and my cousins were everything to me.

IC: I’m not sure, because most of my memories are stimulated by pictures. So, I don’t know what’s my first real memory. When you’re little, you’re always looking forward to days that are special, like Christmas, birthdays, the Fourth of July, and family gatherings. But I can’t pinpoint my earliest memory.

KW: Larry Greenberg asks: Do you have a favorite movie monster?

IC: I love Godzilla, but my favorite was on this TV Show, Johnny Sokko and His Flying Robot. I used to love the idea of having a giant robot under my control. That was like a dream come true for a kid.

IC: I care about what I look like on the red carpet.

DC: Yeah, man, you got to be more together on the red carpet.

KW: The Anthony Mackie question: Is there anything that you promised yourself you’d do if you became famous, that you still haven’t done yet?

IC: I still want to put together bigger and better programs to work with the community. I still think I could do better on that end.

KW: Finally, what’s in your wallet?

IC: Credit cards, business cards from some people I’m probably not going to call, and my driver’s license. Deon probably has an old condom in his.

KW: Thanks again for the time, Cube and Deon, and best of luck with the film. .

Check out the Barbershop: The Next Cut Film Review.

Watch the Barbershop: The Next Cut trailer: 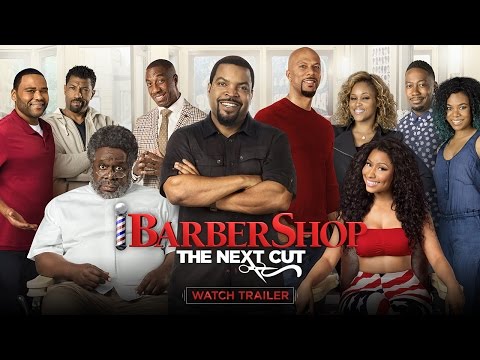