In a February 10, 2015 BBC article, Bashar al-Assad had the audacity to say, “I know about the army. They use bullets, missiles and bombs. I haven’t heard of the army using barrels, or maybe cooking pots.” Assad went on to say that the story of barrel bombs was a “childish story.” He also said that the US would not find a “moderate Muslim” opposition … that they had “evaporated.”

My contact Ammar, a young Syrian from Deir Ezzor who was previously a journalist with the FSA (now living in Turkey) said, “ISIS was brought to kill us in places that Assad regime could not get into.” Assad said that the moderates “evaporated.” Ammar told me, “They didn’t evaporate!” He said many left Syria when ISIS came and started their killing in such a horrible way. “Those people Assad said ‘evaporated’ went to Turkey and Europe.” I am sure some just wanted out, but I was also told by Ammar “so many are wanted and can’t risk even being in Syria for a minute.” Others didn’t evaporate, I was told “they are in Assad’s torture chambers.”

The very week before the BBC Interview, the Assad regime had already launched a bombing campaign that would result in a massacre of barbaric proportions in Douma, a town in the countryside of Damascus. The level of vengeance that Assad dropped on Douma is a clear testament to his “depraved indifference” to the crimes that he has been committing throughout Syria. However, this is especially true for the area of Douma and the entire Ghouta area, where the Assad regime has held the entire area under siege for more than two years.

According to US Legal, Depraved Indifference is defined as when conduct is “so wanton, so deficient in a moral sense of concern, so lacking in regard for life or lives of others and so blameworthy as to warrant the same criminal liability as that which the law imposes upon a person who intentionally causes a crime. Depraved indifference focuses on the risk created by the defendant’s conduct, not the injuries actually resulting.”

Assad’s barrel bombs and missiles weren’t enough to kill and damage Douma. Assad wanted to leave Douma smoldering and the people, including children, laying in buildings and in the streets burned beyond recognition. And so it was with the attack that the Assad Regime let loose on Douma. Syrian activists and people around the world took to twitter using the hashtag #DoumaExterminated. 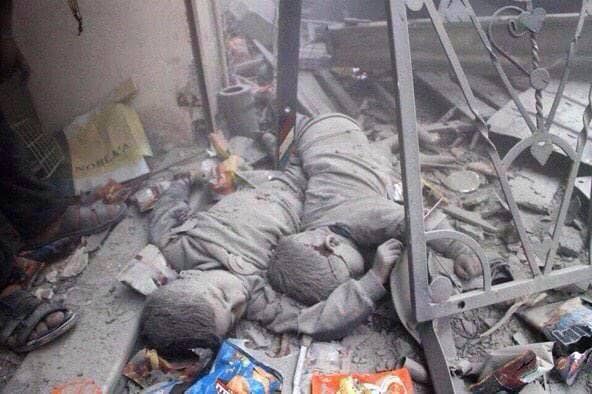 The Assad regime has not hesitated to use weapons, such as barrel bombs, starvation, chemical weapons, and a variety of both legal and non-legal weapons to “degrade and destroy” the moderate opposition or “terrorists” as he calls them. However, in fact Assad isn’t really worried anymore about who he is killing. According to the Violations Documentation Center in Syria (VDC), “the regime – almost daily – their large-scale, random, deliberate strikes on civilians and civilian infrastructures in the cities and towns of Syria, especially in the besieged parts of Eastern Ghouta.”

Syria Direct reported an opposition military source located in Douma, who requested anonymity, confirmed February 10, 2015, that the regime had used “umbrella-borne vacuum missiles” on February 9th. The missiles weighed 500kg and carry a 200kg explosive head, he added. Human Rights Watch wrote on February 2000, quoting a 1993 study by the US Defense Intelligence Agency, that the effect of vacuum missiles “against living targets is unique – and unpleasant … What kills is the pressure wave, and more importantly, the subsequent rarefaction [vacuum], which ruptures the lungs.” VDC states that in fact the Assad regime dropped four vacuum missiles on Douma.

In the following video, the Russian vacuum bomb is discussed. There are only two countries that possess the vacuum bomb technology – the United States and Russia. Syria Direct reported more than 200 Syrians including innocent women and children were massacred. Emergency personnel with the Unified Medical Office treated more than 1,000 wounded between February 5th – 10th, including various medical staff. Abu Adnan, a doctor and spokesman for the Unified Medical Office in Douma said, “The number of dead will surely climb as the crumbled buildings are carefully picked through to find more dead bodies, for it is now a search mission not a rescue mission.”

The Vacuum Bomb is as potent as an atomic explosion, but without radioactive fallout

It has long been known that Assad has been in partnership with Russia and Iran, certainly it has been no secret that Russia has supported the Assad regime both as a supplier of arms and as a close advisor. In fact, for the past three+ years, Russia has been known to speak on Syria’s behalf on matters of importance, including international matters. As the supplier of the vacuum bombs which has killed over 200, and wounded over 1000, is Russia culpable for the mass casualties in Douma?

Iran, Hezbollah and Iraqi Militia have also been heavily involved in most major battles within Syria at least within the last year. In fact, some say that it is Iran that is running the Syrian Arab Army, and they are bringing their own fighters to the war. The Syrian opposition have often retrieved the ID’s of Iranian officers from the dead in battle, and showed their ID’s on Facebook or YouTube as proof that Iran is in the fight. According to Syria Direct, pro-regime media outlets have reported during the week of February 10th that Iranian General Qasem Suleimani, who has a ruthless reputation, was in Syria “assisting” regime forces in the South. General Suleimani is the same Iranian operative General Petraeus once called “evil,” because of his well-documented role orchestrating attacks on U.S. servicemen [in Iraq].

To demonstrate the depth of this new Syrian Arab Army, “the Liwa al Iz” an FSA battalion, reported they ambushed a regime group near Deir Makir on February 11th and killed 40 Hezbollah and Iranian fighters. Another local media activist, Abu Faisal al-Huda wrote on Facebook on February 12th that FSA fighters had killed 140 members of the Assad regime’s “Al-Fatimiyun” brigade in Deir al-Adas, made up of Afghan, Iraqi and Iranian fighters. These are “foreign fighters brought to Syria by Iran to fight for the Assad Regime.”

Even so, there are tens of thousands of Syrians who are fighting against the Assad regime and the most recent attack on Douma has coalesced them, if they weren’t already. They know what they need to do to save Syria and eject terrorists from their midst; that is to get rid of Assad (whatever that means). Of course, this is easier said than done as the Free Syrian Army is severely under-armed. This has been the case since the fight began and has not changed. However, if the war could be won on heart or for love of country the Syrian Opposition would have it won hands down.

There are plenty of people in Syria who would say Assad should stand trial for his war crimes, but no one would feel bad if he suffered a death the way that he has brought on more than 25,000 children in Syria.

The US has said that they want to train the “moderate” Free Syrian Army to fight against ISIS first which Washington considers the eminent threat in the region. However, according to Nehad Ismail the eminent threat in the region has been and still is Iran and Assad. Iran and Assad are paying the region’s terrorist organizations to exist, or at the very least giving them license to exist. After Douma, it will be a hard sell to get FSA fighters to leave Syria to be trained somewhere else when they know that Assad is raining terror on Syria – and colluding with other terrorist groups to help his terror reign. If the International Community wants to stop terrorism, they must stop the blood bath that is going on in Syria – and to stop the Syrian blood bath, Assad must be caged. 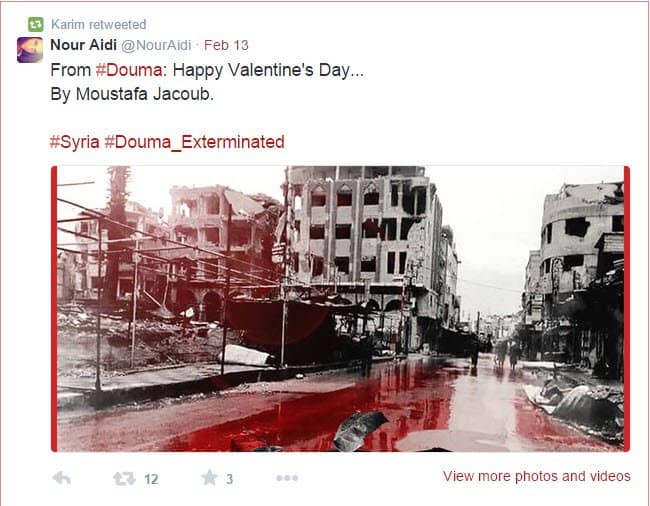 Is There A Political Solution To The “Syria Situation”?

Some analysts have repeatedly said that Assad is the West’s best hope to win the war against ISIS in Syria. Others have said “Assad has taken a calculated risk that he can continue his monstrous behavior against the Syrian population and end up an ally with Western nations anyway.” What would any Western country gain by negotiating with Assad, who has proven to be a liar, a key supporter of terrorism, and a killer of women and children? The answer to that question is really moot because when asked if he wants to be an ally with the West, Bashar al-Assad told BBC, “No, definitely we cannot and we don’t have the will and we don’t want, for one simple reason: because we cannot be [in] alliance with the country who support the terrorism [the Opposition] … because we are fighting the terrorism.”

So What Is The Hidden Agenda?

The Iranian Mullahs and Assad made a pact between Iran and their “friends” to take on their worst enemy … Israel … from Syria, which is why Assad has essentially allowed his country to become a devastated piece of real estate.

Tell Us What You Think

Bashar al-Assad had the audacity to say, “I know about the army. They use bullets, missiles and bombs. I haven’t heard of the army using barrels, or maybe, cooking pots.” The BBC interviewer said, “It was a flippant response; the mention of cooking pots was either callousness, an awkward attempt at humor, or a sign that Mr Assad has become so disconnected from what is happening that he feels overwhelmed.”

The News has been giving Bashar al-Assad a lot of personal press lately, which is certainly good for their ratings. I doubt it did any good for the Syrian Government. The question is: did any other government change their policy after hearing what Assad had to say? What didn’t happen in all fairness on BBC or the other interviews is there wasn’t an opportunity for Syrians to “Have your say.”

So here is your chance, if you want to take it. At the link below, you will be taken to a survey where you can state your opinion about Bashar al-Assad. Do you feel Bashar al-Assad is “disconnected” or “overwhelmed”?

If you want to have your say, take the survey and tell us what you think. We will publish the results of the survey in 30 days.