Thirteen bound bodies were recovered in the area of Assukar, 50 kilometres east of the city of Deir Ez-Zor, in eastern Syria, just days after UN observers confirmed the killing of over 100 men, women and children in the village of Houla.

Reports say all the bodies had their hands tied behind their backs and some appear to have been shot in the head from a short distance.

The head of the United Nations Supervision Mission in Syria (UNSMIS) Major-General Robert Mood said he was “deeply disturbed” after the discovery of more bodies.

He calls on all parties to exercise restraint and end the cycle violence for the sake of Syria and the Syrian people.

Meanwhile, the Deputy Joint Special Envoy of the UN and the Arab League for the Syrian Crisis, Jean-Marie Guehenno, today stressed that member States and the Human Rights Council discuss the situation in Syria.

“Particularly on the Houla massacre, it’s important that the truth, the facts be established in a way that nobody can challenge.”-Mr. Guehenno

He notes that only political negotiations, as envisioned in the six-point plan, can restore genuine peace and stability to the country.

The Syrian regime accepted Annan’s UN and Arab League sponsored six-point plan on 27th March 2012. The cease-fire plan for Syria was endorsed by the United States and other Security Council members because it could win support from Russia and China, which have so far blocked any condemnation of the Assad regime or any steps to deter the regime.

Massacre in Syria’s Houla village in the early hours of 26th of May has reportedly killed 108 civilians, including over 30 children.

Reports say artillery and tank shells were fired in the Syrian village killing hundreds of civilians.

The violence took place in and around the town of Houla, near Homs, after an anti-government protest.

The Security Council and the international community voiced condemnation of the recent massacre of men, women and children in Syria.

Just days after the Syrian massacre of men, women and children that has sparked widespread condemnation, the Joint Special Envoy of the United Nations and the League of Arab States Kofi Annan arrived in Damascus for talks with senior leaders, particularly President Bashar al-Assad and range of other actors.

In a meeting with the Syrian President, Kofi Annan urged the Syrian leader to take “bold steps” to stop the violence and release detainees.

Mr. Annan also conveyed frankly “the grave concern of the international community about the violence in Syria,” and, in particular, the events in Houla over the weekend.

Since the protests began on 26th January this year, the Assad regime’s violent response has lead to the death of more than 9,000 people. Many more have been injured, and thousands of protesters have been detained. 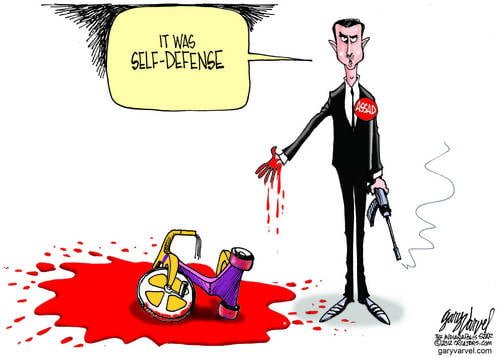