Heavy flooding caused by heavy rains has killed at least 150 people in 25 provinces in Iran. The deadly flood was made worse by previous actions of the IRGC and government officials.

“70% of the city of Aqqala is under water,” said governor Amangaldi Zamir. Aqqala is the capital of a county in Golestan province near the Turkmenistan border.

“The scale of the areas affected by the disaster is a serious obstacle to the speed and effectiveness of relief efforts.” Zamir’s comments were reported by the official news agency, Irna. 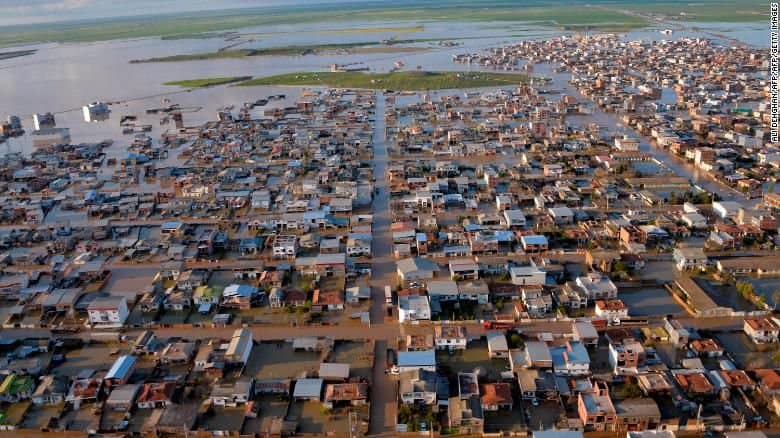 While heavy floods have devastated several regions in Iran and the people cannot hold back their anger at the lack of relief from the government. They are also angry with the role of the authorities in destroying the country’s infrastructure. This has greatly contributed to worsening the consequences of this natural disaster. The government also mobilized Revolutionary Guards (IRGC) and other repressive groups to prevent popular protest movements, rather than rescuing the affected population. At the same time, the regime is trying to hide the real number of victims.

The Deputy Commander of the State Security Forces, IRGC General Ayoub Soleimani, said today: “Ensuring security is our most important task in the devastated areas. The deployment of fixed and mobile patrols, with the collaboration of Bassij (militia) and IRGC, as well as the installation of checkpoints in many places, are measures that must be taken with all the necessary means to prevent crimes and possible damage.”

Mrs. Maryam Rajavi, president elect of the Iranian Resistance tweeted: “By destruction of the environment, and irregular construction of roads and buildings, the regime’s leaders and the IRGC have ruined the traditional barriers to flash floods, causing devastating flooding of cities and villages.”

By destruction of the environment, and irregular construction of roads and buildings, the regime’s leaders and the IRGC have ruined the traditional barriers to flash floods, causing devastating flooding of cities and villages. #Iran#IranFlood

Ms. Rajavi affirmed that the mullahs’ regime and its corrupt leaders as well as its Pasdaran Army (IRGC) have intensified to the utmost the effects of this destructive flood through the destruction of the environment. They have rendered the Iranian cities and villages to ruins by plundering the people’s belongings and wasting them in projects of repression, terrorism and warmongering. In addition they pursued anti-Iranian nuclear and missile programs, depriving the people of the minimum infrastructure to defend against natural disasters like earthquakes and floods.

“After the disastrous floods, too, they are only working to prevent popular protests and preserve their shameful rule,” Mrs. Rajavi said.

Rather than sending aid to Iran Flood victims, the government dispatched BTR armored vehicles to the flood-hit areas. Deputy Commander of Iran’s police said that their main priority was to “uphold security.” So they are there to quell any anti-government protests.

Some people find this hard to believe. Instead of sending aid to IranFlood victims, the Iranian regime sent tanks into the city of Shiraz to quell any anti-government protests that may occur as a result of their inaction towards helping those affected by the flood.

Regime authorities dispatching BTR armored vehicles to flood-hit areas is a clear indication of the mullahs’ utter fear of possible protests erupting after today’s catastrophe. In Kordkoy city in Golestan province, IRGC members set up a checkpoint and forced those who wanted to help the people in Agh-Ghala to wear IRGC vests and fix the IRGC flag on their vehicles.

There is no official aid, but the people and the courageous youths in resistance units in cities, went to the flood-stricken areas, to help their fellow countrymen.

In all other countries, the national army and guards are sent to help people in flooding or other natural disasters. In Iran, the police, the Basij and IRGC are sent to make sure people don’t start protesting the conditions! That is why the resistance units decided to interfere and help the flood-hit people. 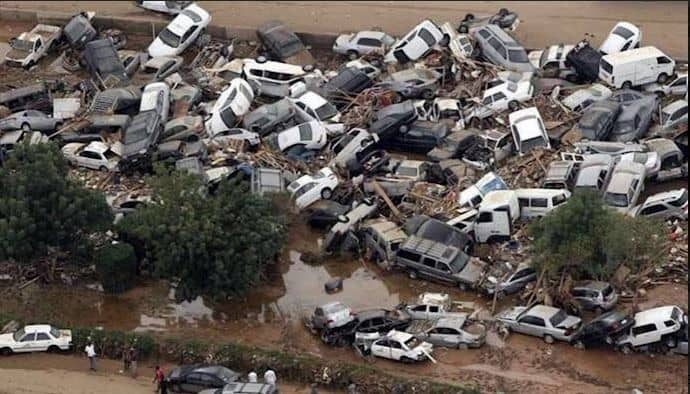 Today, heavy rain and strong winds have caused massive floods in most Iranian southern and western provinces. In Shiraz, part of the city was flooded, including the Ghoran Gate and the Vakil Bazaar, located in the city’s historic center, causing many casualties. As the regime advances the figure of 17 killed, it is estimated that the actual number of victims is much larger and increases every hour. The power of the torrents was so much that hundreds of vehicles were washed away.

The obvious negligence of officials has made mullahs’ Member of Parliament Kouroch Karampour say that those responsible for the mismanagement of the crisis must be brought to justice. 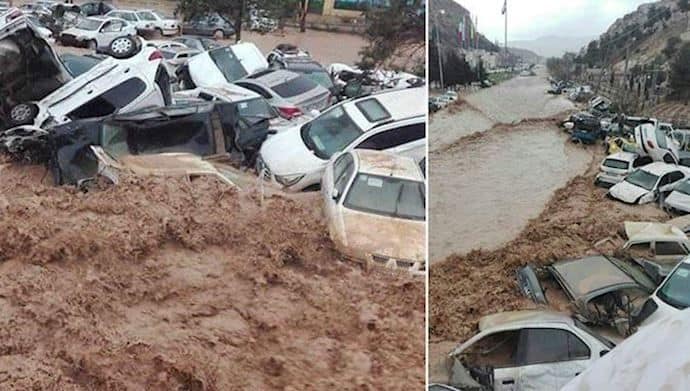 This is not the first time that Shiraz faced heavy rainfall. However, in recent years, the non-regulatory construction of roads and buildings by the IRGC and other regime bodies have resulted in obstructing the traditional network of rainwater. That network protected the city for hundreds of years. But the recent changes have allowed the overflow of water through the main gate of the city. 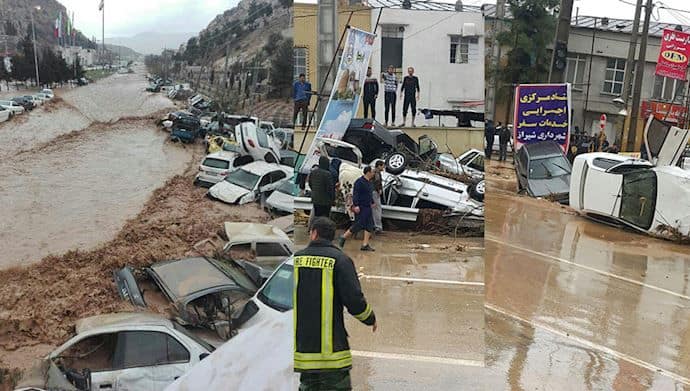