Last weekend was marked with an annual ceremony for the Iranian democratic movement committed to a regime change in Iran. At least 3,000 Mujahedeen Organization members inaugurated a newly built “city.” Ashraf 3, the new city is located near Manza, 30 km from Tirana in Albania.

Some dozens of senior officials from Arab countries and also from countries from both sides of the Atlantic, participated in a series of ceremonies to support the Iranian Resistance for a democratic change.

Maryam Rajavi, the President-elect of the National Council for the Resistance of Iran (NCRI), vowed that Iran is near a historical turn. She said that the victory of the people and Iranian resistance against the theocratic regime is near.

In a part of her speech, Mrs. Rajavi said, “Today at Ashraf 3, we are gathered at an Exhibition where 120 years of war of Iranian people for freedom have emerged. A struggle with countless ups and downs, with many defeats and triumphs, to which the tears and the smiles of a nation tied up with chains were crushed by two dictatorships, the previous monarchy and following it a religious and tyrannical regime. But we are leaning forward on the road to secure victory.”

Referring to the 120th anniversary of the War of Liberty, Mayor Giuliani said, “It’s a matter of listening to names and numbers, but it’s quite different to see the faces of 120,000 fallen-martyrs who lost their lives because all they wanted was that which belongs to us all as a human being: Freedom.”

Reuters published a number of images of this massive gathering and wrote a ceremony was held in Ashraf 3 where the PMOI/MEK are stationed in Albania. At this event, NCRI President Maryam Rajavi, U.S. Senator Joe Lieberman and former New York City Mayor Rudy Giuliani took part and delivered speeches.

The mullahs are counting on inaction and tolerance on the part of the international community. Their calculation is that terrorist operations and warmongering in the region’s countries will not cost them very much, at least until the next U.S. presidential election. #Iran

“Ashraf 3 welcomes you all. Twenty months ago, this was a piece of land with nothing on it.”

“At the hands of the Mojahedin, however, through their enormous efforts and hard work, Ashraf 3 was built and now stands tall. But our final destination is Tehran, freed from the occupation of the mullahs,” Mrs. Rajavi said welcoming the international dignitaries at the rally

” … Ashraf 3 stands tall along this long journey, a journey that has had many new beginnings and revivals throughout. On this path, we endured ten years of blood-drenched perseverance at the besieged Camp Ashraf and another four years full of determination at a slaughterhouse called Camp Liberty (in Iraq).”

“However, the reality is that schism and instability are among the signs that the regime is in its final chapter. The clerical regime is not going to find a way out of its inevitable downfall,” she said, forecasting the fate of the theocracy ruling in Tehran.

Describing the current situation in Iran where there is a nation standing steadfast against this tyrannical regime determined to topple it in oppose to a regime on the verge of its demise, Mrs. Rajavi concluded her speech.

“Today, two sides are facing off against each other over the fate of Iran. On the one side is a deadlocked regime, and on the other is a nation and its Resistance fighting for freedom.”

“Yes, there is an alternative that wants to reach the destination of freedom through resistance units, rebellious cities and the Army of Freedom. This alternative is capable of establishing a democratic and a pluralist republic based on the separation of religion and state, gender equality, the autonomy of Iran’s ethnic groups, and a non-nuclear Iran.”

“The National Council of Resistance of Iran has concrete plans and programs. Thanks to its organization and cohesiveness, the NCRI can replace the regime and is able to ensure a peaceful transition of power to the Iranian people’s elected representatives.”

“Yes, the day is not far when Iran, the Land of Lion and Sun, will embrace freedom.”

We are determined to create a new future, a new plan devoid of tyranny, reactionary thought, duplicity, and discrimination. A new design for a free and prosperous Iran.

So, we will sing in unison as we march toward victory: we will take back Iran and we will build a new homeland.

Yes, indeed, we will take back Iran.

There are three things we have to do. 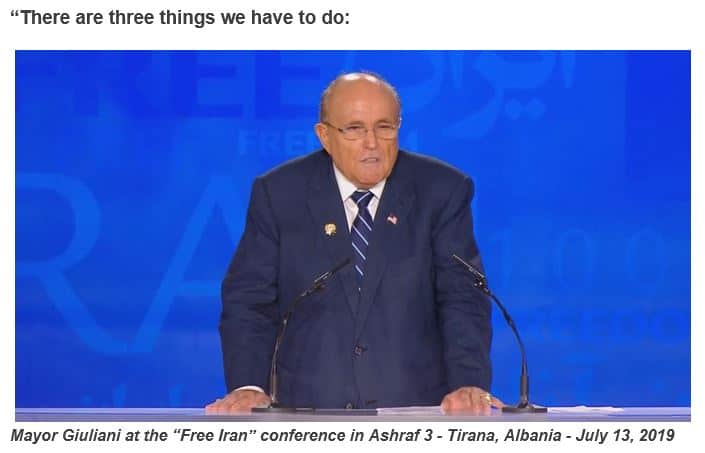 “These are countries that gave us Greece and Rome. They gave us democracy. Democracy for my nation came out of Europe. There is no statute of limitation on murder. You can not say the murder was 30 years ago. The people who murdered 30,000 people in 1988 must be prosecuted, imprisoned for life or executed.

This is a group we can support and a group that makes us comfortable to have regime change.

“So stand up leaders of Europe. Stand up in Germany, the UK, France, Italy. If you gave us freedom and democracy, don’t turn your back now on democracy and freedom.

“I’m proud of my government to tear up that nuclear deal. We don’t put nuclear weapons in the hands of murderers. When you put money in the hands of murderers, you are supporting murderers. When a German company makes business with Iran, they are helping to kill people in Syria or kill us here in Albania. You are funding murderers. That makes you complicit in murder. We don’t allow people to fund murder. Wake up. When you buy oil from Iran you are funding murder. Face it and stop it,” Mayor Giuliani continued.

2 – There is an alternative to this horrible regime of terror.

“This isn’t one of those situations when we have to dispose of a regime and we know that a more horrible regime will come. That was the case in Libya. But here we don’t have that problem. We have the biggest sponsor of terrorism in the world and then we have the NCRI, led by the President-elect Maryam Rajavi.

“We know there is a group of people who are dedicated to freedom and the cause of it, and that is what they call a cult these days because they are so cynical that they can’t understand decency and honor. Maybe something is wrong with you,” he emphasized, debunking the claims raised by the Iranian regime and its chorus of apologists/lobbyists in the West …

3 – You can be a witness in the biblical sense.

You know about the continuous murders in Iran. Why are the [mullahs] killing them for decades? How stupid can someone be not to understand that?

You can be a part of [stopping] it. You can write, you can speak out. We don’t walk away when we see someone is oppressed.

You can turn your back like the leadership in Europe, or you can go everywhere and spread the world. Stand up. My colleagues and I are attacked all the time in the U.S. but we can’t turn our back.

Tom Ridge, Louis Freeh and Bob Torricelli agree that NCRI (National Council of Resistance in Iran) is a very capable alternative to the Regime of Terror oppressing Iran for 40 years. They stand for freedom. pic.twitter.com/xaqzMkdDUS