It is difficult to assess political intent well, especially when it concerns Iran. But the facts are the facts; Iran is amassing military equipment and troops on its border with Azerbaijan, along with many excuses.

I can use many explanations, given by others, as to why Iran is for bedlam and I can use my own assessment as well. Whatever it is, Iran has been and remains a bad actor in the region and beyond, its intentions are not to be the leader of the Islamic Shiite world, as it claims to be, rather, to unbalance the world’s order and peace with its neighbors.

One such neighbor is Azerbaijan, a sister Shiite Muslim country that happens to be a well-refined society and thus has had positive bilateral relations with the Jewish state, Israel.

The question needed to be asked is, why did Tehran back Armenia against Azerbaijan, though mostly covertly, even though Azerbaijan’s population is majority Shiite, just like Iran?

One good reason for Iran supporting Christian Armenia was that while Armenia was occupying Azerbaijan’s territories, Iranian trucking enterprises were able to reach Russia, Europe and West Asia via the occupied lands without being stopped and/or paying any levy for its border crossing.

After Azerbaijan’s 2020 victory and the ceasefire stipulations, a 21km portion of the main highway connecting Iran with northern Armenia ended up on Azerbaijan’s internationally recognized territory. Azerbaijan kept that road open for Armenian and Iranian vehicles and trucks as a gesture of goodwill.

However, Baku came to realize that despite the end of the war, Iranian trucks were still transporting supplies to Armenian forces in Karabakh, using the same 21km road as well as the “Lachin Corridor,” which is under the control of Russian peacekeepers.

After Baku issued a complaint letter that yielded no result, Baku started charging the Iranian trucks a levy when entering the territory and upon their return from it, including inspecting the cargo the trucks were delivering. Making life more difficult for the already economically stressed Ayatollah’s regime and being an obstacle to Iran’s belligerence is no moot point.

So what exactly is Iran’s excuse for its military maneuvers on its border with Azerbaijan?

Reminding the Reader of Previous Facts

In April 2020 I penned an op-ed,“Iran’s Tentacles Scattered Around Armenian-Occupied Nagorno-Karabakh” in which I asked why Iran – a self-proclaimed “guardian of all the world’s Muslims”– supports the ongoing Armenian occupation of territories of majority Shiite-Muslim Azerbaijan.

During 30 years of illegal occupation of Karabakh, the one other problem Iran was causing Azerbaijan was using the Armenian-illegally controlled 132 kilometer of Iran-Azerbaijan border, to export drugs from Afghanistan to the West.

In August 21, 2021 I penned an op-ed about Iran-Armenia alliance that continues in Karabakh, with help from Russia in which I wrote, “For almost 30 years, the Republic of Azerbaijan had to walk in fuzzy international corridors seeking a peaceful solution to Armenia’s illegal occupation of around 20 percent of Azerbaijan’s sovereign territory, including the Nagorno-Karabakh region and 7 nearby districts.

The forces impeding the peace Azerbaijan was seeking for so long were Armenia and its main allies, Iran and Russia.

Commemorating One Year To The 2020 War

The government of Azerbaijan declared September 27 – the start of the 2020 44-day war – to be a Memorial Day. On September 27, 2021, Azerbaijan commemorated the 1st year of this war in which, according to Baku, some 3,000 servicemen were killed.

That day, Lee Litzenberger, U.S. Ambassador to Azerbaijan visited the country’s national cemetery and paid tribute to the memory of those killed (U.S. Embassy Baku @ USEmbassyBaku)

The same day, George Deek, Israel’s Ambassador to Baku, and the Israel Embassy staff stood for a minute of silence in solidarity with the people of Azerbaijan, respecting the memory of the victims. Mr. Deek said, “We pray for peace for the region, and convey our sympathies to the families of the victims.” (Israel Embassy Baku @ IsraelinAZ)

On September 30, 2021, as Iran was amassing troops on the Azerbaijan border and accusing Azerbaijan of collaborating with Israel, U.S. and Israeli Ambassadors visited the Jewish Red Town in Azerbaijan’s Quba region. 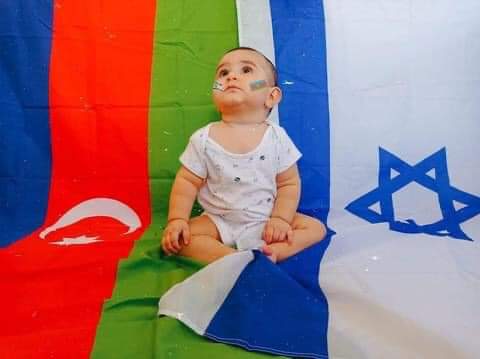 Iran Antagonism is Back

Iran and Azerbaijan share a border of around 700-kilometers (434.96 miles). Baku has a valid concern regarding the freight the Iranian trucks carry.

In September 2021, Azerbaijan seized a large heroin shipment bound for Europe; 527.6 kilogrammes (about 1,160 pounds) of heroin – with a street value of $80 million – was found during an inspection in a car travelling from Iran to EU member Latvia.

The escalating tension with Azerbaijan has somewhat complicated the border passage for Iranian trucks that claim to ferry fuel and other goods from Iran to Armenia.

Israel-Azerbaijan friendship has never been a secret since Azerbaijan became independent from the Soviet Union, in 1992. Azerbaijan’s relations with Israel include oil supplies to the Jewish state from Azerbaijan and military aid to Azerbaijan from Israel. The two countries are also cooperating in areas ranging from agriculture, medicine, renewable energy to tourism, education and startups.

This in stark contrast to Iran’s theocratic regime, which regularly calls for the genocide of Israel’s Jewish population as well as constantly engages in crude anti-Semitic propaganda within the country and worldwide.

Because of the above reasons, Israel is just the thin veneer excuse for Iran’s behavior at its border with Azerbaijan.

Iran is using the ‘Zionist regime,’ – Israel – that has had close relations with Azerbaijan for many years, as an excuse to amass military equipment and personnel on its border with Azerbaijan.

Iran decided to challenge its claim to the ‘presence of Israel’ in Azerbaijan with military exercises on its mutual border. The exercises titled “Conquerors of Khaybar,” in reference to the defeat and ultimate ethnic cleansing of a Jewish tribe in the Arabian Peninsula by early Muslim army, include a large amount of materiel, such as armored units and attack helicopters.

Iran’s ground forces chief Kioumars Heydari described the ‘presence’ of Israel in Azerbaijan as “disrupting security” in the region, and Iran’s sensitivity toward the border has increased and [Israel’s] activities there is completely under Iran’s surveillance.

This is all a LIE and an excuse because Israel has as much presence in Azerbaijan as Iran, an ambassador and embassy!

More so and perhaps, Iran now feels free to act against Azerbaijan, not only because of the weak US Biden administration lacking deterrence, but also there is no deterrence from Israel, which is being restrained by Team Biden, though this is being denied by Bennett’s government, Mike Doran Twitted.

At a time when tensions in the South Caucasus are at their peak, a new excuse, the decades-long close relationship between Azerbaijan and Israel, is fomenting. Interestingly, Cyprus and Armenia have signed a military cooperation agreement.

In a recent interview on state television, Hossein Amir Abdollahian, Iranian Foreign Minister, claimed that Israel is taking advantage of the war between Azerbaijan and Armenia to establish a foothold there, thus moving closer to Iran’s border. In this interview Abdollahian said that Tehran had the right to hold exercises and he underscored the “importance” of cooperation between Iran and Azerbaijan. However, Tehran is very concerned about the Zionist regime’s being present in the vicinity of Iran’s borders.

Adding fuel to the Iran Azerbaijan border escalation, Armenian National Committee of America (ANCA), which has no empathy for Jews and Israel, issued a statement on Twitter that Israel’s Ambassador to Baku George Deek “openly conspires with #Azerbaijan to complete the crime his ancestors survived.”

ANCA’s outburst was in regards to the statement Ambassador Deek made, while visiting with US Ambassador the Jewish community in Guba: “While Iran oppresses its religious and ethnic minorities and targets Jews in other countries, we, Israel, the United States and Azerbaijan – invest in our diversity and tolerance.”

According to the Baku-based APA news service, Seyyed Abbas Musavi, Iran’s ambassador in Baku said the exercises “can’t be seen as a threat to our friends,” and that Azerbaijan had been told about them months earlier.

According to Iran’s semi-official Fars news agency, in a reference to Israel’s ties to Azerbaijan, a senior cleric in Iran ‘defended’ the Islamic Revolutionary Guard Corps’ (IRGC) decision to hold military drills near the border with Azerbaijan as “a message to Israel not to make any mistakes.”

Azerbaijan President Ilham Aliyev responded to Iran’s allegations about Israel’s presence in Azerbaijan near its borders: “We show good intentions. But this does not mean that we will accept baseless accusations against ourselves. I say this here – in Jabrayil, on the banks of the Araz River, Azerbaijan will continue to plan its foreign relations and domestic affairs as it desires. Let no one poke their nose in our affairs.”

I am prepared to state here that Baku needs to be cautious of Iran’s acts of belligerence. However, with powerful allies such as Turkey, Pakistan, and, you know, those folks from across the Mediterranean basin, Baku can be somewhat at ease.

Azerbaijan’s Jewry, Past, Present and Future, a Nestled Jewel – Part I

Next Year In Lachın, The Displaced Azerbaijanis Prayed For 30 Years

Iran-Armenia Alliance Continues in Karabakh, With Help From Russia

Armenia Never Sought To Peacefully End Its Conflict with Azerbaijan

Armenia, a Bad Actor in the South Caucasus and Beyond