On Tuesday and Wednesday, July 14 and 15 in the 50 degrees Celsius hot weather, by order of Faleh Fayyad, the Iraqi forces at camp Liberty prevented entry of food, fuel and septic trucks to the camp.

At the time that due to extremely hot weather, the Iraqi government announced Thursday a holiday, on Tuesday and Wednesday, 14 and 15 July 2015, upon the orders of Iraqi national security advisor Faleh Fayyad, the Iraqi forces at gate 4 of Baghdad Airport, intentionally prevented the entry of diesel fuel tanker and gasoline, septic and food trucks to Camp Liberty to harass camp Liberty residents.

The Iraqi forces at gate 4 said that they have been instructed by the national security office headed by Faleh Fayyad (in charge of the committee to suppress the Iranian opposition) that from today no vehicle including fuel, food and septic trucks can enter camp Liberty. 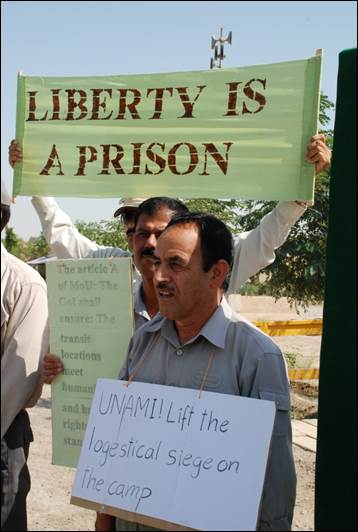 These vehicles have been delivering the vital needs of the residents to the camp in the past four years. But, since yesterday the National Security Forces have prevented the entry of these vehicles to the camp and they have threatened the drivers.

Also today, Wednesday, in addition to the diesel fuel tanker and the gasoline truck, two food trucks and five septic trucks arrived at gate four, but the Iraqi forces once again told the drivers that the National Security office headed by Faleh Fayyad have instructed them not to allow any vehicle providing logistical needs of camp Liberty to enter the camp.

Camp Liberty is currently on the brink of a humanitarian crisis and catastrophe because all the camp’s infrastructure, including water supplying system, sewage system, kitchen, cooling etc. rely on the electricity produced by the power generators. Therefore, prevention of delivery of fuel to the camp would result a cessation of all the camp’s systems while the temperature is 50 degrees C, especially in the month of Ramadan.

Prevention of entry of septic tankers at the very hot temperature would create a very serious hygienic crisis for all the camp’s population. This criminal and inhumane measure of the suppressive committee headed by Faleh Fayyad, who receives his orders from the Iranian regime, is with no doubt considered a crime against humanity and its perpetrators are internationally prosecutable.

In letters to U.S. and UN authorities, the Iranian Resistance had warned earlier on June 26 that the mullahs’ regime and its embassy in Baghdad have asked the Government of Iraq and Faleh Fayyad to intensify the siege and restrictions on Camp Liberty and the repressive measures against it.

The Iranian Resistance calls on the UN and the U.S. government, who have repeatedly committed themselves to safety and security of Liberty residents, as well as the EU Member States to take immediate measures to avert a humanitarian catastrophe.