After more than two decades of absence, the once-powerful Somali football Club ‘Jeenyo’ has once again returned into the field of football with the name of Jeenyo United under the leadership of the club’s former players.

A colorful ceremony which intended to mark the rebirth of the old club was held at the Shamo hotel in Mogadishu on Sunday 11th of March 2012 in the presence of Somali Football Federation dignitaries, football legends and fans.

The club’s technical director Abdi Hakim Osman Dirie told the participants of the recreation ceremony that the idea of the reestablishment of the old club came from its former players and fans who have been working on how to re-launch it for the past six months. 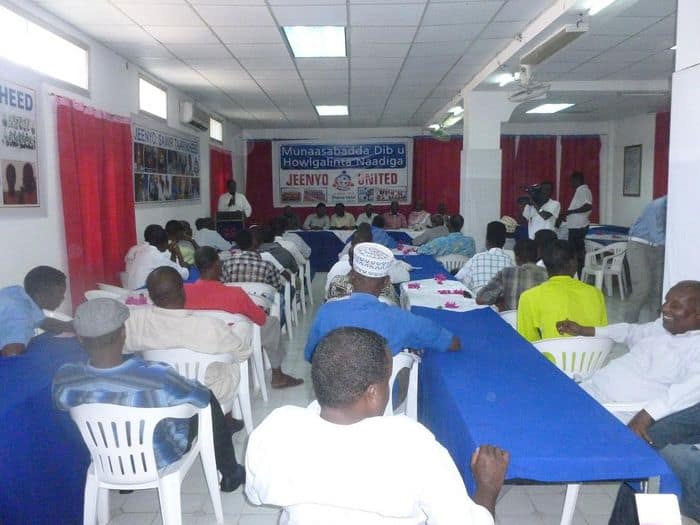 “We are very grateful to the Somali Football federation who fully lauded for the idea when we informed that we were going to re-establish the well-known club which was once one of the strongest pillars on which Somali Football stood,” the technical director told the recreation ceremony.

Abdullahi Elmi Warsame popularly known as Witig who was one of the club’s players just over decades of years ago said that seeing the rebirth of Jeenyo was a very great day in his life time.

“Our club was the strongest in Somalia and it had the biggest number of fans in comparison with the rest football clubs in the country in my era. I hope it will once again became the leading club in Somali Football,” the football legend noted. 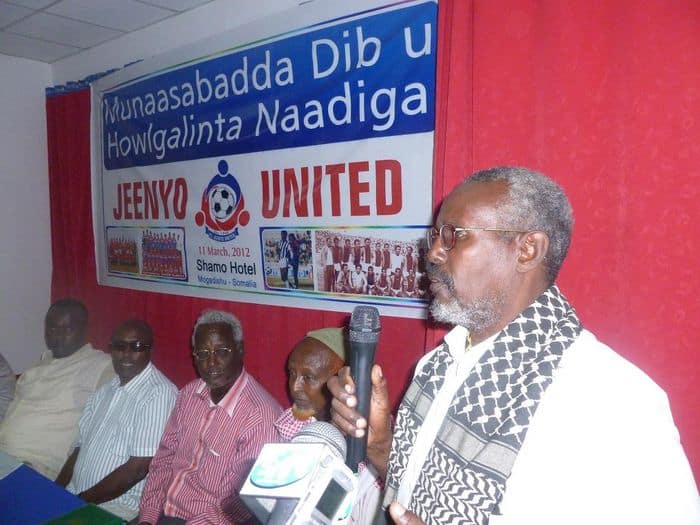 The Shamo Company which owns Hotel Shamo and other big businesses in and outside Somalia was the club’s sponsor. Mohamed Ahmed Matana who addressed the ceremony on the behalf of the company said his company was very much jubilant at the return of Jeenyo football Club.

“We always supported the club and here in front of you I declare that will support it as we did previously,” Matana told the ceremony.

Somali Football Federation secretary General Abdi Qani Said Arab who addressed the ceremony praised the 25 football clubs who have been working in the country for the past 22 years of anarchy and civil wars whom he said had protected Somali football from destruction.

“From 1991 up to the present time, football is working in Somalia under the commitment of the 25 clubs and other volunteers of whom some were killed while some others became disabled during the work of promoting of football in Somalia,” the secretary General noted. 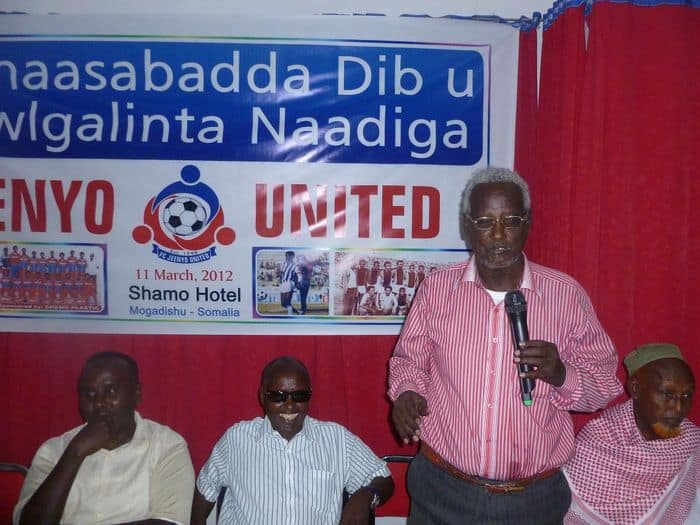 He added that during the difficult period Somali Football has reached some tangible progress.

“Other old clubs like Horseed, Mogadishu port FC and Heegan had already been reestablished and they are now in a good position in the country’s division one championship-we hope that other former clubs will revive in the months to come,” secretary General said.

Somali Football Federation President Said Mahmoud Nur said it was a very cheerful moment for the whole Somali Football family to witness the return of Jeenyo FC after 22 years of absence.

“On behalf of Somali Football family, I am sending my greetings and congratulations to Jeenyo’s former players and fans who initiated to reestablish it and we hope that in the years to come many Jeenyo players will represent the national team as we previously learned from the club,” the SFF president noted.

During the ceremony a minute f silence was observed in the remembrance of the father of Somali Sports and the former chairperson of Jeenyo Nur Hussein Abdi who devoted much of his time, energy and money in developing the country’s sport. The late father died in UK in August 2007.

Jeenyo was the sole club that won the General Da’ud cup for six times. The competition is an interesting football event in Somalia and it is annually held in the remembrance of the founder of Somali Military General Da’ud Abdulle Hersi. 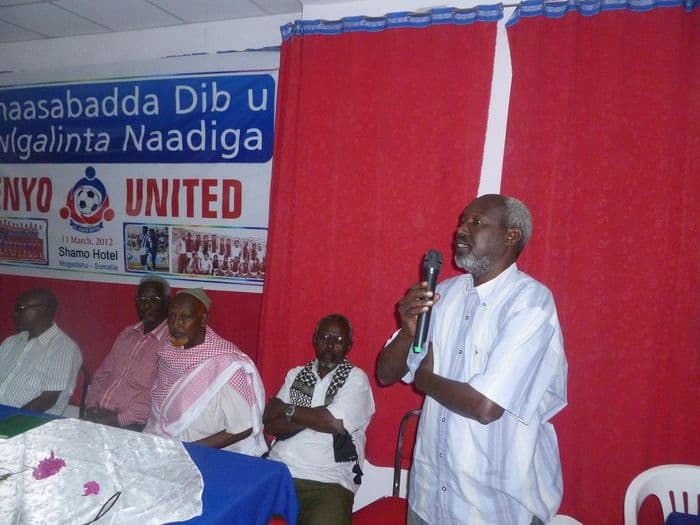 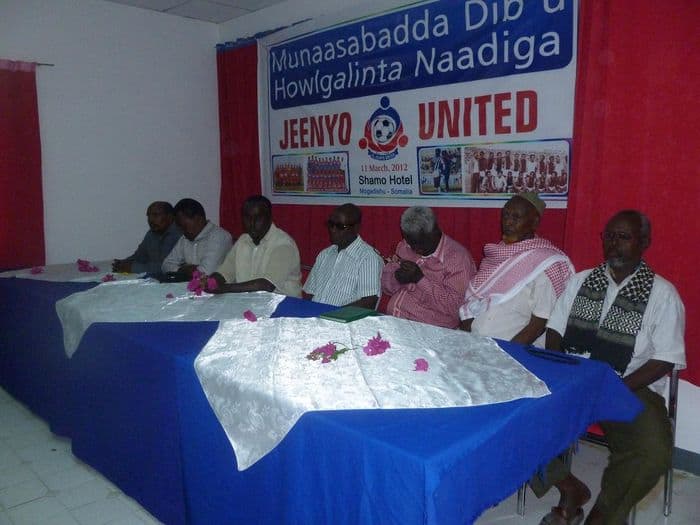 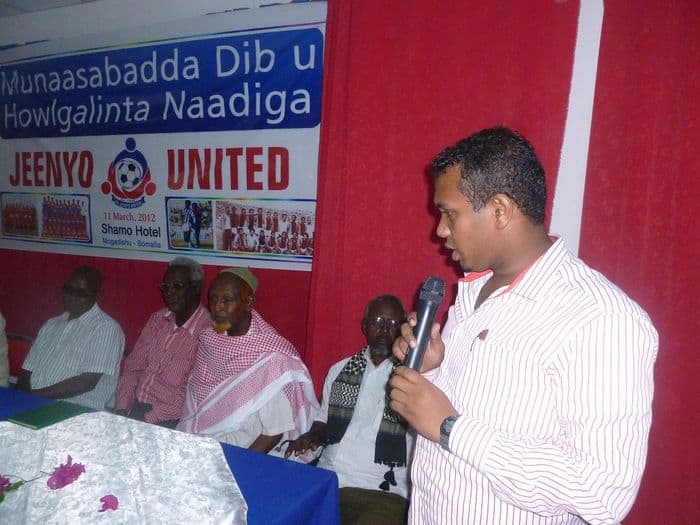 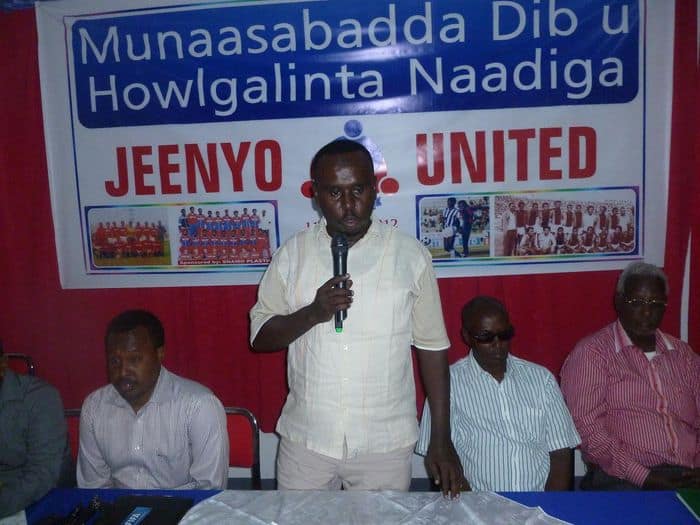 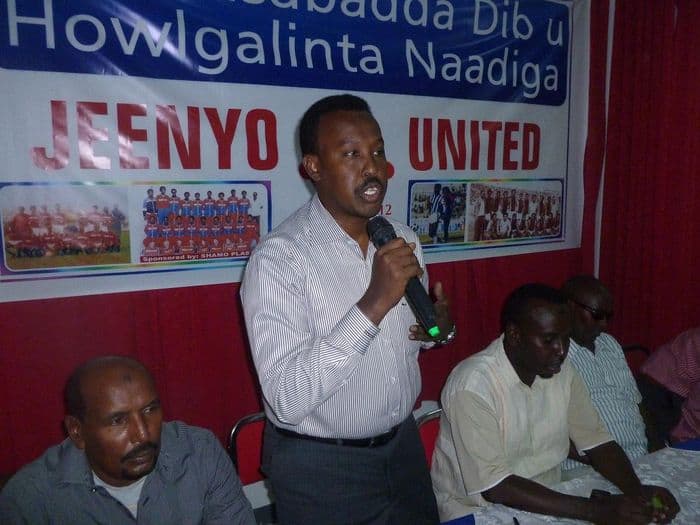