The fire and emergency services department in the Somali capital, Mogadishu, has been in action since December 2012. Members of the Somali community in London have for the first time announced their plans to help develop the department which currently has only three fire engines and plans to expand its services throughout the country. 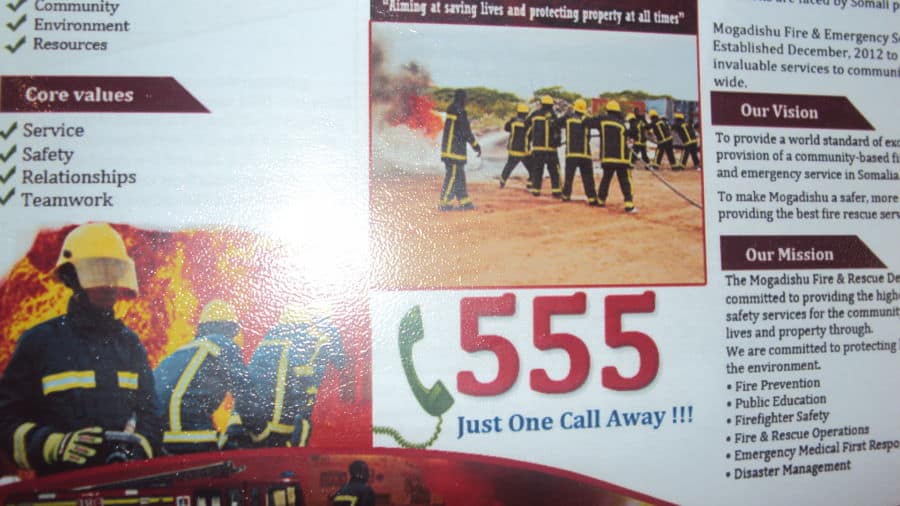 The community leaders made the pledge during a lengthy meeting with the director of Mogadishu Fire and emergency services Abdullahi Mohamed Saney in Edmonton Green, north of London on Sunday evening.

As a Muslim community, the meeting was opened with the recitation of Holly Quran verses by Ahmed Bile and then participants started to exchange ideas and suggestions that a huge support is necessary to help the department progress.

“We have been aware of the good job you are doing and we can say that you (Mr Saney) and your group are doing an unprecedented service for the Somali people, we will draw programs relating to what role we can play,” Mahmoud Ismail Dabayare told the meeting.

Mohamed Ahmed Deysane added that the fire and emergency services department came at the right time that Somali people had much need for it and thanked Mr Saney for his successful endeavours to re-organize the programme.

Mr Saney first briefed the community members on how they work, what they do and the obstacles they have been facing since the launch of the service nearly 18 months ago.

“We have only 3 fire engines in a city of three million people, so that means we are serving one fire engine for one million people and you can understand how much need is there,” Mr Saney said, adding they face a greater problem from Somali government forces when fire engines or ambulances are running to extinguish a fire or to take a pregnant woman or a bleeding person to the hospital.

“If I tell you one of the worst evidences we experienced was that one day, the ambulance was carrying a man with very serious injuries rushing to the hospital and the road was blocked; we told the soldiers that there was a man bleeding on the ambulance and we were rushing to the hospital, but they replied even if Abdi Bile which we call the (Toyota Pickup track mounted with machineguns) comes the road will be blocked, they give respect to the battle wagon rather than the bleeding person.”

He told the group that unfortunately, the bleeding man died, while the ambulance was still standing at the roadblock.

However, he said that in recent months something changed and people are giving way when they hear the sound of the ambulance or the fire engine.

“When the people hear such sounds now they understand there was a risk of fire or the ambulance is rushing someone to the hospital, but still the roadblocks are great obstacles,” he added.

“We have got more pledges and we hope to have scores of fire engines for the years to come” said Mr Saney who thanked the Leicester City council and as well as the Leicester-based charity Iqra Aid trust for sending two fire engines to the country.