The left enjoys a 90 percent favoritism over conservative media, but that’s not enough. They constantly scream for advertiser boycotts of Fox News since it is the only major outlet that challenges their ‘progressive’ point of view.

But where do Democratic presidential candidates gravitate to these days when they want a sizable TV audience? Why, Fox News of course. They know very well that the shrinking audience on CNN and MSNBC will consist of viewers already sold on their campaign cries for free everything. The ideal situation is to convince conservatives that their ideas are free, not paid for by taxpayers.

Who Is Amy Klobuchar?

Last week is a case in point. Sen. Amy Klobuchar (who?) is a Democratic presidential candidate from Minnesota. She is circling the drain in terms of name recognition and her only real hope of notoriety is to get in front of audiences other than kids in their parent’s basements or NE elites who think supporting a woman liberal shows ‘compassion.’

So, Amy went to Fox last week with her ‘Town Hall event.’ Yup, conservative, high in the ratings, Fox News. It was a wise choice considering the tanking ratings at CNN and MSNBC where viewers were subjected to two years of Trump Russian collusion only to be told last month it was all a hoax.

According to Nielsen Media Research, Fox News averaged 1.6 million viewers from 6:30-7:30 p.m. ET during the Klobuchar town hall, which was hosted by Bret Baier and Martha MacCallum. During the same time period, MSNBC averaged 1.5 million viewers and CNN just 759,000. 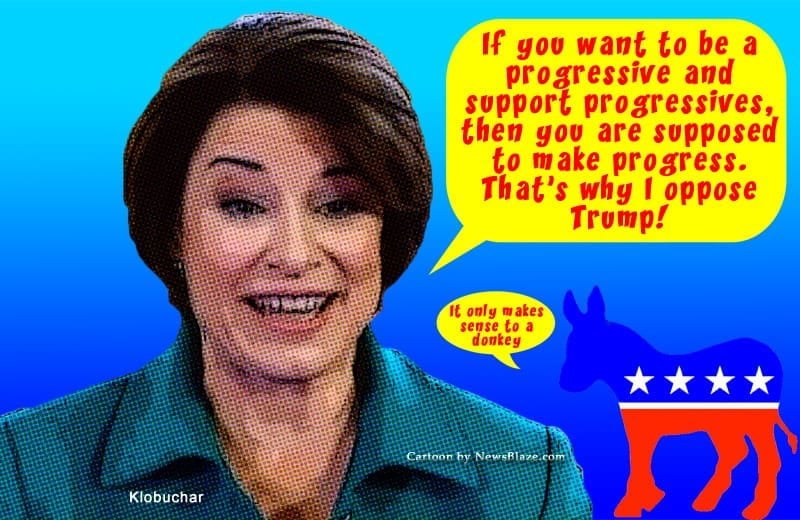 Oh, Amy had tried out CNN in the same sort of venue. However, her appearance on the fading network wasn’t much help. According to TVNewser, Klobuchar’s CNN appearance on April 22 averaged only 869,000 viewers, if you include the crickets and sagebrush. That was far behind both Fox News and MSNBC.

To put this in perspective, the Fox News audience for Klobuchar was 85 percent larger in total viewers and 28 percent higher among the key demographic compared to her appearance on CNN.

One audience member asked her why they should support her over the 20 or more other candidates. Her reply was classic. She said, “Progressives should support me because I’m a proven progressive. The last time I checked, if you want to be a progressive and support progressives, then you are supposed to make progress. All right? And that is what I have done. That it is what I’ve done my whole life,” Klobuchar told the Wisconsin audience.

Can’t you hear the thunder of levers being pulled for Amy Klobuchar?

Meanwhile, back in the land of reality, ratings-challenged CNN provided a voluntary buyout of more than 100 employees as they move into new headquarters in the Hudson Yards area on the West Side of Manhattan. I guess you have to provide the façade of success while you drown in red ink.